Syria Videos: The Emergency Evacuation of Ma’arat al-Num’an in the Northwest 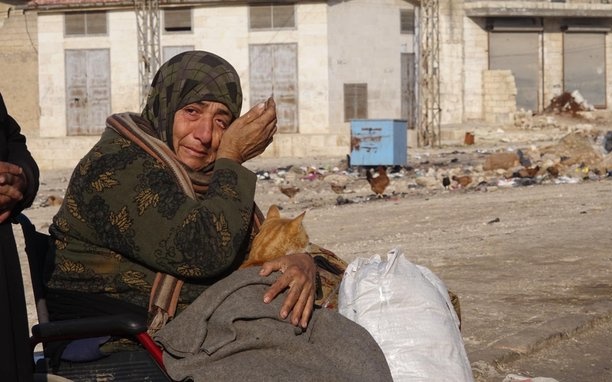 An elderly woman cries as she is evacuated before a Russia-regime offensive occupies Ma’arat al-Num’an in Idlib Province in northwest Syria, December 2019

As more than 210,000 Syrians flee the latest wave of the Russia-regime offensive in northwest Syria, citizen journalists have recorded the emergency evacuation.

Russia and the regime stepped up bombing and shelling last week to advance on Ma’arat al-Num’an, a city of 70,000 in Idlib Province, the last major opposition territory in the country. Attacks added hundreds of casualties to the more than 1,200 civilians killed, thousands wounded, and more than 00,000 displaced by the offensive since late April.

With Russia blocking the extension of cross-border aid by the UN Security Council, local humanitarian agencies launched an emergency mobilization to evacuate almost all civilians from the Ma’arat al-Num’an area. Convoys risked Russian and regime bombing, which continued despite the UN’s announcement of a “pause” — in an e-mail to NGOs — on Tuesday.

In a 25-minute video, Abdullah Jabbar documents the first day of the flight from the “apocalypse” of Ma’arat al=Num’an.

Aerial photography of the city of Maarat al-Numan today.#insanlıkoelueyor#save_us#IdlibUnderFire#İDLİBÖLÜYOR#İNSANLIKÖLÜYOR#ادلب_تحت_النار pic.twitter.com/wKQhw50ClY

Anas al-Maarawi, who is among the displaced, posts a video from activist Khatib al-Idlabi from inside the town of Talmanes, east of Ma’arat al-Num’an.

British TNT channel Activist Khatib Al-Idlabi sends a message from inside the town of Talmans, east of Maarat al-Numan, in the southern countryside of Idlib pic.twitter.com/wFU3rYsXhp