Iran Daily: A Saudi Easing of Tensions with Tehran? 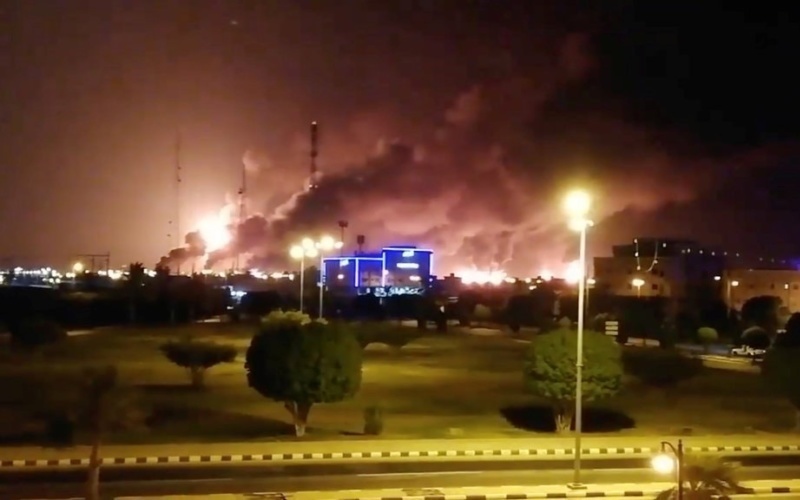 Fires at an Aramco oil facility in Saudi Arabia after drone strikes, September 14, 2019

Iranian outlets have seized on a report, from The Wall Street Journal, that Saudi Arabia is seeking an easing of tensions with Tehran.

The Journal article points to the significance of a September 14 drone and missile attack on a major Saudi oil complex, widely blamed on Iran, for Riyadh’s attempt to diminish risks.

“The September 14 attack was a game-changer,” a Saudi official said.

A “senior US official” echoed, “Realpolitik has set in….They’ve just got to pare down on the challenges they have on multiple fronts.”

Saudi, European, and US officials say there have been direct exchanges of messages between Riyadh and Tehran, as well as communication through Omani, Kuwaiti, and Pakistani intermediaries.

The Iranian Ambassador in Paris, Bahram Qasemi, said the Islamic Republic has offered the Saudis a mutual pledge of nonaggression and cooperation to secure oil exports.

In the run-up to the September strikes, there were attacks on shipping in the Persian Gulf, including the Strait of Hormuz through which one-fifth of the world’s oil passes. Tankers, including two from Saudi Arabia, were damaged by explosion in a UAE port. Iran’s forces also seized a UK-flagged, Norwegian-owned tanker, retaliating for the impoundment of an Iranian tanker — allegedly breaking sanctions on oil shipments to Syria — off the coast of Gibraltar.

In October, Tehran said an unnamed foreign government was responsible for explosions on an Iranian tanker.

Arab and US officials said Saudi Arabia is also involved in secret talks with the Iranian-backed Houthi insurgency that has taken control of much of Yemen. In May 2015, a Saudi-led coalition launched a military intervention which is blamed for the killing of thousands of civilians, in a civil war which has threatened millions with starvation and deprivation.

The Houthis, who moved into the Yemeni capital Sana’a just before the Saudi intervention, offered a unilateral ceasefire in September. Riyadh has responded with a partial halt of operations.

Saudi Arabia has faced an erosion of support over the war in Yemen and the involvement of senior officials — reportedly including Crown Prince Mohammed bin Salman — in the October 2018 murder of writer Jamal Khashoggi in the Saudi Consulate in Istanbul, Turkey.

US lawmakers seeking a cutoff in backing of Riyadh have been further spurred by last week’s killing of three US sailors at a Florida military base by a Saudi Air Force trainee.

The Kingdom is also trying to safeguard its initial public offering of the oil company Aramco, which started trading Wednesday. The valuation target of $2 trillion is sought for funds to propel real estate, tourism, and technology projects.

Iran Welcomes Reports — But Omits Reference to US Sanctions

Iran’s delegation to the UN and Ambassador Qasemi offered no comment to The Journal.

But the leading outlets Iran Daily reprinted and Tasnim reprinteed much of the Journal article almost word-for-word under the headline, “Saudi Arabia Seeks to Ease Tension with Iran”.

Significantly, both omitted the Journal’s paragraph:

Tehran, hard hit by the Trump administration’s “maximum-pressure” campaign of economic sanctions, has expressed an interest in detente. Despite years of enmity, Iranian officials have previously raised the hope that Saudi Arabia could act as an intermediary in an economic-relief package—using its special relationship with Washington to end sanctions rather than encourage them.