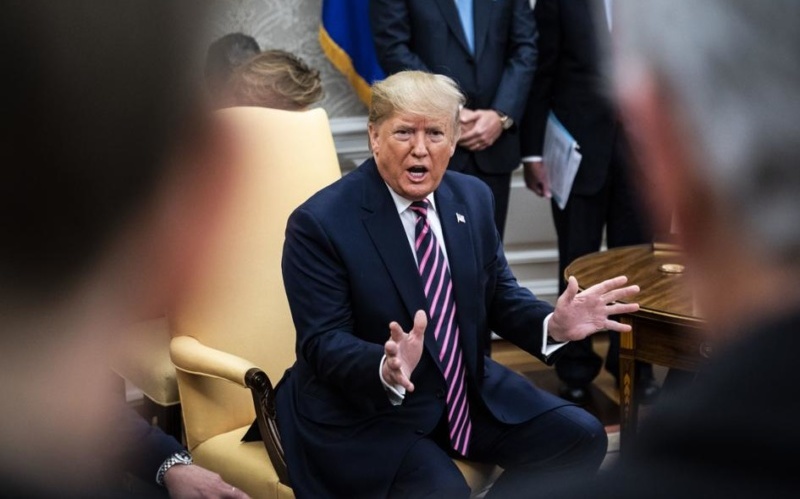 Facing impeachment this week, Donald Trump cuts the losses from his trade war with China.

The White House said Friday that it has reached a “Phase 1″ agreement with Beijing, 23 months after Donald Trump imposed his first set of tariffs on China, the European Union, India, Canada, Mexico, and other countries.

The Administration immediately tried to frame an “amazing” and “historic” deal, but was soon checked by a counter-narrative from China and by the reality of the agreement, whose details have still not been made public.

Beijing refused to confirm Washington’s announcement for several hours and then, in a rare news conference, focused on their supposed victory that meets the “growing needs of the Chinese people”.

Then news established that the deal is more of a pause in any escalation of Trump’s trade war, rather than a settlement. US and Chinese officials said Trump had suspended a sharp increase in tariffs, due December 15, in return for China buying more US agricultural products and other goods and offering entry to some US financial firms.

Limiting Some — But Not All — Damage

US officials said China will buy $32 billion of agricultural products, surpassing a previous high of about $26 billion in 2012. (Trump has asserted that the purchases will probably “hit $50 billion”.) Beijing is not confirming an amount, although they have said they will increase imports.

The measure could save American farmers from collapse before Trump’s tariffs. Farm bankruptcies are up 24% from 2018, and farm debt is projected to reach a record high.

US shops and consumers will be spared the shock of Trump’s December tariffs, which would have been slapped on products such as cellphones, laptops, and toys, and September’s duties on items such as clothing and shoes were halved from 15% to 7.5%. Apple was among the companies whose stock rose on Friday.

It is unclear yet how much money will be recouped by the companies from Trump’s partial step back. The Tax Foundation says the bill has been $88 billion so far, with firms passing some of the cost to consumers through increased prices.

US financial institutions will be hoping to benefit from Beijing finally allowing banks and credit card companies to enter China without a partnership a local Chinese company. JPMorgan Chase had already started the preliminary work this summer to open in China.

But far from suffering defeat, China gave up little in the Phase 1 measures. In mid-2018, after Trump’s initial tariffs, Beijing had offered the increase in purchases that it projected on Friday. The Chinese did make a token commitment to penalties if it doesn’t fulfil the agreement, but the Trump Administration has to go through a lengthy process before imposing punitive duties.

And without any Phase 2 deal, many American businesses still endure heavy burdens. Trump still has tariffs on about $370 billion of Chinese imports, more than half the annual total to the US. These include 25% duties on many parts used in manufacturing, especially for automobiles.

The core issues between the US and China, such as Beijing’s alleged theft of intellectual property, are not addressed by the Phase 1 arrangements.

The White House spin is of a successful President getting business done despite impeachment. On Tuesday, Trump and House Democrats announced agreement on a revised trade deal with Mexico and Canada.

The US-Mexico-Canada Agreement updates the North American Free Trade Agreement. It was reached by the three countries in September 2018, amid Trump’s threat of punishing tariffs on North American partners. But while the White House tried to portray a sweeping victory, most of the revisions fulfilled Canadian and Mexican ambitions.

The White House and Trump tried to frame Tuesday’s announcement as Democrats giving way to their political skill.

“The President wants victories — I’m not going to say he doesn’t — but the timing of it is far more about the Democrats feeling pressured because a lot of these things the president negotiated long ago,” said Marc Short, Chief of Staff to Vice President Mike Pence.

But Democrats noted that they obtained nearly every concession sought from the Administration, including strong enforcement mechanisms over provisions such as labor standards. House Speaker Nancy Pelosi told Democratic legislators, just before announcing the agreement, “We ate their lunch.”

The only reason Pelosi moved on USMCA is because she took [US Trade Representative Robert] Lighthizer, flipped him upside down, and shook all the money out of him and destroyed him

Democrats won on substance; Trump won on the politics of USMCA. And that’s because Trump doesn’t care about substance.