Iran Daily: Rouhani and Supreme Leader on Petrol Protests — “We Will Not Tolerate Insecurity” 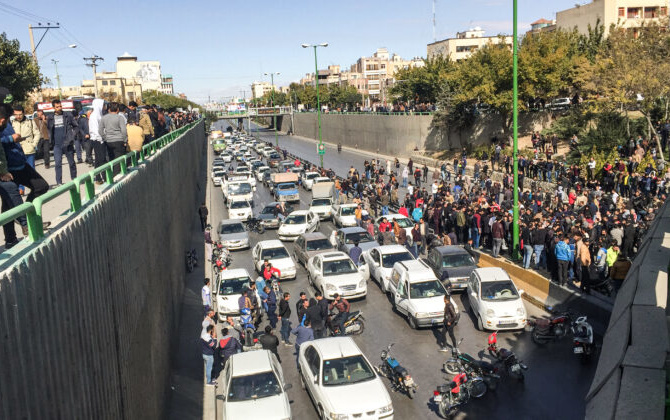 Parliament Speaker Ali Larijani has reinforced the line that the US is responsible for the petrol protests.

Larijani said at a Parliamentary session that Washington will not succeed through encouraging riots and sabotage and “setting on fire the public wealth”.

Echoing the earlier statement from the Foreign Ministry (see original entry), Larijani said a Twitter message from US Secretary of State Mike Pompeo — “The United States is with you” — proved the “dishonesty” of the Trump Administration.

ORIGINAL ENTRY: Iran’s President Hassan Rouhani and the Supreme Leader have warned mass protests, over a sudden increase in petrol prices, that the regime will not tolerate the spread of “insecurity”.

Rouhani spoke after a Cabinet meeting, soon after the Supreme Leader called on Iranians to ” separate themselves from” the marches triggered by an announcement — at midnight on Friday — of the reduction in subsidies triggering a price rise of at least 50%.

After implementing this plan, we saw that some people took to the streets to protest. I believe that it is natural when the administration implements a plan and not everyone agrees to it. Some people may be opposed and they have the right to give voice to their opposition.

What the government has done was in accordance with the law….We act on the basis of the law and what we finalized was agreed upon by the heads of the three branches of the government [Rouhani, Parliament Speaker Ali Larijani, and judiciary head Ebrahim Raisi].

Protests rapidly grew throughout Saturday in cities such as the capital Tehran, Shiraz, and Bushehr. At least one protester was confirmed to have been killed, with unconfirmed claims of others. Images on State TV showed burning of tires and fires in some buildings, reportedly including a bank.

Ayatollah Khamenei intervened early Sunday. Acknowledging “several people have been killed and some places were damaged”, he insisted, “The heads of power branches have sat down and taken a decision supported by experts. The decision must be implemented.”

He said, “Some people of course become worried or unhappy about this decision,” but he immediately blamed — citing the burning of the bank — “rebellious, malicious, disreputable people”.

Significantly, he used the label used by the regime — “sedition” — to challenge the mass protests in 2009 after the disputed Presidential election: “Sometimes, some young people go along with [the disreputable people] in the excitement and cause this sedition.”

Khamenei attributed the protests to foreign powers — “all of the centers of villainy around the world” — the descendants of the Shah (“the sinister, evil Pahlavi family”) and the “evil, criminal group” of the Mojahedin-e Khalq, which has sought the regime’s overthrow since 1979.

“Protesting is Different from Rioting”

I tell our dear people that protesting is different from rioting. Protest is a right for all the people and they can protest…but we must not allow insecurity in the society.

It will be unacceptable to misuse the people’s right to protest and attack banks, police stations, and the Islamic Republic of Iran Broadcasting’s offices.

The government will not allow anyone at all to [create] chaos and insecurity.

Authorities have all but cut off Internet inside Iran, with speeds reported at 5% of normal. The President’s official site has been off-line since Sunday.

With over 300 networks disrupted, #Iran's internet shutdown is one of the most complex we've ever tracked. Simply switching it off took ~24 hours 🤦‍♂️

National connectivity now hovers at 5% with a few pockets of connectivity remaining to the outside world.https://t.co/UigsReEzIi

The Government measures raise the the price of subsidized petrol from 10,000 rials to 15,000 rials (12.7 US cents) per liter. The monthly ration for each private car is now 60 liters per month — with the price at 30,000 rials per liter after that.

Authorities are trying to combat fuel smuggling to neighboring countries amid comprehensive US sanctions on Iran’s oil exports. The Government is also facing budget difficulties with the fall in exports of between 80% and 95%.

Trying to limit opposition, Rouhani’s advisors have said revenues from the increased petrol prices will go towards additional subsidies for 18 million families — about 60 million of Iran’s 82 million population.

State media supported the messages of Khamenei and Rouhani with images claiming to show violent protesters and with Monday morning’s statement from Foreign Ministry spokesman Abbas Mousavi that “the actions of a group of anarchists and saboteurs who are supported by the likes of” US Secretary of State Mike Pompeo.

As I said to the people of Iran almost a year and a half ago: The United States is with you. https://t.co/D972wPyLxm