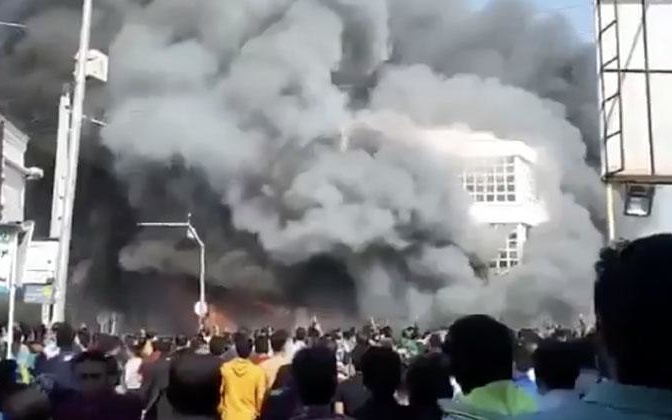 Protests in Behbahan in southwest Iran, as smoke rises from a burning bank

As Iran’s authorities continue a crackdown after last month’s mass protests over rising petrol prices, another 650 people have been arrested.

The demonstrations were sparked on November 15 by the Government’s midnight announcement of a 50% to 200% surge in petrol costs. Over the next four days, security forces fired on protesters, who were accused of being instigated by foreign actors to burn banks — a target of anger because of corruption and loss of personal savings — and Government buildings.

Amnesty has reported confirmation of at least 304 protesters slain by Iranian security forces between 15 and 18 November. Many of them were shot at close range and some as they were fleeing, Amnesty assessed from witnesses inside Iran and from verified video.

Iranian authorities have not released an official court of deaths or arrests. However, dissident Iranian MPs, human rights organizations, and activists say at least 8,000 people have been detained, and arrests are continuing, including of students in raids on their homes. Amnesty International says thousands of detainees are at risk of abuse or torture.

On Wednesday, the police chief in Kermanshah in western Iran, Ali Akbar Javidan, said another 250 protesters have been arrested, most of them between 20 to 35 years old.

Javidan claimed that those seized are “thugs, provoking others to stage mutiny, destroy of public and private property, and attack the police and Basij militia”, and that some have confessed to links to “terrorist groups and the enemies of the revolution”.

A day earlier, officials declared more than 400 other arrests in Alborz Province near Tehran and Khuzestan and Fars Provinces in southern Iran.

MPs Ali Motahari and Parvaneh Salahshouri are among those calling on authorities to provide justification for the arrests.

Last Friday the police chief of Khuzestan Province in southwest Iran said 136 people were arrested over “shooting and illegal possession of guns”.

The province has been the site of some of the bloodiest episodes in the protests, with witnesses claiming that scores of protesters were killed when security forces used tanks and heavy machine guns in marshlands near the city of Mahshahr.