EA on BBC, Radio FM4, and talkRADIO: Trouble for Trump After 1st Day of Impeachment Hearings 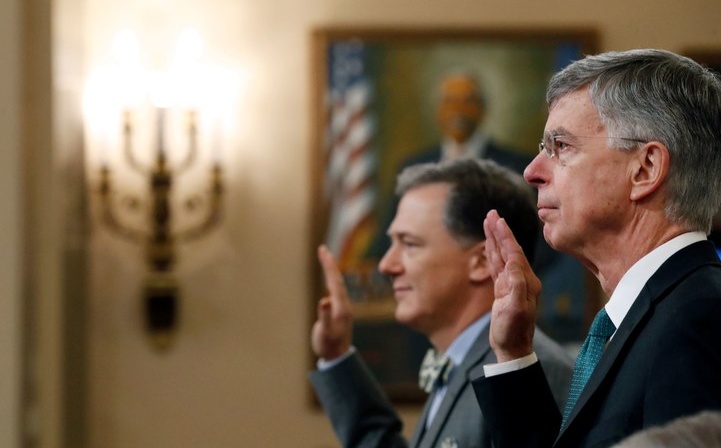 US diplomats George Kent and William Taylor are sworn in to testify at the public impeachment hearing into Donald Trump, US Capitol, November 13, 2019 (Alex Brandon/Getty)

I spoke further about the impeachment hearings on Thursday with Riem Higazi of Austria’s Radio FM4.

The first side of the hearings is the significant evidence, presented by the top US diplomat in Ukraine and the State Department official overseeing Ukraine, that Donald Trump abused his office and undermined American foreign policy for personal political gain.

The second side is the Republicans, unable to confront that evidence, trying every tactic of diversion and distortion to throw up a smoke screen.

ORIGINAL ENTRY: I joined the BBC, talkRADIO, and international outlets such as Al Jazeera English and Dublin Newstalk on Thursday to discuss the significance of the first day of public impeachment hearings into Donald Trump.

The interviews lay out the mounting evidence of Trump’s compromise of US foreign policy — and American and Ukrainian security — for personal political gain. We consider the Republican attempts to divert from that evidence, and assess whether this could mean Trump’s removal from office before the November 2020 election.

These hearings have already confirmed the extent of the evidence of Donald Trump’s abuses of power. There is a slim chance that he will be convicted on impeachment charges in 2020.

The smoking gun is already there: Donald Trump tried to get a foreign government in interference in next year’s US election.