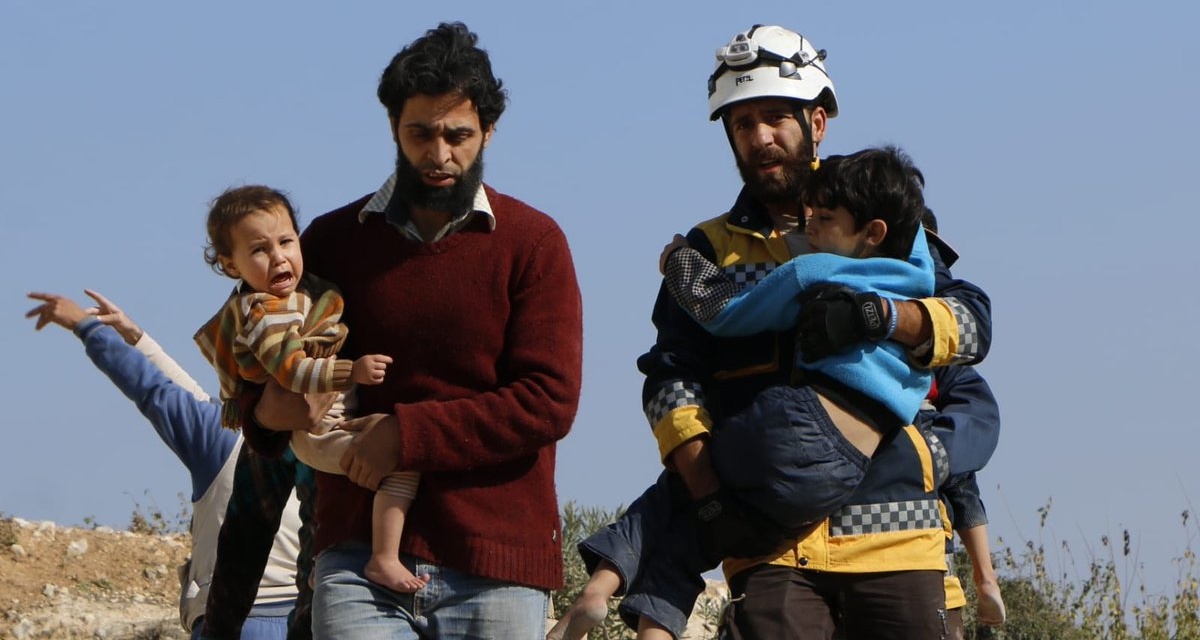 At the start of September, Russian President Vladimir Putin declared a pause in a four-month offensive that killed more than 1,000 civilians, wounded thousands, and displaced more than 400,000 as Russian and regime forces seized most of northern Hama Province and part of southern Idlib.

But on Saturday four civilians were killed and a woman injured by two airstrikes on houses in Jabala village in southern Idlib. On Sunday seven people, including a woman and a White Helmets rescuer, were wounded by shelling and aerial attacks.

Yesterday Russian and regime warplanes attacked in and near the city of Jisr al-Shughour, in northwest Idlib near the Turkish border. The White Helmets said at least three civilians, including two children, were killed and 15 injured. A school and mosque were among the sites struck.

Three rescuers were among the wounded, caught in a “double tap” attack in which warplanes swooped to bomb people responding to an initial strike.

Panic, fear and shelling..
School children and women running for their lives.. This is the situation this morning in #Idlib after the resumption of the regime's air strikes. #Syria pic.twitter.com/tkyHxZooAH

When the attacks thunder down, the SCD find themselves secondary targets. Watch as one White Helmet's camera catches his moments of being caught in a double tap in Jisr al-Shughur in #Idlib. 3 White Helmets and many civilians were injured in this attack. pic.twitter.com/Mh38sCZ1IU

Russian State media is silent about the latest attacks. Turkish outlets also ignore the bombing, preferring to run stories about the capture of relatives of Islamic State leader Abu Bakr al-Baghdadi, killed last week by a US raid, and Ankara’s offensive into Kurdish-held areas in northeast Syria.

Moscow defied Turkish support of Syrian rebels, including Ankara’s troops in northwest Syria, to pursue the spring and summer offensive. But Putin’s pause eased tensions. On October 22, he and Turkish leader Recep Tayyip Erdoğan announced a 10-point plan for joint military oversight of the northeast, fueling speculation of a deal trading Turkish control of mainly-Kurdish territory in return for Russia-regime advance in the northwest.

The site ignores the strikes on civilians, instead declaring raids on the al-Ghab Plain and northeast Latakia Province.

Opposition outlets said the regime, enabled by Russian airpower, is trying yet again to overrun the hilltop town of Kabani in northeast Latakia.

Assad forces have regularly tried but failed to take Kabani, a gateway to Idlib, since late April.

A child survived with his teacher from the clutches of death.. Horrific moments after regime warplanes deliberately bomb a school in Jisr al-Shughour City in #Idlib pic.twitter.com/oxseSVqZc4