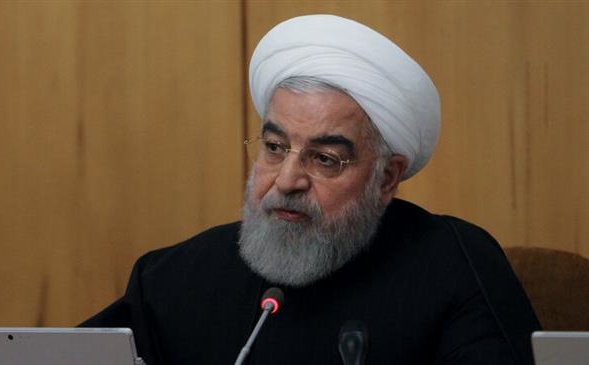 Rouhani said, after a Government meeting in Tehran on Wednesday:

The Iranian nation came victorious out of yet another historic test, and showed that despite the country’s economic problems and existing grievances about the manner of its management, they would never allow the balance to tilt in favor of the enemy.

He claimed that the protests, spurred by the Government announcement last Friday of a 50% rise in the cost of subsidized petrol, had “served to expose both the extent of the enemy’s capability and the level of the nation’s steadfastness, magnanimity, and grandeur”.

At least 106 people have been killed in the regime’s attempt to disperse the protests, Amnesty International reported on Tuesday. Iranian officials say more than 1,000 people have been arrested, citing the burning of scores of banks — targeted amid anger over corruption and regime in-fighting on the issue — and Government buildings.

With up to 95% of the Internet cut off inside Iran, it is difficult to verify whether mass protests are continuing.

Caught by surprise by the scale of the demonstrations, the regime has tried to regain the initiative since Sunday with the Supreme Leader’s intervention, Rouhani’s declaration that “we will not tolerate” disorder, and the Revolutionary Guards’ vow of a “decisive” response.

Led by Khamenei, officials have tried to portray the protests as “rebellious, malicious, disreputable people” backed by foreign governments, relatives of the late Shah, and the “terrorist” Mojahedin-e Khalq Organization.

Rouhani continued the line on Wednesday, saying a “few” demonstrators were “organized, armed and tasked with acting in a calculated manner”: “They took action completely based on a scheme pre-planned by the reactionary regional regimes, the Zionists, and the Americans.”

Security agencies reinforced the message with the announcement that several dual nationals had been arrested in Karaj, near Tehran. Officials claimed they had German and Turkish passports and equipment for sabotage.

Government spokesperson Ali Rabiei declared that a plot by protesters to bomb major gas production installations, in Assalouyeh on the Persian Gulf, had been thwarted.