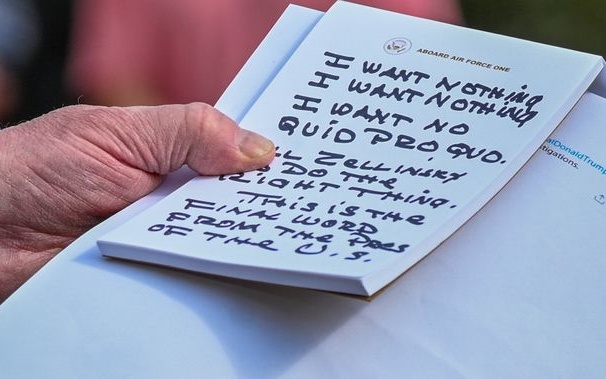 I joined BBC Radio Scotland on Thursday morning to discuss the damage to Donald Trump from Ambassador Gordon Sondland’s testimony in the Trump impeachment inquiry.

We explain the significance of Sondland detailing how Trump and his attorney Rudy Giuliani demanded Ukraine’s statement of investigations to tarnish Presidential candidate Joe Biden and cover up Russia’s involvement in the 2016 US election — linking this to military aid for Kiev and a White House visit for new Ukrainian President Volodymyr Zelenskiy.

We take apart Trump’s new line of defense — “I Want Nothing!” from Ukraine — and look ahead to a vote on impeachment, possibly by the end of this year.

What was significant yesterday was that Gordon Sondland — who was a Trump ally — not only threw Rudy Giuliani under the bus but also then ran that bus over Donald Trump.

“We knew these were orders from the President demanding statements for investigations.”

Note: I mistakenly said it is the Office of Management and Budget’s Mark Sandy testifying on Thursday — Sandy’s appearance is still awaited. Former senior NSC official Fiona Hill and David Holmes, an officer at the US Embassy in Kiev, are testifying today.