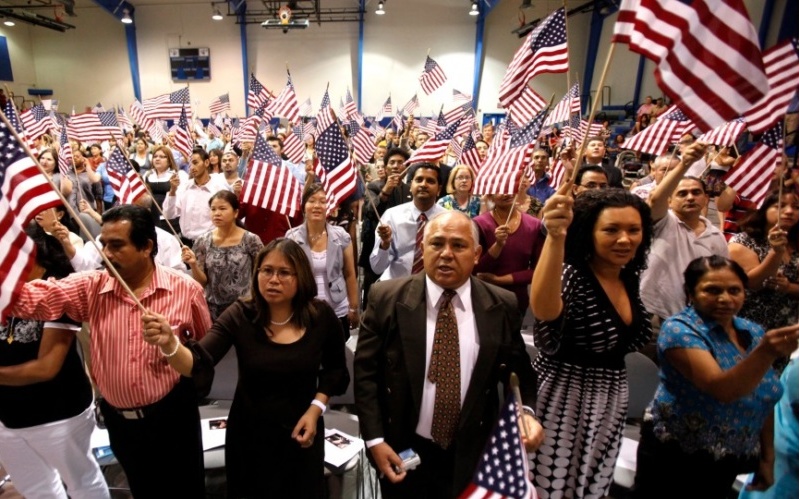 Legal immigrants at a naturalization ceremony to be US citizens — could they be blocked in future by a new Trump Administration rule?

The Trump Administration is denying visas to immigrants whom they deem do not have sufficient health insurance or the ability to pay for medical costs.

Donald Trump issued a proclamation on Friday which will be effective November 3. It orders consular officers to bar immigrants seeking permanent residency in the US — a “green card” — unless they “will be covered by approved health insurance” or have “the financial resources to pay for reasonably foreseeable medical costs”.

One White House official said the order is directed primarily at immigrants seeking to join families in the US. It does not affect refugees or asylum seekers.

Doug Rand, a former Obama Administration official who worked on immigration policy, said the policy will apply to about 500,000 people seeking green cards, most of whom are the parents and spouses of US citizens.

The proclamation claimed that legal immigrants are three times as likely as US citizens to be without health insurance:

The United States government is making the problem worse by admitting thousands of aliens who have not demonstrated any ability to pay for their health care costs. Immigrants who enter this country should not further saddle our health care system, and subsequently American taxpayers, with higher costs.

White House officials cited a Kaiser Family Foundation study that said that, among those who are not elderly, 23% of legal immigrants are uninsured, compared to about 8% of American citizens.

But Elizabeth Jamae, an immigration lawyer in San Francisco, questioned the assertion: “Most people who are receiving green cards already have a job waiting or have a spouse that is employed. When you apply for a green card you already have to meet certain financial requirements.”

And the Kaiser Family Foundation, the source used by the White House to justify its action, noted that the proclamation undercuts those who have health insurance by declaring that subsidized provision under the Affordable Care Act — ObamaCare — is not acceptable.

“It’s classic Catch-22 for low-income immigrants,” said Larry Levitt, executive vice president of the Foundation. “They’re eligible for subsidized health coverage through the ACA, but applying for that subsidized coverage means they can’t legally be in the country.”

In addition to its “zero tolerance” of undocumented immigrants — including detentions in inhumane conditions, indefinite detention of families, and attempts to block asylum seekers — the Administration, led by hardline White House advisor Stephen Miller, is hoping to cut legal immigration by about 25%.

In August, the Administration issued a regulation allowing officials to deny permanent legal status to immigrants who receive support from public services such as Medicaid and food stamp. If it is not blocked by legal action, the rule will go into effect on October 15.

Steve Yale-Loehr of Cornell Law School, saying thousands of immigrants will be denied green cards by the latest proclamation, summarized, “President Trump has failed to build a physical wall along the U.S.-Mexico border to deter illegal immigrants, but he has effectively built an invisible wall to keep out legal immigrants.”

What does foreseeable medical expenses mean? How much money is that? How do you prove that you’re going to get health insurance in the future? It’s silent on all these things. There’s no particular form that has been put out there for people to fill out.