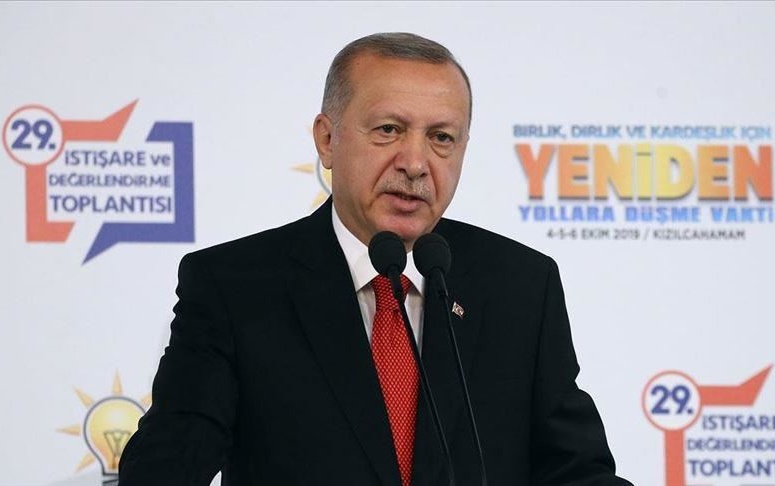 Syria’s Kurdish groups have warned against Turkish military operations in the northeast, as Turkey’s President Recep Tayyip Erdoğan says they could occur “today or tomorrow”.

The Autonomous Administration for Syrian Kurdistan (Rojava) said in a written statement on Saturday:

The components of our people in northern and eastern Syria have contributed to maintaining stability and security in our regions. We have not accepted any attempt to divide Syria or break up its social unity….The ongoing Turkish threats are serious and threaten the security and stability of the region, especially the areas liberated from ISIS [the Islamic State] and where the various components live in harmony.

Earlier in the day, Erdoğan stepped up months of declarations of possible cross-border operations, in a speech at the opening of the annual camp of his Justice and Development Party (AKP): “We gave all warnings to our interlocutors regarding the east of Euphrates and we have acted with sufficient patience. We’ve made our preparations, we’ve completed our operation plans, given the necessary instructions.”

Turkey’s State news agency Anadolu said nine trucks loaded with armored vehicles and one bus with military personnel had been sent to the border district of Akcakale in the southeast of the country.

2
Huge military reinforcements for the #Turkish army are now heading towards the border near the Turkish province of $Orfa near #tell_Abyad pic.twitter.com/6lWffYJBbT

Ankara considers the Syrian Kurdistan Democratic Union Party (PYD) and its YPG militia, the leading faction in Rojava, to be part of the Turkish Kurdish insurgency PKK. But the YPG is the largest element in the US-backed Syrian Democratic Forces, created in October 2015 to push the Islamic State out of the northeast.

SDF spokesman Mustafa Bali said yesterday, “We will not hesitate to turn any unprovoked attack by Turkey into an all-out war on the entire border to defend ourselves and our people.”

Last December, after Donald Trump impulsively ordered withdrawal of US forces from Syria — following a call with Erdoğan — the Turkish President declared a “safe zone” along much of the Turkish-Syrian border and across the Kurdish cantons of Kobani and Cezire.

But the Pentagon pushed back against Trump’s command, in part because of concerns of a Turkish attack on Kurdish groups. About 1,000 US troops remain in Syria, half alongside the SDF and half at the Tanf base in eastern Syria on the Iraq border.

After months of tension and negotiation, Turkey and the US agreed on oversight of a “safe zone”, 480 km (270 miles) extending east across the Euphrates River to Iraq. Joint air and ground patrols began in early September.
However, the two sides did not clarify the depth of the zone — Turkey wants 30 km (19 miles) while the US has proposed 15 km — or the operational command of the patrols.

Throughout the past week, Erdoğan and senior Turkish officials have said that, tiring of US delay, they are ending the co-operation with the Americans. The President declared on Tuesday, “There is no other choice but to act on our own”. Defense Minister Hulusi Akar announced Friday, “We have completed our preparations in case of any possibility”, as Foreign Minister Mevlüt Çavuşoğlu proclaimed, “We must take steps to clear the terrorist organizations from our vicinity and return refugees there.”

Erdoğan has said that up to 2 million of the 3.6 million Syrian refugees in Turkey will be resettled in the zone. Most of the displaced are Arabs, raising the possibility of tension with Kurdish groups who have declared autonomy in their cantons.

The Turkish President maintained on Saturday, “”Our aim is, I underline it, to shower [the area] east of the Euphrates with peace.”

Today, the Turkish President renewed his threats to invade the region despite our commitment to all the terms of “the security mechanism” agreed upon with the United States of America to prevent the justification for any Turkish occupation as happened in Afrin, Jarablus, Azaz and al-Bab.
,
Any new Turkish attack would destabilize the region, serve terror and be a real opportunity for ISIS to reorganize itself and thus take control of large areas of Syria.

SDF spokesman Bali summarized, “Simply, there will be a big gap in the towns that our forces will withdraw from to go to defend the border, and this will give Daesh the opportunity to return.”

In early 2018, Turkish forces and Syrian rebels took over almost all of the Kurdish canton of Afrin in northwest Syria, leaving the Kurdish political and military groups concentrated in Kobani and Cezire.

Rebel commanders said Friday that they will support Turkish operations, blaming the YPG for the the displacement of Arab civilians from the northeast.