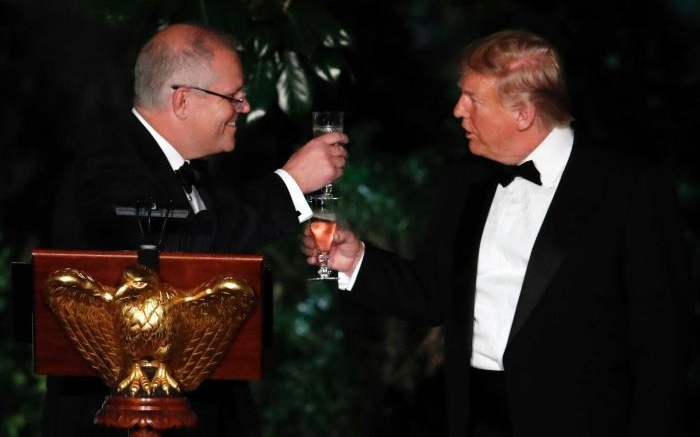 The incident adds to the revelations of Trump’s possible manipulation of US foreign policy to advance his personal interests, including a 10-month campaign by him and his attorney Rudy Giuliani for Ukrainian officials to investigate Democratic rival Joe Biden and to promote a conspiracy theory denying Russian interference in the 2016 US Presidential election.

An official said that Trump’s call to Morrison was made at Barr’s request. He said that the transcript — like that of Trump’s call to Ukraine President Volodymyr Zelenskiy in late July — was restricted to a highly-secured area after Trump officials realized the sensitive nature of the discussion.

Trump sees the Attorney General as an essential part of the effort to discredit the Democrats and the Trump-Russia investigation. He repeatedly urged Zelenskiy to meet Barr as well as Giuliani to discuss Joe Biden.

Barr, who took office in February 2019, is supposed to be a neutral head of the Justice Department. However, he quickly took on the role of Trump protector. He misrepresented the findings of Special Counsel Mueller, detailing evidence of Trump campaign links with Russian officials and of Trump’s obstruction of justice in at least eight cases.

The Attorney General has refused to appear before House committees seeking further information on the Trump-Russia matter. Meanwhile, he has directed the Justice Department to focus on supposed misdeeds by the FBI in its conduct of the investigation.

Justice Department spokeswoman Kupec would not give details of Barr’s discussions in Italy, including whether he spoke about the inquiry into the FBI, being carried out by US Attorney John Durham.

Australia had a role in the origins of the Trump-Russia affair in 2016. Canberra’s officials told the FBI that Russia’s intermediaries approached Trump campaign staff, offering the release of information to damage the campaign of Democratic nominee Hillary Clinton.

Trump campaign foreign policy advisor George Papadopoulos, in a meeting in a London pub, boasted to the Australian Ambassador to the UK Alexander Downer of Moscow’s offer of the anti-Clinton material.

Papadopoulos was in discussions with academic Joseph Mifsud, with links to Russian officials, who said Moscow had “thousands” of Hillary Clinton’s stolen e-mails.

White House spokesman Hogan Gidley tried to implement Trump’s tactics of diverting attention by attacking critics and opponents: “The Democrats clearly don’t want the truth to come out anymore as it might hurt them politically, but this call relates to a DOJ [Justice Department] inquiry publicly announced months ago to uncover exactly what happened.

A spokesman for Prime Minister Morrison said, “The Australian government has always been ready to assist and cooperate with efforts that help shed further light on the matters under investigation. The PM confirmed this readiness once again in conversation with the president.”