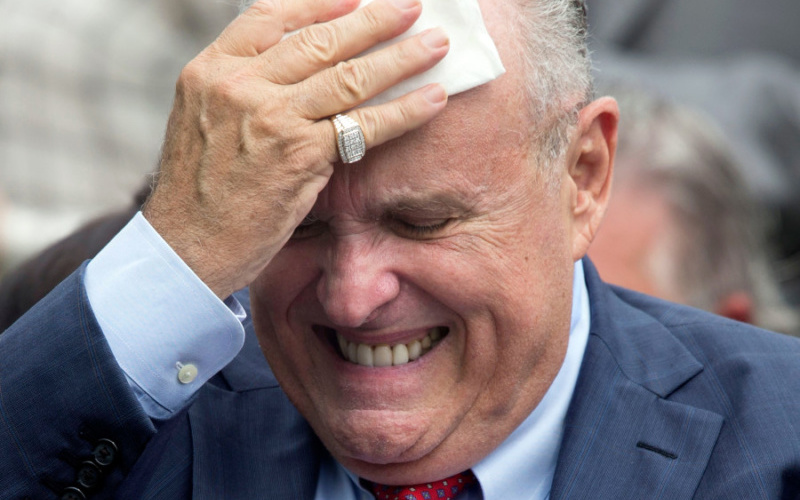 Donald Trump’s attorney Rudy Giuliani is rocked further by criticism — and possible legal action — over the campaign for Ukraine’s investigation of Presidential candidate Joe Biden and the Democratic Party.

And it was confirmed that Giuliani’s legal firm was paid $500,000 by Lev Parnas, who pursued Giuliani’s effort in Ukraine and was indicated last week for campaign finance violations.

Hill, who oversaw NSC policy and operations on Europe and Russia, told House investigators that Bolton confronted the US Ambassador to the EU, Gordon Sondland, on July 10 — 15 days before the Trump phone call with Ukraine President Volodymyr Zelenskiy that triggered a formal complaint by the CIA liaison with the White House on Ukraine, the House investigation, and an impeachment inquiry.

Sondland and US envoy to Ukraine Kurt Volker were arranging meetings between Giuliani and senior Ukrainian officials after Zelenskiy’s inauguration in May.

“I am not part of whatever drug deal Sondland and [Acting White House Chief of Staff Mick] Mulvaney are cooking up,” Bolton instructed Hill to tell White House lawyers, according to two people at Hill’s deposition.

The senior advisor also quoted Bolton in an earlier conversation, “Giuliani’s a hand grenade who’s going to blow everybody up.”

When Hill confronted Sondland over his intervention on behalf of Giuliani, the Ambassador maintained that he was in charge of Ukraine.

Hill asked, “According to whom?”

Hill left the NSC on July 19. She told investigators, according to sources, that she opposed the July 25 call between Trump and Zelensky because she did not understand its purpose. She was not told that Trump would seek an investigation into Biden.

Volker testified earlier this month but the White House and Secretary of State Mike Pompeo had tried to block other former and current personnel from testifying or providing documents.

That effort appears to be collapsing. Former US Ambassador to Ukraine Marie Yovanovitch, who was pushed out in May by the Trump-Giuliani campaign, met the House investigators last Thursday.

Sondland, whose scheduled appearance was cancelled last week by the State Department, will testify this Thursday. He is expected to undermine Trump’s defense by saying that his insistence of “no quid pro quos” in the Trump-Zelenskiy call — defending Trump against the claim that he linked military aid to Ukraine to the investigation of Biden — was made under instruction from Trump.

As prosecutors investigate Giuliani over campaign finance and lobbying issues, Trump’s attorney confirmed on Monday that he had been paid $500,000 by Parnas.

Parnas was arrested last Wednesday with another Giuliani associate, Igor Fruman, at Dulles International Airport. They held one-way tickets to Vienna via Frankfurt. Giuliani was due to fly to the Austrian capital on Thursday.

Giuliani told Reuters that he was hired by Parnas’ Florida-based company Fraud Guarantee around August 2018 to consult on technologies and provide legal advice on regulatory issues.

The payment was first reported last week by The New York Times, which cited Parnas’ account to associates of the transactions.

The unsealed indictment of Parnas and Fruman says an unidentified Russian businessman arranged for two $500,000 wires to be sent from foreign bank accounts to a US account controlled by Fruman in September and October 2018.

The indictment said the money was used in part, by Fruman, Parnas and two other defendants to obtain influence with US politicians and candidates. They included a Congressman who demanded the removal of US Ambassador Yovanovitch.

I know beyond any doubt the source of the money is not any questionable source. The money did not come from foreigners. I can rule that out 100%.