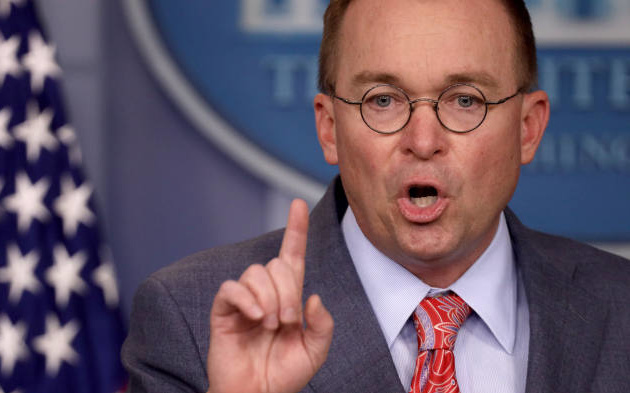 White House Chief of Staff Mick Mulvaney says Donald Trump’s suspension of military aid to Ukraine was linked to demands on Kiev for investigations assisting Trump against the Democratic Party.

In a televised White House briefing on Thursday, Mulvaney said almost $400 million of assistance was withheld in part until Ukraine investigated a conspiracy theory that Kiev, not Russia, hacked Democratic National Committee e-mails during the 2016 US election.

The declaration undermined Trump’s assertion — amid an impeachment inquiry sparked by his 10-month campaign for Ukrainian investigations of Presidential candidate Joe Biden and the Democrats — that there was “no quid pro quo” in his July 25 call with new Ukrainian President Volodymyr Zelenskiy.

The look back to what happened in 2016 certainly was part of the thing that [Trump] was worried about in corruption with that nation. And that is absolutely appropriate….

Did he also mention to me in passing the corruption related to the DNC server? Absolutely. No question about that. That’s why we held up the money.

White House staff were reportedly stunned by the Chief of Staff’s statement. Trump ordered aides to repair the damage, and Mulvaney later walked back his remark:

Once again, the media has decided to misconstrue my comments to advance a biased and political witch hunt against President Trump.

Let me be clear, there was absolutely no quid pro quo between Ukrainian military aid and any investigation into the 2016 election. The president never told me to withhold any money until the Ukrainians did anything related to the server.

“Crazy” Link of Aid and Investigations

In his July 25 conversation with Zelenskiy, Trump said:

The server [that hacked the Democratic National Committee], they say Ukraine has it….I would like to have the Attorney General call you or your people and I would like you to get to the bottom of it….Whatever you can do, it’s very important that you do it if that’s possible.

After US military aid — suspended days earlier by Trump, but with Zelenskiy still unaware — was discussed, Trump pressed for the investigation of Joe Biden and his son Hunter, a board member of Ukraine’s largest private gas company, repeating an unsupported allegation that the elder Biden arranged the dismissal of the Ukrainian Prosecutor General.

A formal complaint by the CIA’s liaison with the White House, citing multiple White House officials, reported their concern about the apparent link between aid and the demand for the investigation. The US chargé d’affaires in Kiev, William Taylor, texted, “It’s crazy to withhold security assistance for help with a political campaign.”

The US envoy to the European Union, Gordon Sondland — a key figure in the campaign by Trump and his attorney Rudy Giuliani for investigations — insisted to Taylor that there was no quid pro quo.

But Sondland, a political appointee rather than a career diplomat, said in testimony to House investigators on Thursday that he gave the assurance at Trump’s direction.

Sondland caused further trouble for Trump by supporting the testimony of current and former high-ranking officials — the National Security Council’s Fiona Hill, US Ambassador to Ukraine Marie Yovanovitch, and the State Department’s George Kent — that Trump had delegated US policy on Ukraine to his Giuliani.

A “senior Justice Department official” knocked back Mulvaney’s assertion that the assistance freeze was linked to the Department’s work: “If the White House was withholding aid in regards to the cooperation of any investigation at the Department of Justice, that is news to us.”

But instead of easing the situation, Mulvaney appeared to double down on confrontation:

I have news for everybody: Get over it. There’s going to be political influence in foreign policy. Elections have consequences.