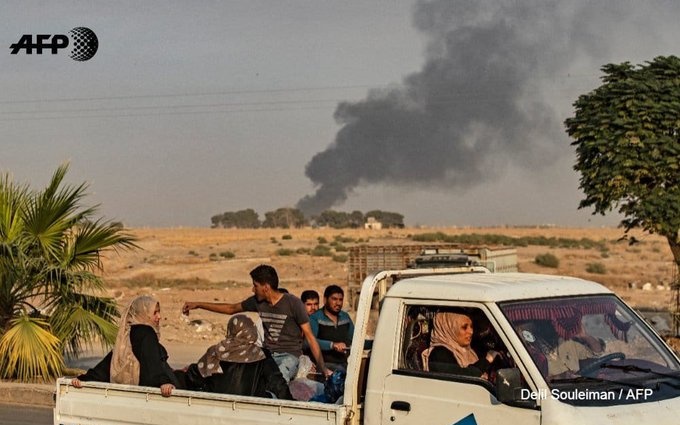 Turkish President Recep Tayyip Erdoğan has unleashed a rhetorical attack on other countries, rejecting any criticism of Ankara’s military operations into northeast Syria.

“Turkey will ignore criticisms about Operation Peace Spring which we launched against terrorist elements while more than 10 foreign actors roam freely in Syria,” Erdoğan said.

Addressing a conference of the ruling Justice and Development Party (AKP), he aimed at Saudi Arabia, “Look in the mirror and answer for what it has done to Yemen.” Egypt’s President Abdel Fatteh El-Sisi was chided for allowing democratically-elected [former President Mohamed] Morsi to die suffering in a courtroom”.

And the Turkish President snapped at the European Union’s objection to the Turkish bombing and shelling and any attempt at “demographic change” in mainly-Kurdish areas: “We will open the gates and send 3.6 million refugees your way.”

The EU warned Ankara, ”The EU will not provide stabilisation or development assistance in areas where the rights of local populations are ignored.”

Erdoğan continued the framing of Kurdish groups as “terrorists” who must be eliminated: “Turkey has neutralized a total of 16,000 terrorists, including 7,500 at home and 8,500 abroad in the past four years.”

He claimed the Turkish offensive had already killed 109 “terrorists”.

On Thursday afternoon, there were three explosions in the Turkish border town of Akcakale, apparently from fire by Kurdish militia. The Governor’s office said two people, including a 9-month-old boy, were killed and 46 injured.

“As a result of mortar and rocket shells hitting Akcakale and Ceylanpinar, 9-month-old Syrian Muhammed Omar and an officer working for Tax Office, 46-year-old Cihan Gunes has been martyred,” the statement said.

Officials earlier told CNN said that several mortar rounds landed in the garden between the governor’s office and the riot police headquarters in Akcakale.

A Syrian rebel spokesman said a brigade of about 1,000 Turkish-backed fighters had taken the town of al-Yabseh, with no Kurdish resistance.

Another spokesman for the Turkish-backed National Syrian Army said three villages, near the towns of Ras al-Ain and Tel Abyad, ahd been taken. He said 13 members of the YPG militia had been killed.

Three days after Donald Trump accepted the cross-border operations, in a phone call with Recep Tayyip Erdoğan, the Turkish President announced the start of the offensive via Twitter:

#OperationPeaceSpring will neutralize terror threats against Turkey and lead to the establishment of a safe zone, facilitating the return of Syrian refugees to their homes.

We will preserve Syria’s territorial integrity and liberate local communities from terrorists.

The Turkish military confirmed it had “launched the land operation into the east of the Euphrates river”, later announcing that it struck 181 “militant targets”.

Journalists reported on the attacks on border towns such as Ras al-Ain and Tel Abyad, with video showing civilians fleeing as smoke rose from their towns and planes flew overhead.

Kurdish activists said at least seven civilians were killed by bombing and shelling.

Mustafa Bali, spokesman for the Kurdish-led Syrian Democratic Forces, said the attacks were causing a “huge panic among people”.

Ankara considers the Syrian Kurdistan Democratic Union Party (PYD) and its YPG militia as “terrorists” linked to the Turkish Kurdish insurgency PKK, which has fought Turkey’s security forces for 35 years. But the YPG are the leading element in the US-supported Syrian Democratic Forces, which have removed ISIS as a military presence in the northeast.

Trump repeated Ankara’s line on Wednesday, reframing the creation of the SDF in October 2015 to fight the Islamic State as the Obama Administration “bringing the PKK…a mortal enemy of Turkey” into Syria.

Gülnur Aybet, Erdoğan’s senior advisor, said, “President Trump and President Erdoğan have reached an understanding over precisely what this operation is….[Trump] knows what the scope…is.”

The White House issued a statement which retreated from Trump’s acceptance on Sunday, “The United States does not endorse this attack and has made it clear to Turkey that this operation is a bad idea.” It assured, “There are no American soldiers in the area.”

NATO Secretary-General Jens Stoltenberg said he understood Turkey’s security interests but called for restraint to “ensure that the gains we have made in the fight against ISIS are not jeopardised.”

The UN Security Council will convene on Thursday, and Stoltenberg will speak with Erdoğan on Friday.

Ankara has said since last December, after Trump told Erdoğan that he would withdraw all US forces from Syria, that it would establish a “safe zone”, along 480 km (270 miles) of the Syrian-Turkish border, and 30 km (19 miles) deep into the Kurdish cantons of Kobani and Cezire.

The Pentagon pushed back Trump’s order, maintaining about 1,000 US troops in northeast and east Syria, half of them alongside the Syrian Democratic Forces.

But Ankara continued to pursue the zone in talks with the Americans, with Erdoğan saying he would move 2 million of the 3.6 million Syrian refugees in Turkey into the area.

Last month, Turkey and the US began joint patrols of the zone but Ankara soon criticized Washington for stalling amid a failure on operational control and on the depth of the area. Erdoğan’s call on Sunday to Trump about the dispute culminated in Trump’s surprise order accepting Turkish cross-border action.

The White House statement on Wednesday repeated Trump’s emphasis on the Islamic State, “Turkey is now responsible for ensuring all ISIS fighters being held captive remain in prison and that ISIS does not reconstitute in any way, shape, or form.”

However, of the 90,000 Islamic State fighters and family members in camps in northeast Syria, about 74,000 are in al-Hol, which is outside Turkey’s declared “safe zone”.

Trump gave a muddled declaration yesterday, “We are taking some of the most dangerous ISIS fighters out…and we’re putting them in different locations where it’s secure.”

US officials said that two ISIS members, part of a British quartet who tortured and beheaded detainees, had been taken into American custody. The men were given the moniker “The Beatles” by the UK press.

In case the Kurds or Turkey lose control, the United States has already taken the 2 ISIS militants tied to beheadings in Syria, known as the Beetles, out of that country and into a secure location controlled by the U.S. They are the worst of the worst!

He praised himself for his supposed wisdom in portraying the situation: “A different take!”