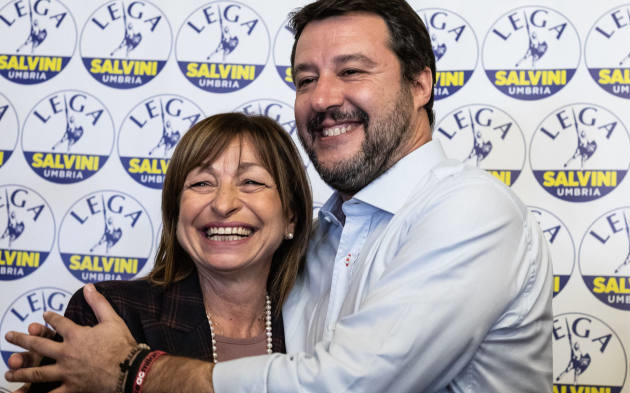 Written with Mattia Zulianello, also of the Populism in Action Project, for the European Politics and Policy site of the London School of Economics.

The Populism in Action Project is based at the University of Birmingham.

The Italian right scored a stunning victory in the regional election in Umbria in central Italy on Sunday, casting doubt on how long Italy’s current government — backed by the left and the Five Star Movement (M5S) — can survive.

Umbria’s new Governor is Donatella Tesei, a League (Lega) Party senator who also enjoyed the backing of Forza Italia and Brothers of Italy. With this support, she took 57.5% of the vote, compared with Vincenzo Bianconi’s 37.5%.

Umbria had been governed by left wingers since the institution of regional administrations about 50 years ago, but the writing for the ruling centre-left Democratic Party (PD) has been on the wall. The League gained an impressive 38.2% of the Umbrian vote in the 2019 European elections, and the PD’s reputation took a hit when the previous governor had to quit due to a scandal. However, what was unexpected was the scale of the PD’s defeat, particularly since it had reached an agreement with the populist M5S that they would both throw their weight behind Bianconi’s candidature for the governorship.

An early sign of the shift was the 9% increase in turnout to 64.4%, compared with that of the regional elections of 2015. It is yet another confirmation that, when people believe they can bring about change, they participate in larger numbers. The right swapped places with the PD/M5S alliance, securing almost exactly the same percentage of votes that its opponents had gained in the previous regional election.

The League, which had become the largest party at the 2018 general election, confirmed its status by gaining roughly the same percentage of votes it secured in the 2019 EU ballot: 37% on Sunday versus 38.2% in the spring. Brothers of Italy, a party many commentators regard as extreme right, also had a very good night: it doubled its support from 2018, with former Prime Minister Silvio Berlusconi’s Forza Italia limping home on 5.5% of the vote — a nightmare for what had once been the dominant component of the right-wing coalition.

If Berlusconi may not have felt like cracking open the prosecco, the right’s opponents had even less reason to celebrate. This was particularly true of the M5S, as it clinched a mere 7.4% of the vote vs. the 27.5% it achieved in 2018. At 22.3%, the PD’s vote share was not dissimilar to what it had gained in the general election last year and the EU elections this year, but the problems for the party are the loss of the governorship and the scale of Lega leader Matteo Salvini’s triumph.

The Right Won: So What Now?

The success of the right is undeniable, but the reasons why this should matter beyond the borders of Umbria may not be immediately apparent, given that only 700,000 people were entitled to vote in this election.

Instead, the composition of the losing coalition is the issue here, insofar as it closely mirrors the one governing the country.

Salvini’s League decided 2 1/2 months ago to walk out of the government it had formed with the M5S, but the party failed to trigger a general election. Prime Minister Giuseppe Conte managed to stay on, supported by the PD and M5S.

Now that these two parties have resoundingly failed to pass their first electoral test of their coalition, Salvini will agitate to get the election that eluded him in the summer claiming that the government does not enjoy the support of Italians. If a defeat in Umbria sets in motion a series of similar defeats for the PD and M5S across Italy, an election may well become inevitable. Specifically, if the right wins the election coming up in January in the much larger Emilia-Romagna region – another former stronghold of the left, but one that has not been plagued by scandals – then the momentum could become unstoppable for a fresh national ballot next spring.

The scale of the M5S’s defeat indicates that its decision to integrate into the political system and abandon its isolationist stategy has largely been a failure. Unlike many of its populist counterparts, M5S has lost its credibility as it has started taking on governing responsibilities. Faced by a rapidly weakening party, the most “League-friendly” M5S deputies and senators may have a strong incentive to jump ship and join the League’s group in Parliament, possibly leading to Conte losing his majority. Beyond this swapping of t-shirts — hardly unusual in Italy — there are also those within the M5S who see an early election as an opportunity to get rid of “the old guard”, starting with their high-profile leader and current Foreign Minister Luigi Di Maio. They would be happy to regroup in opposition, if the prize were a fundamental shake-up of the party.

As for the left, unity is obviously not their forte. The PD recently suffered yet another split when former Prime Minister Matteo Renzi left to create a personal, centrist party. It is impossible to guess for how long Renzi will want to be seen as being on the side of a “coalition of losers” by providing support to Prime Minister Conte, if more defeats are ahead. Renzi may view an early election as the lesser of two evils, to establish his party as the novelty of the contest and with an eye to eroding the PD’s support. Tt was not lost on anyone that Renzi avoided turning up during the last days of the campaign in Umbria, as rumors about the growth of the right were intensifying.

The League, once a regional actor concentrated in the north of the peninsula, is consolidating its status as a nationwide party. Salvini will continue to lead the right for the foreseeable future. Opposing him will be two parties that at present look directionless.

If the right can repeat its Umbrian feat in forthcoming regional elections – a much harder task in Emilia-Romagna – then Sunday’s vote may come to be seen as the beginning of the end for the second Conte premiership – and possibly for the Five Star Movement as we know it.