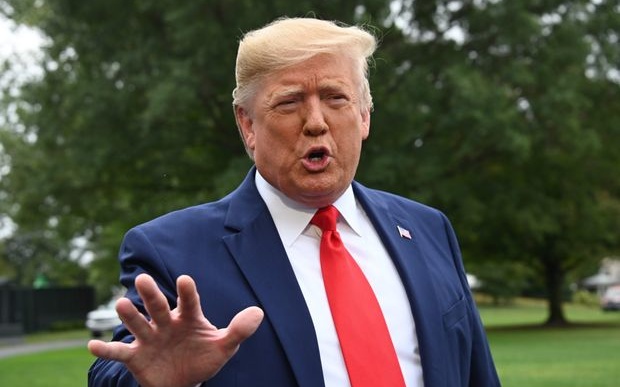 Doubling down on his possible crimes and abuses of power, Donald Trump asks China as well as Ukraine to investigate Democratic rival Joe Biden.

In yet another extraordinary, rambling press appearance, Trump implied a link between his trade war against Beijing and his demand for an investigation: “I have a lot of options on China, but if they don’t do what we want, we have tremendous power.”

In a statement which was supposed to be about health care, Trump was asked about his July 25 phone call with Ukraine President Volodymyr Zelensky, in which Trump raised unsupported conspiracy theories to seek inquiries into Biden and the Democratic Party and to cover up Russia’s intervention in the 2016 US election.

The revelation was the catalyst for an impeachment inquiry. But Trump persisted in his reply: “If they [Ukrainian officials] were honest about it, they’d start a major investigation into the Bidens [Joe Biden and his son Hunter, who was on the board of a Ukrainian gas company]. It’s a very simple answer. They should investigate the Bidens.”

He then extended his challenge, “China should start an investigation into the Bidens, because what happened to China is just about as bad as what happened with Ukraine.”

Trying another allegation void of evidence, Trump asserted, “I’m sure President Xi [Jinping] does not like that kind of scrutiny where billions of dollars is taken out of his country by a guy that just got kicked out of the Navy [Hunter Biden]….You know what they call that? They call it a payoff.”

Last month, Trump delayed the imposition and raising of tariffs by two weeks, from October 1 to October 15, on all $600 billion of Chinese export to the US.

Ukrainian officials said in May that there is no evidence of “legal violations” by the Bidens. The investigation into the gas company Burisma was closed in 2012, two years before Hunter Biden joined its board.

Hunter Biden joined the board of an investment advisory firm, whose partners included Chinese entities, shortly after visiting China in 2013 with his father. Hunter Biden’s attorney George Mesires said his client acquired a 10% equity stake in the firm in October 2017, with the investment worth about $430,000 as of this summer.

The President of the United States encouraging a foreign nation to interfere again to help his campaign by investigating a rival is a fundamental breach of the president’s oath of office. It endangers our elections, it endangers our national security, it ought to be condemned by every member of this body, Democrats and Republicans alike.

Congressional Republicans were almost all silent. Instead, House Minority Kevin McCarthy continued the counter-attack of the Trump camp, calling on House Speaker Nancy Pelosi to suspend the impeachment inquiry until she issues statement on the timing of a vote and on subpoena power for Republicans.

Pelosi responded: “[This request came] shortly after the world witnessed President Trump on national television asking yet another foreign power to interfere in the upcoming 2020 elections. As you know, our Founders were specifically intent on ensuring that foreign entities did not undermine the integrity of our elections.”

Republican Sen. Lindsey Graham, a friend of Trump, said he did not agree with the call on China — “I don’t want to go down that road” — while offering the excuse, “It’s the President pushing back. He feels like everyone is coming after him all the time and he hasn’t done anything wrong.”

Vice President Mike Pence went much farther by joining Trump’s linkage of foreign policy and the 2020 election: “I think the American people have a right to know if the Vice President of the United States or his family profited from his position as vice president in the last administration.”

Pence then repeated the conspiracy theory that Joe Biden obtained the dismissal of Ukraine’s Prosecutor General in 2016 to block an investigation of the Burisma gas company and Hunter Biden.

Ukrainian authorities say the inquiry into Burisma was closed in 2012, two years before Hunter Biden joined the board. Prosecutor General Viktor Shokin was dismissed by Ukraine’s Parliament in March 2016 amid widespread criticism that he was not dealing with corruption.

Meanwhile, Trump continued his attempt to bury the matter by stigmatizing the CIA official who formally complained about the call with Zelenskiy, and by labeling Rep. Schiff a “stone-cold liar”.

He added the unsupported accusation that pharmaceutical companies were behind the impeachment inquiry because of his administration’s effort to lower drug prices: “I wouldn’t be surprised if the hoax didn’t come a little bit from some of the people that we’re taking on.”