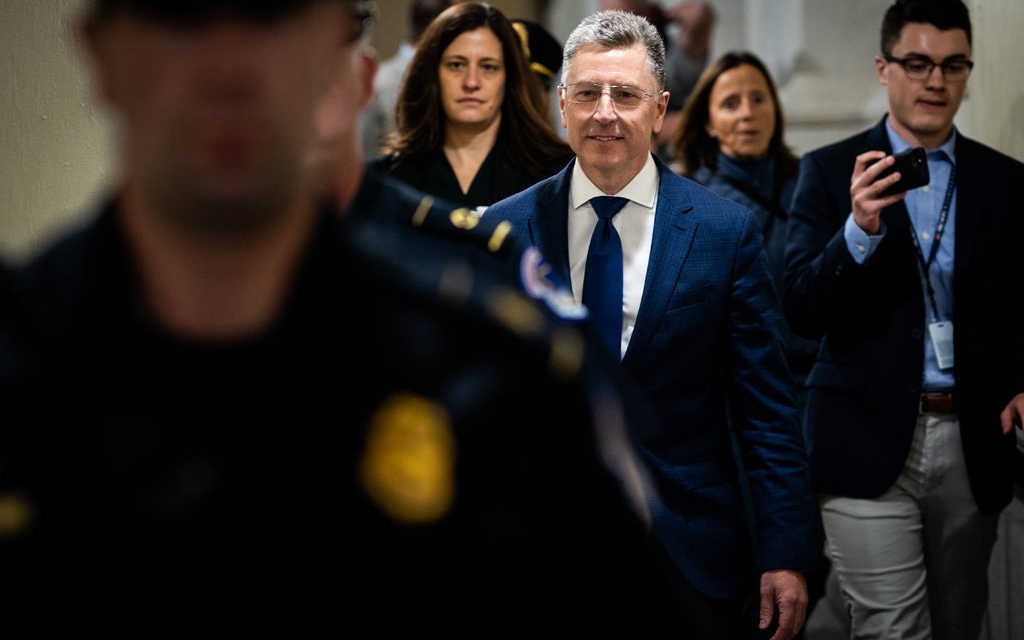 Documents and “three people briefed on the effort” confirm the mission by Kurt Volker, the State Department’s special envoy to Ukraine, and Gordon Sondland, the US ambassador to the European Union.

The two men arranged meetings between Ukrainian officials and Rudy Giuliani, Trump’s attorney who has pursued a 10-month campaign for an investigation of Biden and of other conspiracies targeting the Democratic Party and covering up Russia’s intervention in the 2016 election.

Had breakfast with Rudy this morning — teeing up meeting with [Andriy] Yermak [a senior aide to Ukraine President Volodymyr Zelenskiy] Monday….Most impt is for Zelensky to say that he will help investigation.

Two days later, the US charges d’affaires in Ukraine, William Taylor, passed on a message from Ukrainian Finance Minister Sasha Danyliuk that “President Zelensky is sensitive about Ukraine being taken seriously, not merely as an instrument in Washington domestic, re-election politics”.

But Volker and Sondland continued to work with Giuliani for Trump’s call to Zelenskiy on July 25 seeking the inquiries. Then they drafted a statement by for the Ukrainian President committing Kyiv to the investigation.

Zelenskiy finally resisted the pressure and never released the document.

Volker, who resigned last week, told House Democratic investigators in a closed-door hearing on Thursday about the effort, according to “a person familiar with his testimony”.

Getting A Statement for An Investigation

Released late Thursday by House Democrats, the series of texts show Volker and Sondland appeasing Trump and Giuliani to preserve ties between the US and Ukraine, including the provision of military aid suspended by Trump days before his July 25 call to Zelenskiy.

In early August, Volker and Sondland arranged the meeting between Giuliani and Yermak. Days later, the three men discussed language for the proposed Zelenskiy statement.

On August 13, Volker sent Sondland proposed language, revising a Ukrainian draft, for a renewed investigation of Burisma, where Joe Biden’s son Hunter was a board member. There would also be an enquiry into the conspiracy theory that Ukraine, rather than Russia, was the site of the server hacking the Democratic National Committee in 2016.

The Ukrainian draft did not mention Burisma and the 2016 elections, whereas the US revision was forthright.

We intend to initiate and complete a transparent and unbiased investigation of all available facts and episodes, including those involving Burisma and the 2016 US elections, which in turn will prevent the recurrence of this problem in the future.

There is no evidence for the conspiracy theory that Joe Biden obtained the dismissal of Ukraine’s Prosecutor General to protect Hunter Biden. Ukraine authorities had closed their inquiry into Burisma in 2012, two years before the younger Biden joined the board.

Nor is there any support for the allegation of a Ukraine server hacking e-mails during the 2016 election, or for the claim that Democrats conspired with Ukraine officials against Trump campaign manager Paul Manafort, now serving a 7 1/2-year sentence on tax and fraud charges.

Volker told the House investigators othat he had warned Giuliani against trusting information from Ukrainian political figures about the Bidens, cautioining that sources were unreliable.

Other texts indicate that the Ukrainian statement was required for a Zelenskiy visit to the White House and for the resumption of military aid, after almost $400 million was suspended by Trump in late July.

Hours before the phone call between Trump and Zelenskiy, Volker texted Yermak that he had “Heard from White House” that “we will nail down date” for the visit, “assuming President Z convinces trump he will investigate” the Trump-Giuliani claims.

On August 9, Sondland — in contrast to career diplomat Volker, a political appointee who donated $1 million through his companies to Trump’s inaugural committee — wrote the envoy, “I think POTUS [Trump] really wants the deliverable,” suggesting a Zelenskiy news conference announcing the investigation.

Sondland continued, “To avoid misunderstandings, might be helpful to ask Andrey [Yermak] for a draft statement (embargoed) so that we can see exactly what they propose to cover.”

The next day, Yermak wrote that the Government was willing “to make this declaration and mention all these things” if there “guarantees for future visit”: “Once we have a date, will call for a press briefing, announcing upcoming visit and outlining vision for the reboot of US-UKRAINE relationship, including among other things Burisma and election meddling in investigations.”

But Yermak then said that the language was not acceptable to Zelenskiy for a statement. Volker agreed, and the idea was dropped, according to the envoy’s testimony on Thursday.

A Link to Military Aid

Meanwhile, the Ukrainian Government learned of Trump’s order to suspend US military aid. Diplomats now had to cope with the implication that Zelenskiy’s statement was required for a resumption.

After Trump cancelled a trip to Poland where he would meet Zelenskiy, US charges d’affaires William Taylor texted Sondland: “Are we now saying that security assistance and WH meeting are conditioned on investigations?”

Sondland carried on the exchange by phone.

Taylor texted on September 9 about the “nightmare scenario”: “As I said on the phone, I think it’s crazy to withhold security assistance for help with a political campaign.”

Sondland tried to protect Trump from the fallout, with lines that would be used by Republicans after the revelation of the Trump-Zelenskiy call.

The President has been crystal clear no quid pro quo’s of any kind. The President is trying to evaluate whether Ukraine is truly going to adopt the transparency and reforms that President Zelenskiy promised during his campaign.

I suggest we stop the back and forth by text.