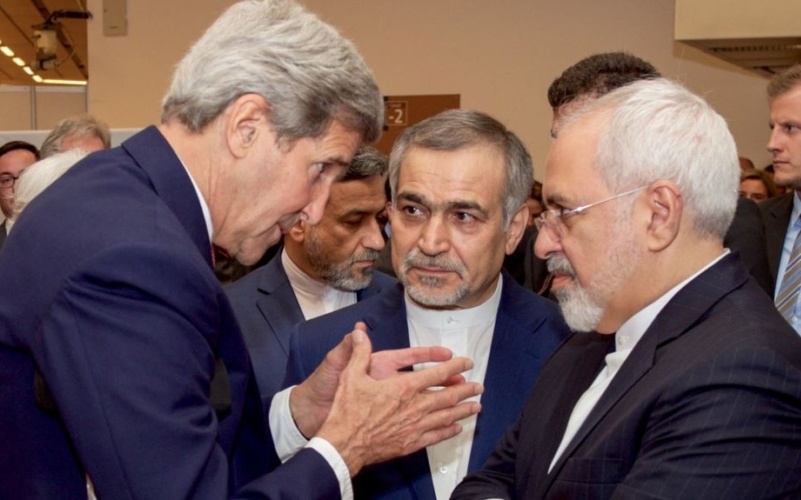 Hossein Fereydoun, the brother of Iran’s President Rouhani, looks on as US Secretary of State John Kerry and Iranian Foreign Minister discuss the 2015 nuclear agreement (File)

The brother of Iran’s President Hassan Rouhani has been sentenced to five years in prison for “receiving bribes”.

Hossein Fereydoun must also pay a fine and return 310 billion rials, about $7.4 million at the Government rate of exchange.

A judiciary spokesman said the final verdict of the Court of Appeal reduced the original 7-year sentence.

Hardliners accused Fereydoun, who was a senior advisor to Rouhani, of offering assistance to those seeking high positions in Iranian banks and other financial and economic institutions, in return for bribes.

Fereydoun was a senior advisor in the negotiations leading to the 2015 nuclear agreement between Iran and the 5+1 Powers (US, UK, France, Germany, China, and Russia).

But he was soon targeted by opponents within the regime of Rouhani’s “centrist” government, amid accusations of corruption through Iran’s financial system and an order by the Supreme Leader to crack down. He was arrested in June 2018 and freed on a bail of almost $12 million.

Mehdi Jahangiri, the brother of 1st Vice President Es’haq Jahangiri and the head of the Tehran Chamber of Commerce, is also free on bail on financial charges.

Mehdi Jahangiri is the founder of the private Gardeshgari Bank and of the Tourism Financial Group with companies in banking, tourism, construction, oil and gas, petrochemicals, and mining.

In May, Mohammad Hadi Razavi, the son-in-law of Labor Minister Mohammad Shariatmadari, has been charged with embezzlement and “disruption of the economy” after allegedly failing to repay 2.11 trillion rials (about $51 million) in loans.