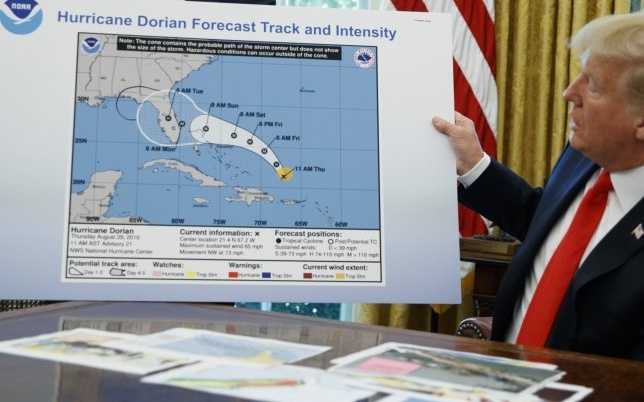 Donald Trump displays a map of Hurricane Dorian, which he has altered with a Sharpie to include Alabama, September 4, 2019 (Evan Vucci/AP)

Experts at the National Oceanic and Atmospheric Administration are told not to contradict Donald Trump over his repeated falsehood that Hurricane Dorian was threatening Alabama.

On September 1, hours after Trump asserted with no evidence that Alabama “would most likely be hit (much) harder than anticipated” by the hurricane, staff were instructed by a top NOAA official to “only stick with official National Hurricane Center forecasts if questions arise from some national level social media posts which hit the news this afternoon”.

The note followed a statement by the National Weather Service office in Birmingham, Alabama — minutes after Trump’s tweet, but without referring to it — that Alabama would “NOT see any impacts from the hurricane”. The statement was issue after phone calls from concerned residents who had seen Trump’s message.

On September 4, after Trump altered a hurricane map with a half-circle drawn in black Sharpie to include Alabama, the NOAA sent a similar warning to scientists and meteorologists not to speak out.

And late Friday, as Dorian made landfall in North Carolina — hundreds of miles from Alabama — NOAA officials issued a statement supporting Trump’s claims on Alabama and criticizing the agency’s Birmingham staff for their accurate reassurance on September 1.

This is the first time I’ve felt pressure from above to not say what truly is the forecast. It’s hard for me to wrap my head around.

One of the things we train on is to dispel inaccurate rumors….Ultimately what the Alabama office did is provide a forecast with their tweet, that is what they get paid to do.

Jane Lubchenco, who served as NOAA administrator under President Barack Obama, assessed, “This looks like classic politically motivated obfuscation to justify inaccurate statements made by the boss. It is truly sad to see political appointees undermining the superb, lifesaving work of NOAA’s talented and dedicated career servant.”

Trump’s obsession with vindication has obscured the more important story about Hurricane Dorian: more than 40 people have been killed in the Bahamas and hundreds are missing, with many feared dead. About 70,000 residents are homeless.

A National Weather Service spokesperson maintained on Saturday, “NWS leadership sent this guidance to field staff so they (and the entire agency) could maintain operational focus on Dorian and other severe weather hazards without distraction.”

A “NOAA official familiar with the matter” insisted that Friday’s statement rebuking the Birmingham meteorologists had “no political motivation”. He said the statement was considered for “a day or two”, with the involvement of acting NOAA administrator Neil Jacobs and the NOAA director of public affairs Julie Kay Roberts, who worked on the Trump campaign in 2016.

Commerce Department officials approved the release of the statement.

The NOAA official said the statement rebuked the tweet from the Birmingham’s office because one NOAA hurricane forecast had a 5% to 20% chance of winds of tropical storm force in a small part of Alabama.

But Keith Seitter, executive director of the American Meteorological Society, said in a statement: “The criticism of the Birmingham forecast office is unwarranted; rather they should have been commended for their quick action based on science in clearly communicating the lack of threat to the citizens of Alabama.”

David Titley, the chief operating officer of NOAA during the Obama Administration, tweeted:

Perhaps the darkest day ever for @noaa leadership. Don’t know how they will ever look their workforce in the eye again. Moral cowardice.

And Dan Sobien, president of the National Weather Service’s labor union, wrote: “I have never been so embarrassed by NOAA. What they did is just disgusting. Let me assure you the hard working employees of the NWS had nothing to do with the utterly disgusting and disingenuous tweet sent out by NOAA management [criticizing Birmingham].”

Meanwhile, Trump — or staff writing in his name — is continuing his Twitter campaign, a week after his initial false declaration: