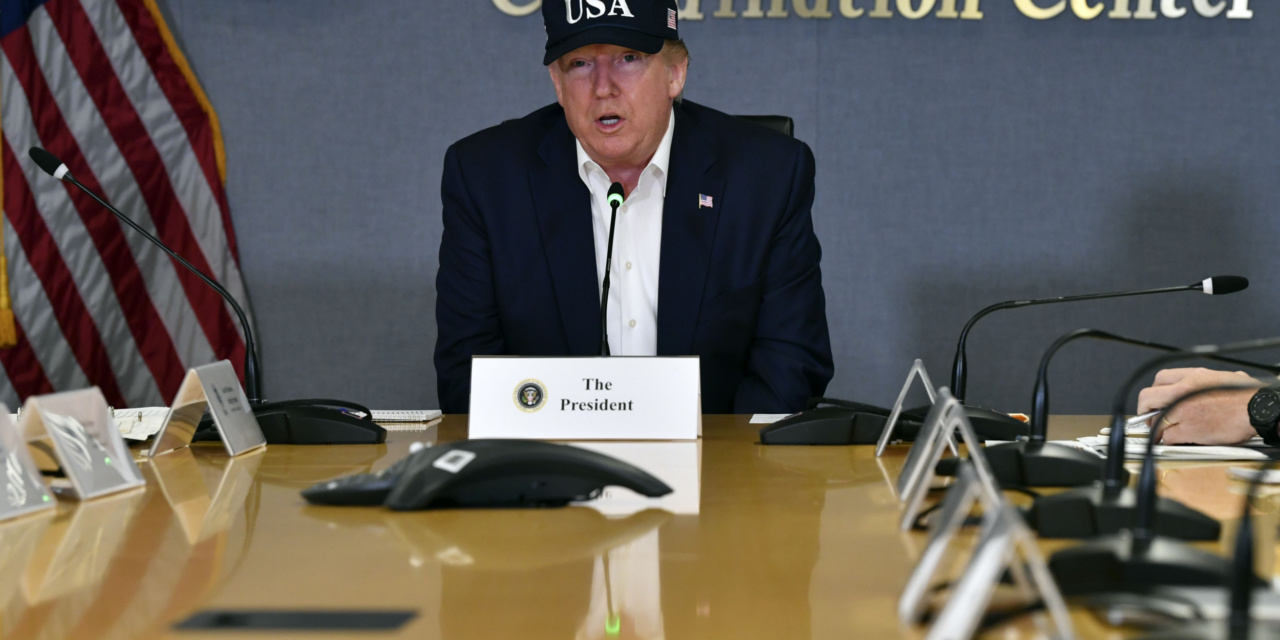 Donald Trump speaks at a briefing of the Federal Emergency Management Agency, September 2, 2019

As Category 5 Hurricane Dorian hits the Bahamas and heads for the continental US, Donald Trump pouts about media coverage of his gaffe that the state of Alabama is in danger.

Dorian, with the second-highest winds of any Atlantic storm on record — more than 180 miles per hour — is still hanging over the Bahama with surging seawater in flooded neighborhoods and destroyed homes. At least five people have been killed, but reports from the island of Abaco spoke of multiple bodies being removed.

The hurricane has been downgraded to a Category 4, but forecasters still that it may inflict severe damage from Florida to southeastern Virginia and possibly beyond.

Trying to present Trump as Presidential and in control, his staff put out a series of tweets and retweets on his timeline through Monday. But Trump intervened in the evening to launch a complaint against the media, for reporting his erroneous declarations about the hurricane threatening Alabama, inland from the Atlantic coast.

In addition to Florida – South Carolina, North Carolina, Georgia, and Alabama, will most likely be hit (much) harder than anticipated. Looking like one of the largest hurricanes ever. Already category 5. BE CAREFUL! GOD BLESS EVERYONE!

Local meteorologists immediately responded to Trump that Alabama, which is on the Gulf of Mexico rather than the Atlantic, “will not be impacted by Dorian in any way”. The National Weather Service’s branch in Birmingham, Alabama, assured, “Alabama will NOT see any impacts from #Dorian. We repeat, no impacts from Hurricane #Dorian will be felt across Alabama. The system will remain too far east.”

But Trump repeated his claim to reporters and at a briefing of the Federal Emergency Management Agency: [Dorian] may get a little piece of a great place: It’s called Alabama.”

Trump tapped out a tweet on his smartphone, misspelling Karl’s name and tagging the wrong Twitter user. He deleted it and reposted a message with the correct spelling.

….when in fact, under certain original scenarios, it was in fact correct that Alabama could have received some “hurt.” Always good to be prepared! But the Fake News is only interested in demeaning and belittling. Didn’t play my whole sentence or statement. Bad people!

Four hours later, Trump — or, more likely, a staff member — closed the day with a message from the National Hurricane Center: “Life-threatening storm surge and dangerous hurricane-force winds are expected along portions of the Florida east coast and the coasts of Georgia and South Carolina….The risk of life-threatening storm surge and and hurricane-force winds continues to increase along the coast of North Carolina.”

There was no mention of Alabama.