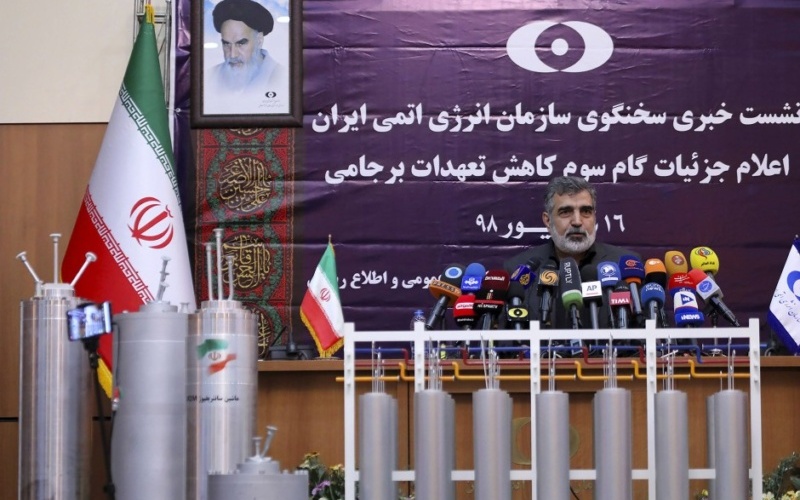 The head of the International Atomic Energy Agency is in Tehran, a day after Iran further suspended its commitments under the 2015 nuclear deal with the remaining 5+1 Powers (UK, France, Germany, China, and Russia).

Acting IAEA chief Cornel Feruta is holding talks as “part of ongoing interactions between the IAEA and Iran”, an agency spokesman said Friday.

The announcement came as President Hassan Rouhani said the “third step” of Iran’s suspended commitments — pursued after failure to establish a vital economic link with Europe to bypass US sanctions — would be taken.

Yesterday the spokesman of the Atomic Energy Organization, told a news conference in Tehran that 20 IR-4 and 20 IR-6 centrifuges have resumed uranium enrichment: “We have started lifting limitations on our Research and Development imposed by the deal….It will include development of more rapid and advanced centrifuges.”

Under the 2015 agreement, Iran put all IR-2m centrifuges in storage for 19 years, with monitoring by the IAEA, and halted development of the IR-4 and IR-6 versions.

The IAEA said Saturday, “[Our] inspectors are on the ground in Iran and they will report any relevant activities to IAEA headquarters.”

The IAEA’s 35-country Board of Governors holds its quarterly meeting in Vienna, Austria on Monday.

US National Security Advisor John Bolton tried to maintain the Trump Administration’s “maximum pressure” on Iran through a Twitter comment on Feruta’s visit to Tehran:

IAEA Acting Director General going to Iran just as IAEA informs its Board that #Iran may be concealing nuclear material and/or activities. We join with other @iaeaorg Board member states eager to get a full report as soon as possible.

The Administration withdrew from the nuclear deal in May 2018 and imposed comprehensive sanctions from November.

In February, the European Union launched a mechanism, INSTEX, to bypass the US sanctions with non-dollar trade in Iranian oil and other commodities and goods. But Tehran’s leadership refused the arrangement because of “humiliating conditions”: the EU’s concern over missiles, Iran’s activities in the Middle East, and alleged involvement in bomb and assassination plots in Europe.

EU Commission spokeswoman Maja Kocijancic told a media briefing on Friday, “Our commitment to the nuclear deal depends on full compliance by Iran.”