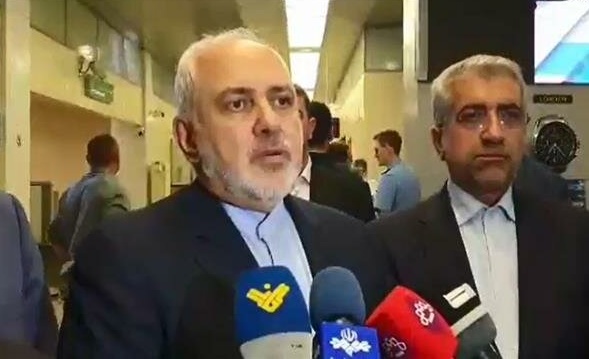 Foreign Minister Mohammad Javad Zarif has said that Iran will not further suspend its commitments under the 2015 nuclear deal, if Europe guarantees the link needed for Tehran’s troubled economy.

Zarif told reporters in Tehran on Sunday, that Iran is in the “final stages of decision-making” about a third step to suspend undertakings under the Joint Comprehensive Plan of Action, agreed with France, Germany, the UK, China, and Russia.

“Iran’s negotiations with the Europeans will continue….If the Europeans fail to carry out necessary measures by Thursday, we will write a letter to the Europeans… announcing the implementation of the third step,” the Foreign Minister said.

Zarif did not specify which provision will be broken, but officials — including President Hassan Rouhani — have indicated that Iran will return to its pre-2015 enrichment of 20% uranium, which potentially can be further enriched to 90% grade for use in a military nuclear program.

Complaining that Europe has not established a proper mechanism for bypassing comprehensive US sanctions, Iran has already broken the deal’s limit on stocks of 3.67% uranium, raised enrichment to 4.5%, and resumed construction of the Arak heavy-reactor, halted under the agreement pending a redesign to prevent by-product of plutonium, which can be used for nuclear warheads.

French President Emmanuel Macron, pursuing mediation between the Trump Administration and Iran, has offered a $15 billion line of credit to Tehran. An Iranian official said Tehran will consider reversing its suspension of commitments under the nuclear deal if the line is established — but went no further over new discussions on missiles and Iran’s military and political activities in the Middle East.

The Trump Administration withdrew from the deal in May 2018 and imposed comprehensive sanctions from November. Iran’s official oil exports have fallen to between 100,000 and 400,00 barrels per day, according to shipping and oil industry sources, compared with 2.5 million bpd in April 2018.

Zarif is in Moscow today for discussions with Russian counterpart Sergey Lavrov and other officials.