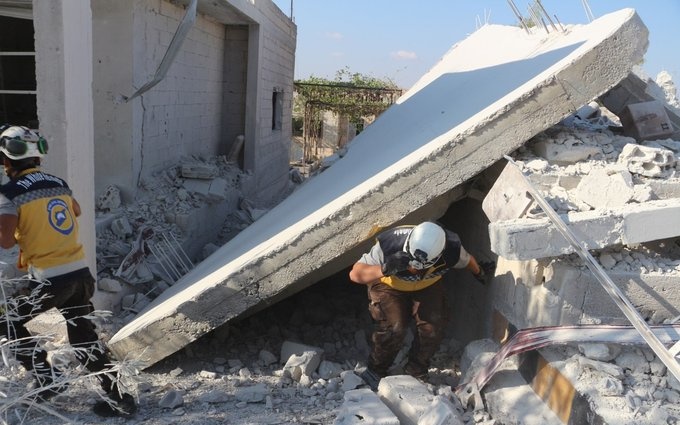 The Assad regime has confirmed its breaking of a Russian “ceasefire” in opposition-held Idlib Province in northwest Syria, with airstrikes killing a woman and damaging a civil defense center on Thursday.

The White Helmets civil defense said “many others” were injured in the attacks on the last major opposition area in the country.

Shortly after the resumption of its raids, regime warplanes targeted the Civil Defense Center in #Sfohen Town in #Idlib countryside, and put it out of service. The ambulance was destroyed, as well as extensive damage to the building. No White Helmets were injured in the attack. pic.twitter.com/iktcFgSzRG

The pro-Assad blog Al Masdar acknowledged “several strikes”, covering the assault on civilian sites with the pretext that there were in “a number of areas controlled by the jihadists of Hay’at Tahrir Al-Sham and the Turkestan Islamic Party”.

Almost two weeks ago, Russian President Vladimir Putin declared a pause in the 4 1/2-month Russian-regime offensive that has taken part of northwest Syria while killing more than 1,000 civilians, injuring thousands, and displacing more than 400,000.

But pro-Assad forces continued shelling and on Tuesday airstrikes resumed across southern Idlib and on neighboring northeast Latakia Province.

The Assad regime also declared a ceasefire at the start of August, but resumed the offensive after four days. Intense Russian airstrikes broke anti-Assad resistance, and the pro-Assad forces regained almost all of northern Hama. In southern Idlib, they reached the M5 highway between Aleppo and Homs, capturing the town of Khan Sheikhoun.

Turkish-supported rebels said on Wednesday that Russian-backed regime forces are again massing for an attempt to take more territory.