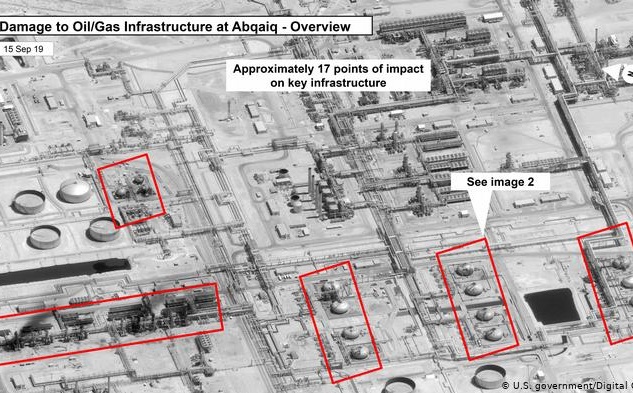 The US Government has stepped up its claim of Iran’s responsibility for Saturday’s attack on two Saudi oil facilities, saying the drones and missiles were launched from Iranian territory.

The officials told media outlets such as Reuters and CNN that the launches were from bases in southwest Iran, near the Iraqi border.

Yemen’s Houthi insurgency, which is battling a Saudi-led coalition, claimed responsibility for the attacks, which more than halved Saudi oil production and led to a 15% in the global price.

But US officials said soon after the strikes that they did not came from Yemen.They questioned if the Houthis had the advanced weaponry that could reach the Saudi complexes, 500 miles from the Yemeni border. The American sources initially pointed to Iraq as the launch site, but by Monday Secretary of State Mike Pompeo was telling the Saudis that American intelligence pointed neither to Iraq and Yemen — a clear implication that the Iranians had fired from inside the Islamic Republic.

Over the weekend, the Americans released satellite image of 17 “impact points” at the two Saudi facilities. They claimed the positions pointed to an attack from the direction of Iran or Iraq, but analysts said the photographs were not clear-cut.

The US officials speaking to Reuters on Tuesday did not provide the evidence that pointed to Iranian territory. However, two “Pentagon sources” told a National Public Radio journalist that US satellites picked up Iran readying drones and missiles at launch sites inside the country before the attack. And another spoke to The New York Times of “unusual activity” at military bases in southwest Iran, consistent with preparations for strikes.

One official claimed that Saudi Arabia’s collection of materials, assisted by US agencies, would yield “compelling forensic evidence…that will point to where this attack came from.” Another claimed the Saudis had already recovered undamaged circuit boards, making it possible to trace the point of origin.

Vice President Mike Pence said, “We’re evaluating all the evidence. We’re consulting with our allies. And the President will determine the best course of action in the days ahead.”

Meeting Bahrain’s Crown Prince, Defense Secretary Mark Esper was firmer in allegations against Tehran: “As you can see from recent events, Iran continues to violate international norms and instead has chosen to promote instability and danger throughout the region.”

Fearing a wider conflict, Saudi officials have been cautious in pointing to Iranian responsibility, let alone a strike from inside Iran.

On Wednesday, State outlet Al Arabiya headlined, “Saudi Defense Ministry to Display Iranian Weapons Used in Oil Attacks”, with a presentation this evening. However, the brief article avoids any mention of the source of the strikes.

Interviewed by the BBC on Tuesday, the Saudi Ambassador to the UK, Prince Khalid Bin Bandar Al-Saud, said, “At the moment we’re investigating the issue. We’re working with our partners in the United States, the UN, the UK, and anyone else who wants to get involved.”

He eventually turned to Tehran, “Almost certainly this is Iranian-backed.”

Secretary of State Pompeo is expected in Jeddah on Wednesday.

Other countries have also been careful in their statements. UK Prime Minister Boris Johnson expressed support in a call to Saudi Crown Prince Mohammed bin Salman on Tuesday, but the British statement made no reference to Iranian responsibility. French Foreign Minister Jean-Yves Le Drian said he was unsure if any State had evidence to say whether drones “came from one place or another”.

US is in denial if it thinks that Yemeni victims of 4.5 yrs of the worst war crimes wouldn’t do all to strike back.

But blaming Iran won’t change that.

He added that the US “is terribly upset when the victims react the only way they can — against the aggressor’s OIL refineries”.

President Hassan Rouhani took a similar line in a video statement: “While exerting psychological and economic pressure on the Iranian people, [the Americans] want to impose maximum…pressure on Iran through slander. Meanwhile, no one believes these accusations.

Defense Minister Amir Hatami insisted on Houthi capability, “In military terms, the Yemenis had carried out a similar operation around two years ago, and had attacked an airport in the United Arab Emirates and fired a missile with a range of 1,200 km (about 745 miles).”

But Mohamad Imani, a military strategist for the Revolutionary Guards, appeared to boast about an Iranian operation. “Iran has not used all its winning cards yet in the oil war with the US and Saudi Arabia,” he wrote on his Telegram channel.