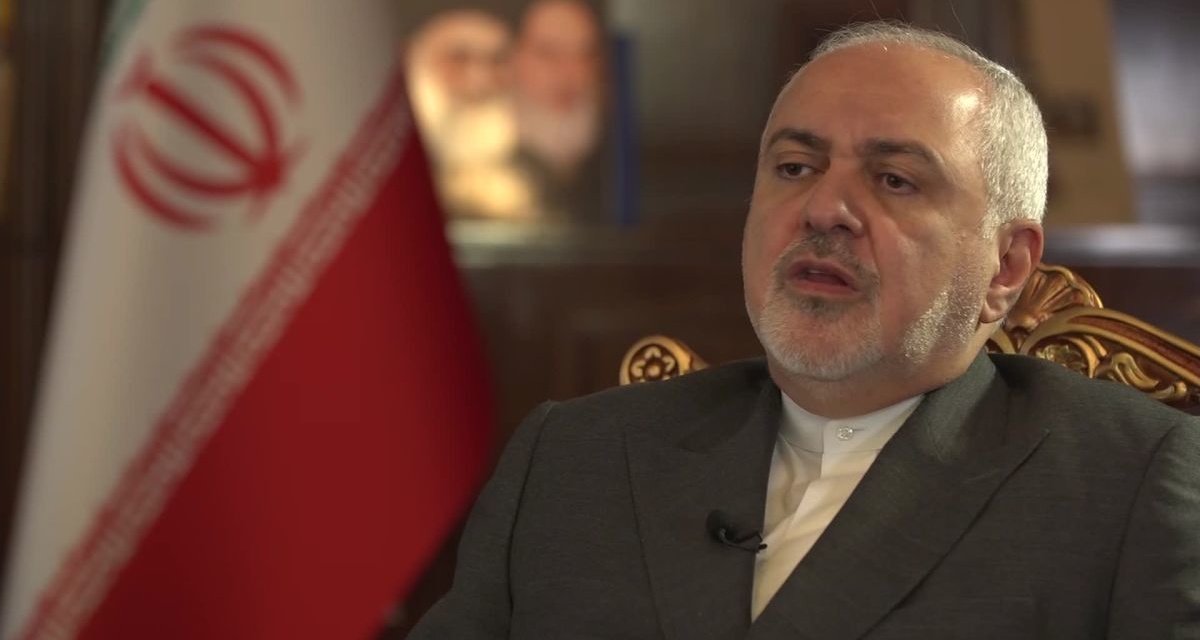 Iran Foreign Minister has said there will be “all-out war” if the US or Saudi Arabia attacks Tehran.

In an interview with CNN, Zarif tried to focus on Saudi involvement in the Yemeni civil war, which has killed thousands of civlians and threatened millions with famine.

The Foreign Minister used the issue to insist that Yemen’s Houthi insurgency carried out last Saturday’s drone and missile strikes on two Saudi oil complexes, which provide more than half of daily output.

The US says the attacks were launched from western Iran, near the Iraqi border. Saudi Arabia has been more cautious, but on Wednesday displayed drone and missile fragments which it says indicate Iran’s backing of the strikes.

EA on Monocle 24 and Radio Islam: Not Quite “War” — Saudi and US Consider Response to Iran After Weekend Attacks
Iran Daily, September 19: Saudis Blame Tehran for Attack on Oil Complexes as Pompeo Says “Act of War”

Asked about the Islamic Republic’s response to US or Saudi strikes inside Iran, the Foreign Minister said:

On @CNN, I emphasized that here's no such thing as a "limited strike". Iran does NOT want war, but we will NOT hesitate to defend ourselves.

Also, Yemenis, under brutal attack for yrs, have powerful motivation to build what it takes to defend themselves.https://t.co/qKYfeFgJAv

Talks with Saudi, But Not US Unless Sanctions Lifted

The Foreign Minister jabbed at Riyadh, “I think it is important for Saudi government to understand what they are trying to achieve. Do they want to fight Iran until the last American soldier? Is that their aim?”

Zarif said Iran is willing to talk with Saudi Arabia and the UAE. But, reiterating the Supreme Leader’s line, he said there can be no discussions with the US without the Trump Administration’s complete withdrawal of American sanctions on Tehran.

[The 2015 nuclear deal] is an agreement that we reached with the United States. Why should we renegotiate? Why should we start something else which may again be invalid in a year and a half?…

If they lift the sanctions that they re-imposed illegally then that’s a different situation. Then we would consider [negotiations].

Zarif put out the Iranian regime’s defiance: “They’ve done whatever they could and they haven’t been able to bring us to our knees.”

The US Government finally issued visas on Thursday for Zarif and President Hassan Rouhani to attend the UN General Assembly in New York next week.

US officials said the Pentagon will present a broad range of military options in a White House meeting on Friday.

After his “Locked and Loaded” tweet on Sunday, Donald Trump has retreated from a military response to the attack on the Saudi facilities. Secretary of State Mike Pompeo has proclaimed an “act of war” by Iran; however, during a visit to Saudi Arabia, he emphasized building an international coalition rather than preparing military operations.

The “US officials familiar with the discussions” said the Pentagon will give Trump a list of potential airstrike targets inside Iran. But the US military will also cite its concern that any operations could lead to an escalation threatening more than 70,000 American personnel deployed from Egypt to Pakistan.

Trump has indicated that he favors the tightening of sanctions on Iran, rather than military operations.

In late June, after Iran’s Revolutionary Guards downed an American drone, Trump approved US airstrikes inside the Islamic Republic. But he reversed the order within an hour as American warplanes and ships moved into position for the attack.

Meanwhile, US officials continued a drip-feed of claimed intelligence to media outlets to support their portrayal of Iranian responsibility for Saturday’s strikes.

One official said the Supreme Leader approved the operation, but only it was possible to deny any Iranian involvement.

US officials said they have satellite photos, still unreleased, which show the Revolutionary Guards preparing the launch at Ahvaz Air Base in southwestern Iran. They said the drones and missiles crossed Kuwaiti airspace, flying about 400 miles to their Saudi targets.

An official said the significance of the photos was not realized before the oil facilities were hit: “We were caught completely off guard.”