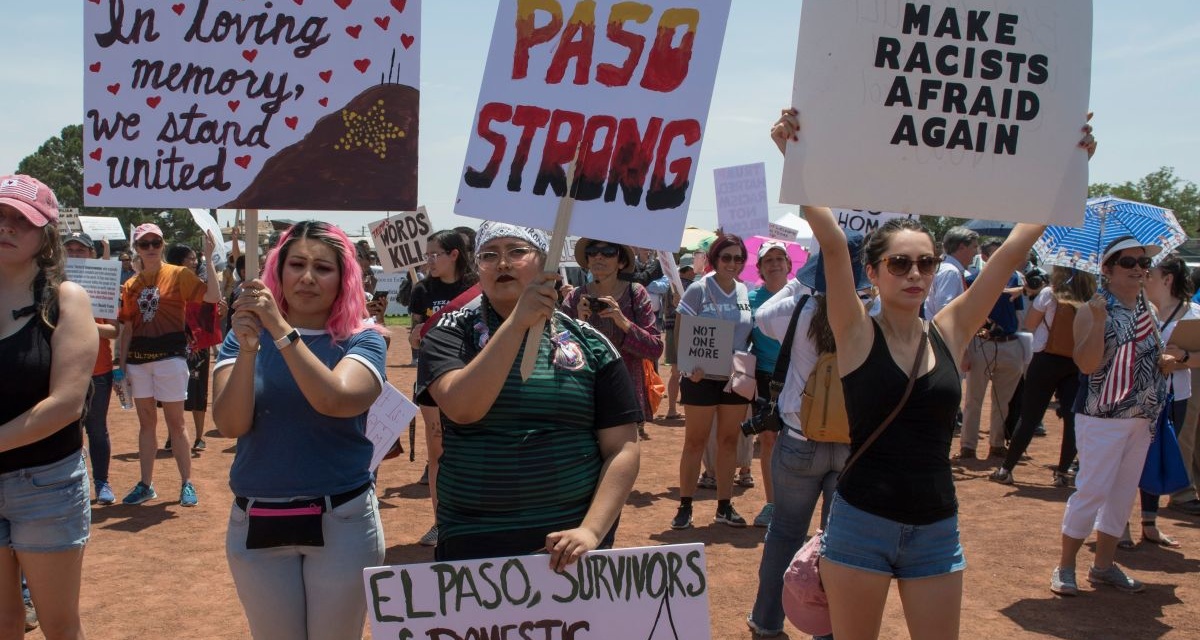 Donald Trump’s photo opportunities, at the sites of last weekend’s mass killings in Texas and Ohio, turn into Twitter insults of local leaders and the media.

Trying to counter criticism of the intersection of his anti-immigrant rhetoric and the “manifesto” of the El Paso suspect Patrick Crusius, Trump first visited Dayton, Ohio where nine people were killed and 27 wounded outside a bar by an assailant with a semi-automatic weapon. Trump then flew to El Paso, where Crusius is accused of killing 26 people and injuring 20 in a mall after posting that immigrants are replacing white Americans and that they must be sent back to their countries.

Trump has been challenged for saying little about white supremacy, only referring to it on Monday as he stumbled over a script prepared by his staff, and about substantive gun control measures. Instead, he has tried to blame video games, the Internet, mental illness, and the media for the killings.

Facing protests in both cities, the Trump camp carefully tried to manage the photo opportunities. No press were allowed to accompany Trump, let alone ask questions, as he went inside a Dayton hospital and met first responders in El Paso. Trump later told reporters, “I wish you could have been there to see it.”

White House @PressSec said earlier that members of the press were not allowed inside Trump's Dayton hospital visit because it wasn't a "photo op."

But Trump undermined the tactics, with his supposed mission for “national unity”, by tweeting insults throughout the day.

On Tuesday night, Trump had aimed at Beto O’Rourke, who was US Representative for the El Paso area and is running for President. He falsely claimed that O’Rourke has a “phony name to indicate Hispanic heritage” and told him, “Be quiet!”

An emotional moment: Beto O’Rourke meets Sean Nixon, 20, a Walmart employee who was there at the time of the shooting and helped a child.

O’Rourke asked if he was getting counseling, offered his personal cell number and said to call if he needs help. pic.twitter.com/GryDGQJWeD

[Editor’s Note: The young man later said that he was not a Walmart employee but was shopping for school supplies at the store. He said confusion arose because “I guess me doing all the crying.”]

But it was after leaving Dayton for El Paso that Trump directly snapped at leaders of the affected cities.

Having evaded hundreds of demonstrators for the photo security of the hospital, Trump took offense at a press conference by Dayton Mayor Nan Whaley and Sen. Sherrod Brown.

Both Whaley and Brown asked for a start on effective gun control measures, such as background checks and a “red flag” provision identifying those who might not responsibly handle weapons. But Trump took offense over the presentation of his visit: ” I saw failed Presidential Candidate (0%) Sherrod Brown & Mayor Whaley totally misrepresenting what took place inside of the hospital. Their news conference after I left for El Paso was a fraud.”

It was initially unclear why Trump was triggered, since Brown said Trump was “received well by the patients”, was “comforting”, and “did the right things.” Whaley said the wounded were “grateful” to see Trump and that he was “treated well by the victims, for sure”.

Shown Trump’s tweet, the Dayton Mayor said she was “confused”: “We said he was treated really well. I don’t know what you could talk about misrepresenting, so. Oh well, you know. He lives in his world of Twitter.”

When the Mayor of Dayton first saw @realDonaldTrump tweet about her pic.twitter.com/Z8YdyeebXp

However, Brown reportedly said that some people at the hospital privately said they do not support Trump. “A person briefly on what took place” said Trump reacted with fury aboard his plane, shouting at aides that no one was defending him.

Trump — or his staff — tried to recover by tweeting photos of him with Dayton police and hospital staff. But Trump then assailed Texas politicians Julian Castro, a Presidential candidate and former Housing Secretary, and US Rep. Joaquin Castro — “I don’t know who Joaquin Castro is other than the lesser brother of a failed presidential candidate (1%) who makes a fool of himself every time he opens his mouth.”

Then a tweet about the “GREAT people of El Paso” was overtaken by Trump attempt to say that the problem over anti-immigrant language and white supremacy was not with him, but with the Democrats:

The Dems new weapon is actually their old weapon, one which they never cease to use when they are down, or run out of facts, RACISM! They are truly disgusting! They even used it on Nancy Pelosi. I will be putting out a list of all people who have been so (ridiculously) accused!

Trump concluded his day with attacks on journalist Tim O’Brien, who wrote a book about Trump in 2005, and the outlets MSNBC and CNN.

Trump made no reference to the demonstrations over his visit.

Mr. Trump was greeted in both Dayton and El Paso by protests of unusual size for a presidential visit at a time of collective grief.

In Dayton, hundreds of demonstrators held signs as “Dump Trump” and “Do Something!” Trump supporters were out in smaller numbers.

In El Paso, residents held a day-long ceremony in a park near the University Medical Center. When Trump arrived at a nearby police emergency operations center, some held up a large white bedsheet with the inscription “Racist, Go Home”.

Judy Lugo, the President of the Texas State Employees Union, said, “I don’t think [the visit] is appropriate. The people here need to mourn, they need to be left alone.”

In Dayton, Jim Madewell, a retired printing press foreman, said Trump’s language “throws gasoline on the fire” of violence: “He feeds on negativity and hate and fear.”

But Dan Scavino, Trump’s social media manager, tried to bury all of the questions and criticism — after attacking Mayor Whaley and Sen. Brown:

..The President was treated like a Rock Star inside the hospital, which was all caught on video. They all loved seeing their great President!