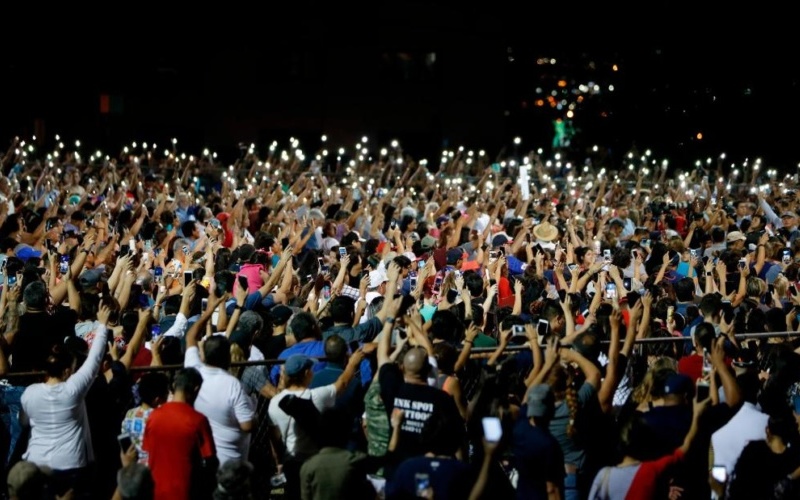 Vigil in El Paso, Texas for victims of a mass killing fed by hatred of immigrants, August 4, 2019

Trying to repair political damage from mass killings linked to his anti-immigrant rhetoric, Donald Trump will visit El Paso, Texas and Dayton, Ohio, the sites of the latest shootings.

Trump was muted on Sunday after the El Paso suspect Patrick Crusius, hours after posting an anti-immigrant “manifesto” paralleling Trump’s language, killed 20 people and injured in a mall. On Monday, Trump’s staff tried to limit the criticism with a statement denouncing racism and white supremacy, but Trump stumbled over the teleprompter’s words, tried to shift blame to culprits from video games to mental illness to the media, balked at any reference to his statements stigmatizing migrants, and did not mention any measures for gun control.

So Trump announced on Twitter yesterday, “Will be going to Dayton, Ohio and El Paso, Texas, tomorrow to meet with First Responders, Law Enforcement, and some of the victims of the terrible shootings.”

Dayton Mayor Nan Whaley, who said she was “disappointed” with Trump’s statement on Monday, said she would greet him respectfully while looking for a positive contribution:

He’s the President of the United States. When he comes as President I will greet him. I hope he’s coming here to add value and to help our community, and I hope it’s not about just a press hit and I hope it’s about him actually doing something.

But El Paso leaders have asked Trump not to come, after his inflammatory rhetoric about migrants as “animals” and his repeated declaration of an “invasion” of America — an assertion echoed by Crusius in his 2,000-word post as he allegedly drove 650 miles to carry out his deadly assault.

Veronica Escobar, the US Representative for the El Paso area, said on Monday, “He should not come out here while we’re in mourning.”

EA on BBC and RTE: “Send Them Back” — Trump and the El Paso Mass Killing

Trump risked more division and upset on Tuesday night. He attacked Escobar’s predecessor, 2020 Presidential candidate Beto O’Rourke, who has criticized Trump’s statements: “Beto (phony name to indicate Hispanic heritage) O’Rourke, who is embarrassed by my last visit to the Great State of Texas, where I trounced him….Be quiet!”

22 people in my hometown are dead after an act of terror inspired by your racism. El Paso will not be quiet and neither will I. https://t.co/dakFPKj0vJ

Meanwhile, Trump’s re-election refused to step away from its Facebook ads referring to an “invasion” of immigrants. A “senior Trump political adviser”, asked if the ads would be changed, said, “No.”

At any given moment, there are 100,000 migrants making their way through Mexico to attempt to break our immigration laws. By objecting to an accurate description of the situation, Democrats and the media are trying to make it impossible to oppose illegal immigration without being called racist.