Syria Daily: Turkey — Joint Ops with US for “Safe Zone” To Start Soon 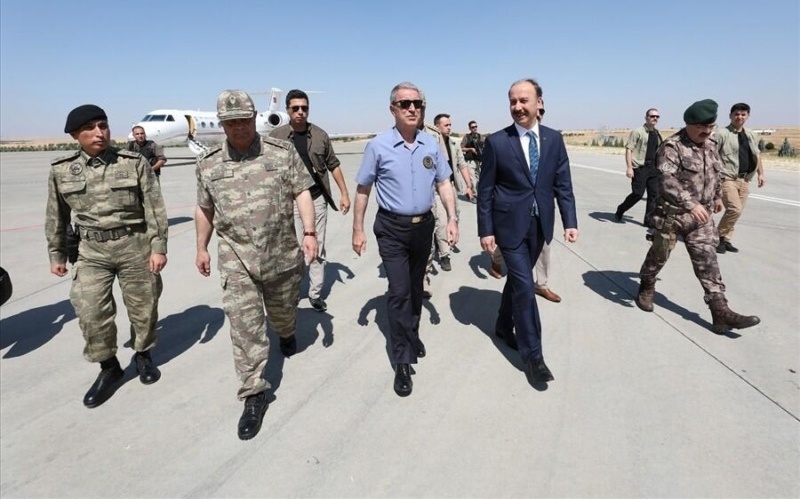 Residents and activists have updated information on Friday’s mass killing of civilians by Russia-regime attacks across Idlib Province.

Those slain included seven members of the Hammoud family in the village of Deir al-Sharqi in southern Idlib.

Video showed rescuers trying to dig out a body of a young boy from the rubble, and a photographer spoke of a man carrying the corpse of a young girl. A rescue worker carried the dust-covered body of a second child.

The White Helmets civil defense said four air raids were responsible for the victims including the family, whose children were all under 18 and included a 4-year-old. The father survived because he was not home at the time of the bombing.

At least 125,000 civilians have fled their homes in the past week, adding to more than 400,000 already displaced by Russia-regime attacks since late April.

Turkish Defense Minister Hulusi Akar has said that a joint Turkish-US center for a “safe zone” in northeast Syria will soon be fully operational.

After months of discussions and political maneuvers, Ankara and the US agreed earlier this month to set up the joint operations center, but gave no details on issues of difference. These included the depth of the zone along the Turkish-Syria border, across territory with a large Kurdish population, and on Turkish or joint patrols.

Last week a US delegation visited southeast Turkey for discussions on implementation, as Turkish drones began overflights of the zone.

Akar did not speak about the resolution of the zone’s depth, where Turkey wanted 30 km (19 miles) and the US only 15 km (9 miles) across a strip of 400 km (250 miles). However, he said the two sides agreed on control and coordination of airspace, andon the removal of the Kurdish YPG militia with their heavy weapons taken.

The YPG is the primary faction in the US-supported Syrian Democratic Forces, created in autumn 2015 to remove the Islamic State from the northeast. But Turkey considers the YPG to be part of the Turkish Kurdish insurgency PKK, which has battled Ankara’s security forces for more than 30 years.

Kurdish officials have agreed that the militia will pull back 5 km (3 miles) from the Turkish border.

“There has been certain progress. It marks a good start. There are still things to be done, the efforts will continue,” Akar said.

Turkish President Recep Tayyip Erdoğan announced his intention for the safe zone last December, after Donald President impulsively declared the withdrawal of all American troops, including those alongside the Syrian Democratic Forces.

But the Pentagon pushed back against Trump’s order, gradually ensured the ongoing presence of the US military.

Erdoğan and senior Turkish officials then stepped up announcements that the Turkish military would cross the border to ensure the withdrawal of the “terrorist” YPG. In recent weeks, the President has promised operations between the Euphrates River and the Iraq border, a declaration echoed by Foreign Minister Mevlüt Çavuşoğlu last week.

Akar maintained the verbal pressure, criticizing the US “for cooperating with the YPG terrorists” and urging an end to the arrangement as soon as possible.

The site Daily Sabah, close to the Erdoğan Government, has broadcast the challenge to the Trump Administration. On Saturday, it carefully endorsed the announcement over the “safe zone”:

The history of Ankara and Washington’s dispute over Syria is full of US promises that were not kept. That is why Turkey is ready, but is also very cautious to welcome a final agreement that will set up a joint operation center.

Jadan Ali of the Kurdish National Council told Rudaw English that Kurdish parties will welcome the zone if a US-led coalition oversees security.

If it is under the supervision of the coalition — America and other countries, not just Turkey — it is a good thing as the people of the region, especially Kurds, will be protected from attacks by Bashar al-Assad and Turkey.

He said a safe zone should cover all Kurdish areas: “We want all of Rojava to be covered by the safe zone.”

Ali said Kurdish officials have set out their position in meetings with US, Russian, and French representatives.