Syria Daily: Turkey — “Assad Regime Must Not Play With Fire” 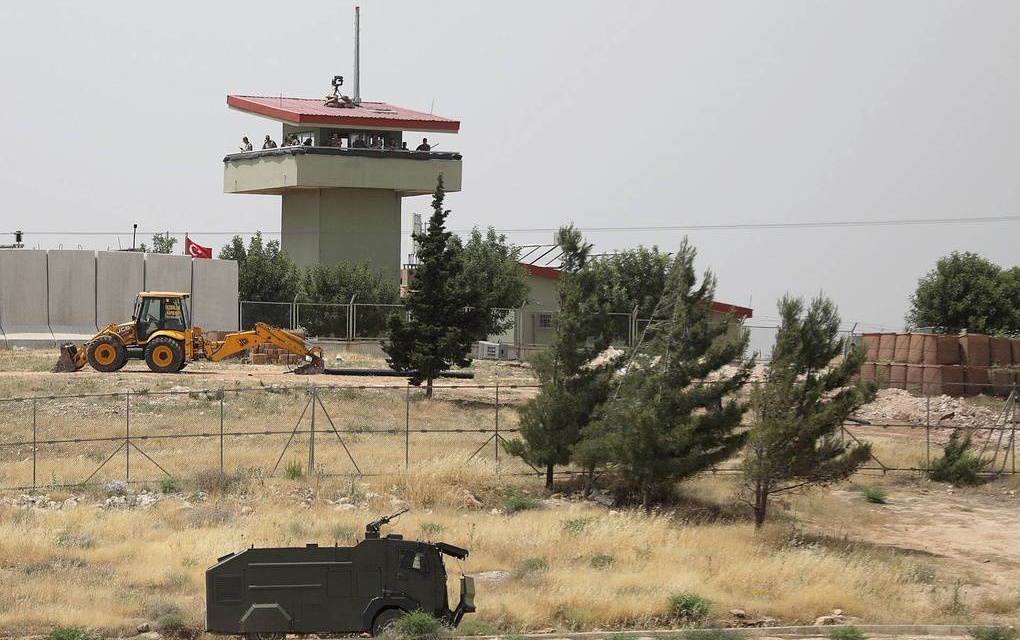 The Turkish observation post at the Atmeh crossing on the Syrian-Turkish border, Idlib Province, Syria, May 31, 2019 (Khalil Ashawi/Reuters)

Syria and Russia in the Age of Disinformation

Bashar al-Assad has tried to capitalize on the Russia-regime advance in northwest Syria with a photo opportunity with a Russian delegation.

The two sides reviewed the developments of the war on terrorism in Syria, with Sablin and the delegation members congratulating President al-Assad on the victories achieved by the Syrian Arab Army against terrorists, particularly the recent victories in Idlib countryside.

Sablin and the delegation members voiced confidence that these victories will eventually lead to establishing security and stability across the entirety of Syrian territory.

Assad repeated his line that “every inch of Syria must be liberated” for his rule.

Trying to hold on in northwest Syria amid a Russia-regime offensive on the last major opposition area, Turkey has warned Damascus “to not play with fire”.

Ankara was unable on Monday to check the offensive’s advance as it entered the “ghost town” of Khan Sheikhoun, site of an Assad regime sarin attack in April 2017, and reached the M5 highway between Aleppo and Homs. A 28-vehicle convoy with seven tanks, six loaders, and trucks with ammunition was blocked by Russian bombing from taking up positions south of Khan Sheikhoun. Regime shelling of the convoy killed three people and wounded 12, according to the Turkish Defense Ministry.

There were conflicting reports about the scale of the retreat of anti-Assad forces on Tuesday. At one point, both pro-opposition and pro-Assad activists said northern Hama Province and areas south of Khan Sheikhoun in southern Idlib Province had been evacuated, with anti-Assad fighters gathering at a Turkish observation post at Morek on the M5 highway.

But the Islamist bloc Hay’at Tahrir al-Sham said the claims were untrue, and pro-Assad accounts said Khan Sheikhoun had not been fully occupied and their opponents were still in parts of northern Hama.

Turkish Foreign Minister Mevlüt Çavuşoğlu warned on Tuesday, “The regime needs to not play with fire. We will do whatever it takes to ensure the security of our soldiers and observation posts. We hope it does not reach that point.”

A BBC journalist said that Russia had offered to escort the Turkish troops out of the Morek observation post, one of 12 around northern Hama and Idlib to enforce a demilitarized zone shattered by the Russia-regime attacks. But Çavuşoğlu said there would be no withdrawal.

“Idlib has a critical place in Syria’s future,” the Foreign Minister told the press conference in Ankara. He said Turkey has kept open communication channels with Russia.

Ankara and Moscow declared the 15- to 20-km (9 to 12.5-mile) deep demilitarized zone last September. At the start of August, with the Russia-regime offensive stalled for more than two months, the two countries and Iran held their 13th round of talks in the Kazakh capital Astana, ostensibly seeking a political resolution of the 101-month conflict.

The greater Idlib area hosts an estimated 3 million people — 20% of Syria’s remaining population — many of them displaced from other parts of the country.

Turkish officials, including President Recep Tayyip Erdoğan, have warned that the Russia-regime attacks would bring another stage in the refugee crisis around the conflict. Turkey hosts 3.6 million Syrian refugees, but has largely shut its border to any new entries since 2016.

Turkey’s military forces have been in northwest Syria since August 2016 alongside rebels, initially to drive out the Islamic State and then to take most of the Kurdish canton of Afrin.

Ankara backs the National Liberation Front and National Army. Both are opposed to the Islamist bloc Hay’at Tahrir al-Sham, which controls much of Idlib; however, the factions have approached military co-operation in the face of the Russian-regime offensive.