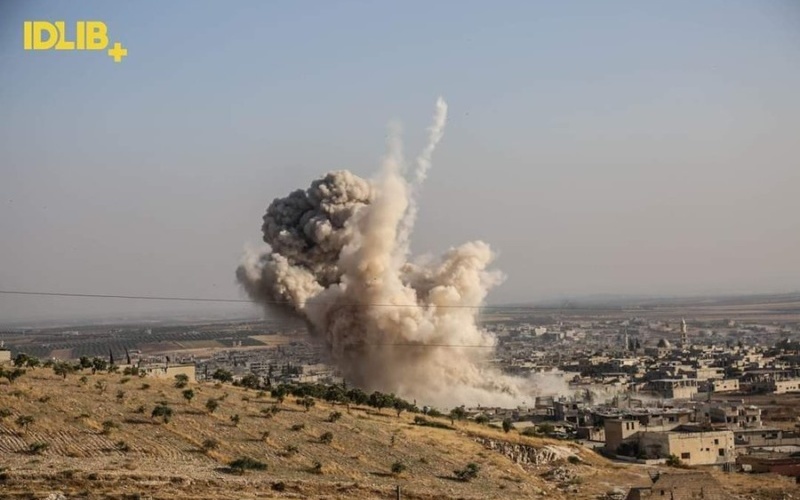 Russia and the Assad regime have resumed attacks on opposition-held northwest Syria, breaking a four-day pause declared by Damascus.

Russian and regime forces, whose spring offensive shattered a demilitarized zone announced last September by Moscow and Turkey, bombed and shelled both rebel positions and civilian areas throughout Monday.

The regime’s military said last Thursday that it was halting operations, which have killed more than 700 civilians and wounded more than 2,200 since late April, as it gave an ultimatum to anti-Assad forces to withdraw 20 km (12-mile) demilitarized zone around Idlib and northern Hama Provinces.

Yesterday, an army statement said, “The agreement to a truce was conditional.. This did not happen.. We resume our military operations against terrorist organisations.”

The Russian military issued the pretext that the anti-Assad forces had fired missiles on Russia’s main airbase, Hmeimim in western Syria.

#Syria State-owned news agency retracts its 'breaking news' of rebels targeting #Russia airbase after #Jableh residents take to FB denouncing it as 'fake news', others reporting 'not hearing a thing'.
Jableh is only 2 miles from #Hmeimim airbase. pic.twitter.com/3le14T3yfk

Among the areas attacked was the “ghost town” of Khan Sheikhoun, in southern Idlib Province on the M5 highway between Aleppo and Homs. Tens of thousands of residents, many of them who have been displaced earlier in the Syrian conflict, have fled incessant pro-Assad assaults.

Areas of northern Hama such as Latiminah and Kafrzita were also struck. Bombing resumed on Kabani, the hilltop town in northern Latakia Province which is a gateway to Idlib, and the site of repeated regime failures since early May.

Despite the “ceasefire”, the regime had continued shelling of opposition-held towns and villages, claiming that the Turkish-backed National Liberation Front and Islamist bloc Hay’at Tahrir al-Sham were still firing.

We report from Syria where eyewitnesses tell us the regime have violated a ceasefire which began across the northwestern region late on Thursday pic.twitter.com/kIAj4gp1cm

Capt. Naji Mustafa, a National Liberation Front spokesman, told Reuters, “Today Assad’s gangs announced they were resuming the battles and we tell them we are ready and our will to fight is there and God willing we will inflict heavy casualties.”

The May 6 offensive by the Assad military, supported by Russian airstrikes and ground advisors, broke the 15-km deep, 100-km long demilitarized zone.

The offensive initially seized several towns and villages in northwest Hama Province, but was then checked. Anti-Assad forces regained some of the territory in June, and continued raids that seized weapons and inflicted casualties.

Amid repeated attempts and Russian airstrikes, the regime forces could not advance further until they took the hilltop of Tal Maleh, overlooking a road connecting two regime-held villages, last week.