Syria Daily: No Russia-Regime Airstrikes But Shelling Continues in Northwest 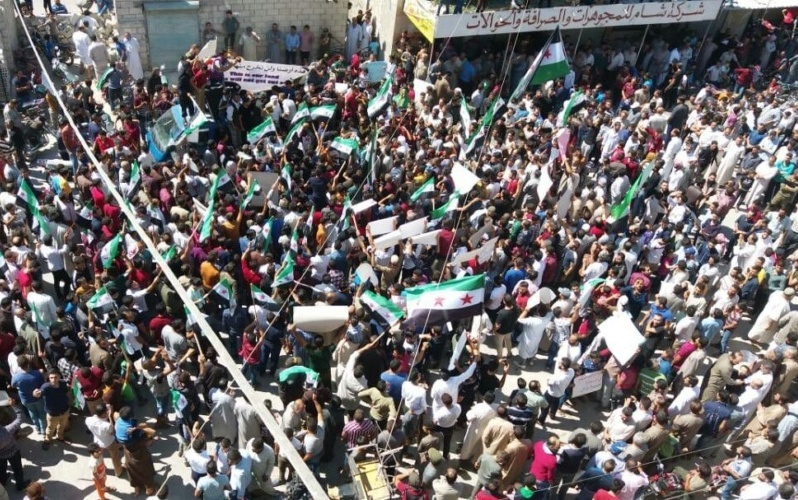 The opposition Syrian National Coalition has supported Turkey’s denial that Syrian refugees are being deported.

The Coalition said in a press statement on Friday, “As stated by the Turkish authorities to us at the highest level, in Turkey there is no operation targeting Syrians with the aim of deporting them.”

Refugees, activists, and human rights organizations say that, with anti-Syrian sentiment rising in parts of Turkey, authorities are sending busloads of displaced men back to uncertainty in opposition-held northwest Syria.

Those deported say they have been held and moved after they were stopped at checkpoints for not having valid ID cards and travel permits.

Turkish officials say that Syrians without permission to be in Istanbul are being moved to cities where they are registered. They claim unregistered Syrians are being held in camps inside Turkey until registration is completed.

Turkish police raided private homes of Syrians *after midnight* in Beşyol and Sultangazi in Istanbul and checked IDs. Those whose kimlik was not from Istanbul were told that they must return to the province where they first registered by August 20 or face deportation.

The Coalition echoed the line of the Turkish officials:

We observe that the Turkish Government has launched efforts to ensure public order under its migration strategy and is implementing a monitoring mechanism for unregistered illegal migrants and for Syrians who are registered in another city, but currently living in Istanbul.

The officials we met have underlined that, in accordance with its humanitarian and balanced policy, the Turkish Government has no intention of deporting our citizens who fled from the war and took refuge in Turkey.

Interior Minister Süleyman Soylu said that more than 92,000 Syrians have been granted citizenship.

“Among them, 47,000 Syrians are adults and 45,280 are children. Most of them are teachers, engineers and qualified people who can make their own living,” Soylu said.

Indirectly addressing the deportation issue, he said 547,000 Syrians — out of 3.6 million refugees — are currently living in Istanbul: “They have already been given the permission to live in Istanbul. We are not registering new ones. We only register university students or when they want to run a business or there is a health issue in question.”

He said only 7,000 Syrians have registered in Istanbul for humanitarian reasons since January.

ORIGINAL ENTRY: Russia and the Assad regime have halted airstrikes in northwest Syria, but shelling of the last major opposition area continues.

The regime said on Thursday that it would cease fire, stopping a three-month offensive in northwest Hama Province and strikes on civilian areas across Hama and Idlib Provinces, if anti-Assad forces withdrew 20 km (12 miles) around the perimeter of the area.

Local sources confirmed that aerial attacks stopped at midnight, but said that more than 200 artillery shells and rockets were fired from regime positions by late afternoon on Friday.

“There are no air strikes but the planes have not stopped flying above….There are no attempts to advance on either side,” said Colonel Mustafa Bakour, a commander in the rebel faction Jaish al-Izza.

“Safety of Civilians” Must Be Guaranteed

During the latest round of talks in the Kazakh capital Astana, opposition officials said the ceasefire must “guarantee the safety of civilians” and reserved the right to respond to “violations by Assad’s regime and its militias”.

The Turkish-backed rebel National Liberation Front said any Russia-regime attack would cancel the ceasefire and would bring retaliation.

The offensive initially seized several towns and villages in northwest Hama Province, but was then checked by rebels and the Islamist bloc of Hay’at Tahrir al-Sham. Anti-Assad forces regained some of the territory in June, and continued raids that seized weapons and inflicted casualties.

Despite repeated attempts and Russian airstrikes, the regime forces could not advance further until they took the hilltop of Tal Maleh, overlooking a road connecting two regime-held villages, earlier this week.

The National Liberation Front said the ceasefire proved the failure of “the criminal regime’s military operation against the liberated north”.

Since late April, the Russia-regime attacks on civilian areas have killed more than 700 civilians and wounded more than 2,200. At least 330,000 of Idlib and northern Hama Province’s 3 million population — about 20% of those remaining in Syria — have been displaced. More than 30 medical facilities and at least 34 civil defense positions and vehicles were struck.

In the presence of the Syrian Civil Defense and Health Directorate; a press conference was held yesterday, under the title "#Idlib Under Fire". Discussions took place about the statistics of civilian victims due to the recent regime and Russian campaign on the north of #Syria. pic.twitter.com/agqUEBivbC

The head of the Assad regime’s delegation at the Astana tanks, its ambassador to the UN Bashar al-Ja’afari, tried to put pressure on Turkey, whose forces have been in the northwest alongside rebels since August 2016:

Syria does not see an honest application by the Turkish regime to Astana understandings and Sochi Agreement on Idlib, which stipulates for the withdrawal of the terrorist organizations to a depth of 20 km and the withdrawal of heavy and medium weapons.