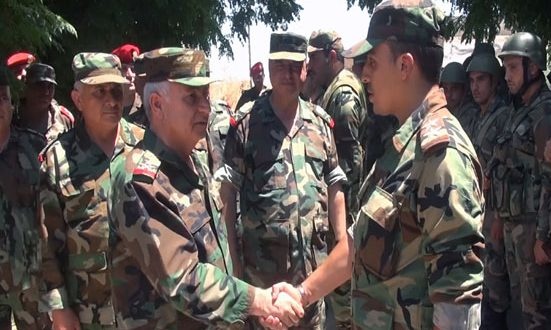 The Assad regime has hailed an “important” advance in a 3 1/2-month offensive to reoccupy the last major opposition area in Syria.

The regime sent the Defense Minister, Maj. Gen. Ali Abdullah Ayoub, to greet troops in the town of Hobeit in northwest Syria. The visit came on the religious day of Eid al-Adha.

Enabled by intense Russian bombing and ground advisors, the Assad forces have made their first significant gains in more than two months in northern Hama and Idlib Provinces, home to about 3 million Syrians — 20% of the country’s remaining population.

At the start of August, the offensive finally took Tal Maleh in northwest Hama, after repeated attempts to capture the hilltop overlooking a road connecting two regime-held towns. Then, after breaking a self-declared four-day “ceasefire”, the assault gained the village of Zakah last Wednesday.

The advances open the way to a drive to advance to the M5 highway, which connects Aleppo and Homs, in southern Idlib.

Turkish-supported rebels and the Islamist bloc of Hay’at Tahrir al-Sham had reversed some of the initial gains of the offensive, which began in late April with bombing across northern Hama and Idlib. The situation was stalemated since June until this month’s breakthrough.

Rebel sources said they could not maintain positions in Zakah and Hobeit on open ground amid the escalation of Russian airstrikes.

The opposition has been concentrated in northwest Syria since the Assad regime, empowered by Russia and Iranian-led forces, retook all of the south last year.

Since late April, Russian-regime bombing and shelling have killed more than 720 civilians, wounded more than 2,200, and displaced more than 400,000.

UN officials said last week that “39 health facilities, 50 schools, water points, markets, bakeries, and multiple civilian neighborhoods…have received a direct hit”. They warned of a threat to “millions of lives of civilians”: “These people don’t know where to go. A total panic has resumed again.”