Syria Daily: Another Mass Killing in “Insane” Russia-Regime Bombing of Idlib in Northwest 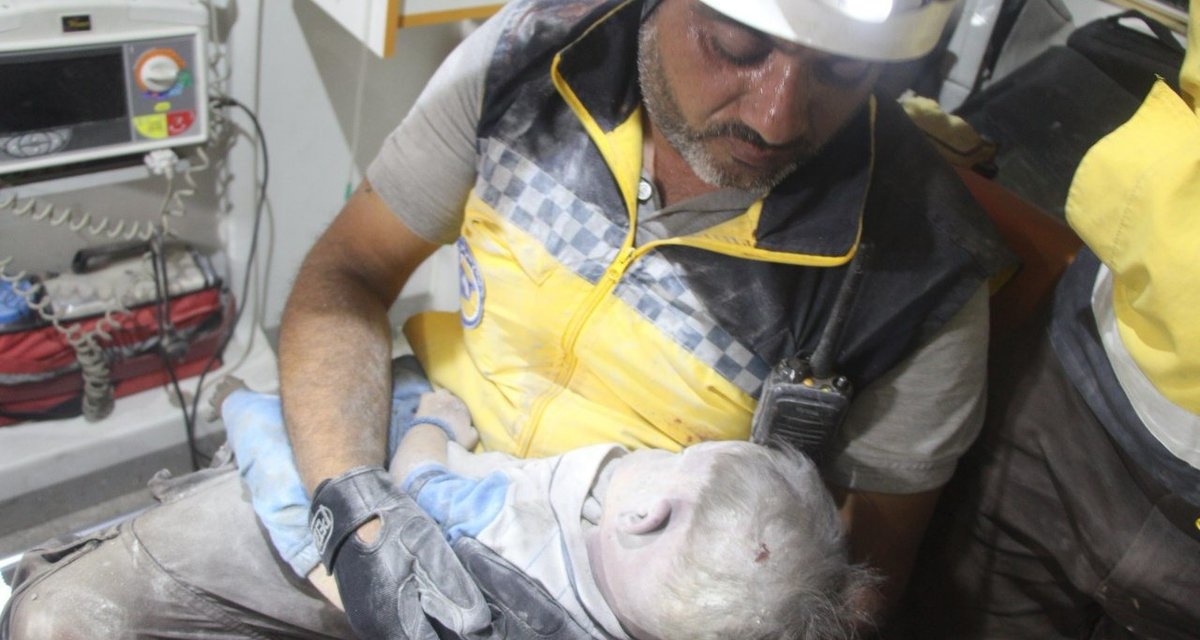 Russia and Assad regime warplanes carried out another mass killing on Wednesday, in bombing of civilian sites across opposition-held Idlib Province in northwest Syria.

Amid near-constant overflights and attacks, at least 13 civilians were murdered and 34 wounded in the town of Ma’arat al-Nu’man, a likely target of the Russian-regime ground offensive in the near-future.

The White Helmets civil defense said six children and two women were among the victims when a warplane fired 12 missiles on the western part of the town.

Tens of thousands of residents have fled Ma’arat al-Nu’man in the last two weeks, but others — lacking resources and lacking space in an opposition area with an estimated 3 million Syrians, 20% of the country’s remaining population — remain.

The market in Saraqeb was targeted, and a man and a child were killed in Maasaran in southeast Idlib.

The casualties brought the total of killed to 22 in two days and about 900 since the Russia-regime offensive began in late April. Thousands have been injured, and more than 400,000 displaced. About 50 medical facilities and more than 87 educational sites have been attacked.

As usual, this heightened level of brutal air tasks on #Idlib comes merely one day after a political meeting on #Syria. It has become routine that after such meetings take place, the outcome is more suffering for the Syrian as they pay the price with their lives and land. pic.twitter.com/15dq51ox0j

One local source told EA, “This is an insane Russian bombing campaign, a dozen Russian jets plus a couple of Assad’s unloading on civilian neighborhoods.”

The warnings limited the casualties, but could not prevent them in Ma’arat al-Nu’man, on the M5 highway between Aleppo and Homs.

A simple video explaining the suffering we experience every day
When the bombing happened I ran to the bombing site. Bloody scenes and very sad
The remains of children and civilians fill the place with a complete holocaust against civilians and children. pic.twitter.com/ATwzZ09mLj

In a pointed signal to Turkey, one of the strikes was near a Turkish observation post in northern Hama Province.

Erdoğan appealed for a halt to the “humanitarian crisis” of the Russian-regime attacks, but Putin brushed him aside, claiming agreement “to neutralize the terrorists’ nests in Idlib and normalize the situation there”.

Yesterday’s strikes were close to the Turkish post in Sher Maghar village at the border of northern Hama and Idlib. About 500 meters from the post, Assad regime forces were attacking anti-Assad fighters, a Turkish source told Reuters.

Assad regime forces have periodically shelled the ring of 12 Turkish observation posts around Idlib and northern Hama Province, set up to oversee a now-shattered demilitarized zone declared by Russia and Turkey last September.

Two weeks ago, as the offensive broke anti-Assad resistance and seized almost all of northern Hama Province and part of southern Idlib, regime shelling and Russian bombing prevented a Turkish military convoy from taking up positions south of the “ghost town” of Khan Sheikhoun.

The offensive completed the occupation of Khan Sheikhoun and the area to the south two days later. It is expected, in its next phase, to move up the M5 highway and attack Ma’arat al-Nu’man.

Meanwhile, the Turkish observation at Morek in northern Hama is isolated.

Turkish Foreign Minister Mevlüt Çavuşoğlu warned last week, “The regime needs to not play with fire,” but Turkey has taken no military steps after the stalled convoy to check the offensive and prevent attacks on civilian areas.

A local activist summarized, “Turkish patience [with the Russians] is unbelievable.”

Erdogan spoke by phone with Donald Trump late Wednesday. The two men decided to continue cooperation to protect civilians in Idlib, according to Turkey’s State-owned Anadolu News Agency, but no details of steps for protection were offered.

Video of the aftermath of the Ma’arat al-Nu’man mass killings (Warning: Graphic Images):