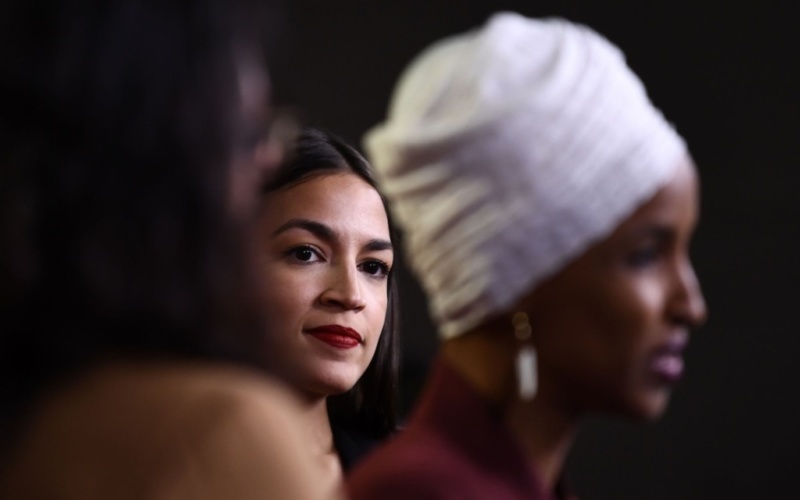 Four progressive Democratic Congresswomen stand firm, even as Donald Trump doubles down on his racist tweets attacking them: “We can not, we will not, be silenced.”

The quartet — Rep. Alexandria Ocasio Cortez of New York, Rep. Ilhan Omar of Minnesota, Rep. Rashida Tlaib of Michigan, and Rep. Ayanna Pressley of Massachusetts — held a press conference on Monday after Trump told them to “go back” to “the totally broken and crime infested places from which they came”.

Many people expressed shock and anger on social media over Trump’s taunts, and Democrats rallied around the Congresswomen although Republican legislators were silent. Undeterred, Trump — showing off his tactics for re-election in 2020 — continued the insults and false allegations throughout Sunday and Monday, labeling the Congresswomen as anti-Semitic and allies of Al Qa’eda.

Rep. Omar, the only one of the four born outside the US, said at the press conference:

He’s launching a blatantly racist attack on four duly elected members of the United States House of Representatives, all of whom are women of color.

Rep. Pressley summarized, “This is simply a disruption and a distraction from the callous, chaotic and corrupt culture of this administration”:

Despite the occupant of the White House’s attempts to marginalize us and to silence us, please know that we are more than four people. We ran on a mandate to advocate for and to represent those ignored, left out, and left behind.

Our squad is big. Our squad includes any person committed to building a more equitable and just world, and that is the work that we want to get back to. And given the size of this squad in this great nation, we can not, we will not, be silenced.

Ocasio-Cortez followed up, “I want to tell children across this country that no matter what the President says, this country belongs to you, and it belongs to everyone.”

However, Trump stepped up his vilification of the Congresswomen, both in comments to reporters and on Twitter.

“They hate America,” he maintained. “They’re free to leave if they want,” he added, trying to cover himself with the unsupported assertion, “A lot of people love [my comments] by the way.”

Pushing another theme in his campaign portrayal of Democrats as “extremist”, Trump repeatedly said the Congresswomen were “anti-Israel”. He went farther with Omar, saying she had proclaimed “love” for Al Qa’eda.

Omar responded that she would not “dignify” Trump’s remark:

Every time there is a white supremacist who attacks or there is a white man who kills in a school or in a movie theater, or in a mosque, or in a synagogue, I don’t expect my white community members to respond on whether they love that person or not.

Trump expanded his barrage with the claim that House Speaker Nancy Pelosi is a racist — because Pelosi, allying with the Congresswomen, said Trump was using the language of white nationalism — and closing his day:

The Dems were trying to distance themselves from the four “progressives,” but now they are forced to embrace them. That means they are endorsing Socialism, hate of Israel and the USA! Not good for the Democrats!

Trump also displayed the link between his attacks on the Congressmen and an emphasis on anti-immigrant and anti-migrant rhetoric throughout his re-election campaign. He falsely said that Democrats want “Radical Left Democrats want Open Borders” and insisted that migrant “Detention facilities are not Concentration Camps!”

Trump’s “zero tolerance” policy putting a priority on detention of migrants and deportation of undocumented immigrations is under pressure from revelations of inhumane conditions, including for women and children, in the detention centers.

Lawyers and journalists have begun detailing the extent of the deprivation, illness, lack of hygiene and clean water, and poor food in the facilities. Ocasio-Cortez was in a Democrat Congressional delegation that toured two Texas centers in late June and brought out more information on the conditions.

The four Congresswomen have emphasized a positive response to Trump’s rhetoric, setting out the need for action on education, health care, economic justice, and the environment and climate change as well as immigration.

A resolution was introduced in the House on Monday evening which cites positive statements by US founders and past Presidents of both parties about the importance of immigrants. It “strongly condemns President Trump’s racist comments that have legitimized increased fear and hatred of new Americans and people of color”.

Omar, citing the “human rights abuses” of Trump’s policies, said yesterday, “This is a pivotal moment in the history of our country. The eyes of history are watching us.”

Ocasio-Cortez cited a series of points about Trump’s corruption and destructive politics and continued, “But I also know that we’re focused on making it better. Because we don’t leave the things that we love — and when we love this country, we propose the solutions to fix it.”

Omar explained, referring to policies for health care, infrastructure, and clean water, “Every single statement we make is from a place of extreme love for every single person in this country. It is part of the mandate why we ran for office and why we got elected.”