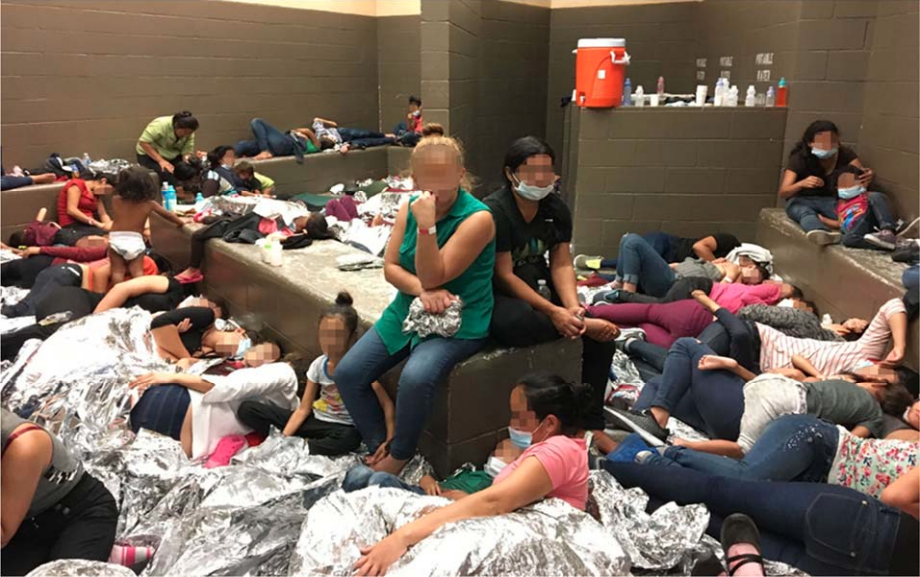 The Department of Homeland Security’s watchdog confirms inhumane conditions at migrant detention centers in the southern US — and says they are even worse than revealed by lawyers and legislators.

Department inspector visited five facilities in Texas’s Rio Grande Valley in June. Children had few spare clothes and no laundry facilities. Many migrants were given only wet wipes to clean themselves. A diet of bologna sandwiches caused constipation and other illnesses. Children at two of the five facilities in the area were not given hot meals until inspectors arrived.

Amid severe overcrowding, migrants banged on cells and pressed notes to windows, begging the inspectors for help.

There were general reports last year, soon after the introduction of the Trump Administration’s policy of “zero tolerance”, of the conditions. On a rare visit allowed to one of the detention centers, reporters saw children held behind steel fencing, with inadequate medical care, food, and hygiene.

A Window on Inhumanity

But officials largely shut out any view of the facilities, and it was only last month that a detailed report of a center — in Clint, Texas — came out after troubled lawyers went to the media with descriptions of hundreds of children in a crowded warehouse. They said the juveniles were suffering from flu and lice, without basic necessities such as toothbrushes, soap, and blankets.

On Monday, more than 12 Democratic legislators toured the Clint facility and one in El Paso, where they found women held in rooms without running water and soap, sleeping bags on concrete, and children separated from families. Detainees had gone 15 days without a shower, and were allowed to start bathing only four days ago after the congressional visit was announced. Some said they were forced to drink out of toilets when faucets broke.

The House Judiciary and Oversight Committees both announced hearings next week into the conditions. Rep. Elijah Cummings, the chairman of the Oversight Committee, demanded that the acting Homeland Security Director Kevin McAleenan and acting head of Customs and Border Protection Mark Morgan testify about the report.

Legislators also sought explanations for abuse of their colleagues on the Monday trip, not only from pro-Trump hecklers but also — according to the Democratic delegation — from border guards. A secret Facebook group of current and former border personnel posted obscene and racist taunts and pictures of representatives such as Alexandra Ocasio-Cortez and Veronica Escobar.

“There seems to be open contempt for the rule of law and for basic human decency,” Cummings said. “The committee needs to hear directly from the heads of these agencies as soon as possible in light of the almost daily reports of abuse and defiance.”

The Homeland Security report said 826 of the 2,669 children detained at the facilities were held longer than 72 hours, in violation of a federal court settlement and Customs and Border Protection policy.

Senior managers raised security concerns of “a ticking time bomb”. Detainees clogged toilets with blankets and socks for release from the crowded cells. When some refused to return, Border Patrol brought in a special operations team “to use force if necessary”.

Even last week Trump Administration were defying the mounting reports of intolerable conditions. McAleenan said the lawyers’ accounts of the Clint facility were “unsubstantiated” as it is “clean and well-managed”.

However, the defense unravelled with the high-profile coverage of Monday’s tour of Clint and El Paso. Rep. Joaquin Castro, defying the command to legislators to hand in mobile phones, brought out pictures and images of women in distress, and the abuse of the delegation added to concern that any investigation would be blocked.

Even some Republicans were moved to object. “These are not facilities that are designed to hold people for more than three days,” said Rep. Will Hurd of Texas, the only GOP representative for a US border district. “You shouldn’t be holding anybody in these facilities for more than that.”

The Administration responded to the exposure of the conditions at Clint by moving out all but 30 children. However, Homeland Security officials say other facilities are full.