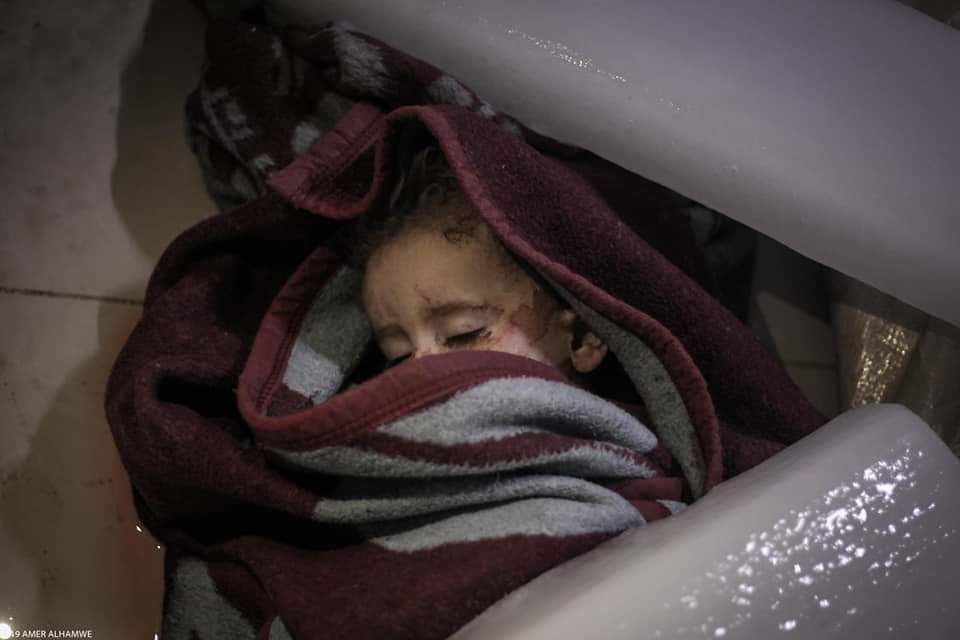 At least 12 civilians, most of them children, were killed on Friday by the latest Assad regime bombing of Idlib Province in northwest Syria, according to local activists and rescuers.

The victims were in the town of Muhambal, struck by warplanes and helicopters which dropped barrel bombs. Graphic photos have been posted of slain and wounded children.

White Helmets rescuers said an initial toll of three killed rose when the Assad warplanes attacked civilians who were fleeing the initial bombing.

Three children were killed, and 11 wounded so far, after warplanes airstrikes on #Mohmbal Town in #Idlib this evening. Following this attack, the Regime returned back over the area with barrel bombs causing new casualties. Our teams continue their search and rescue operations. pic.twitter.com/954ihoyrCD

Since April 28, at least 425 civilians have been killed and hundreds wounded. More than 330,000 of Idlib and northern Hama’s population — about 20% of those remaining in Syria — have been displaced. Almost 30 medical centers have been attacked, and several rescuers slain.

Despite the assault on civilians, the offensive has been unable to break resistance. Enabled by Russian airstrikes and advisors on the ground, Assad forces quickly took several towns and villages but was soon checked by Turkish-backed rebels and the Islamist bloc Hay’at Tahrir al-Sham. A counter-attack last month regained some of the territory in northwest Hama.

A scene and report on Thursday’s bombardment, which killed at least five people, including a 9-year-old boy:

A scene from the bombardment of the city of Kafranbel yesterday. pic.twitter.com/qJlkfo8iGo

Yesterday was so harsh.
There was one #martyr and two injured #civilians after more than fifteen explosive #barrels, several #airstrikes and #cluster #missiles on #Kafranbel city by #Russia and #Syrian #regime.#Rise4Idlib #EyesOnIdlib #saveIdlib #save_children #save_civilians pic.twitter.com/WQs3iO920K