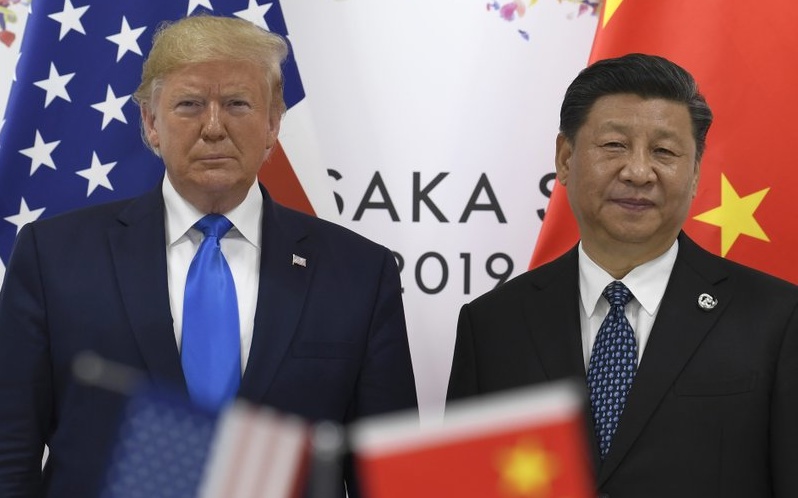 Donald Trump has confirmed in a press conference that he will not impose any new tariffs on Chinese exports as talks resume.

And, in an unexpected move, Trump withdrew a ban on the sale of American components to Huawei, the Chinese telecommunications giant: “US companies can sell their equipment to Huawei.”

He claimed that he suddenly shifted because he is helping US technology companies that had complained about the ban.

In May, the Commerce Department blacklisted Huawei, preventing it from obtaining chips, software and other equipment from the US.

In a rambling statement, Trump claimed that China some purchases of US farm goods and other products, even though he is maintaining the 25% tariff on $250 billion of Chinese exports.

China says trade talks with the US will resume, as Donald Trump meets Chinese leader Xi Jinping at the G20 summit in Japan.

Chinese media announced the resumption, and Trump told reporters after his meeting with Xi, “We discussed a lot of things, and we’re right back on track.”

He later added, “We had a very, very good meeting with China, I would say probably even better than expected, and the negotiations are continuing.”

The talks broke down in early May, when Trump escalated tariffs on $250 billion of Chinese products from 10% to 25% and threatened to impose duties on the remaining $300 billion of Beijing’s exports to the US. A week later, Trump declared a “national emergency” to tighten restrictions on Huawei, the world’s second-largest manufacturer of smartphones.

American negotiators said the Chinese side had balked at accepting some provision that had been agreed in an incomplete draft text.

China’s official news agency Xinhua said the Trump Administration has now agreed that new tariffs will not be imposed.

Trump launched the tariffs in June 2018, declaring that the Chinese were “ripping off” the US economy. He has persisted with them despite warnings from manufacturers, business, consumer organizations, farmers — and his own top advisors — of economic damage.

Trump has used the G20 for photo opportunities with other leaders and for a series of dramatic statements, such as his threat to impose tariffs on India and a jab at Japan which raised concerns that he might challenge a 70-year defense alliance between the US and Tokyo.

On Saturday, he added, via Twitter, an invitation to North Korean leader Kim Jong-Un for a third summit in just over a year.

After some very important meetings, including my meeting with President Xi of China, I will be leaving Japan for South Korea (with President Moon). While there, if Chairman Kim of North Korea sees this, I would meet him at the Border/DMZ just to shake his hand and say Hello(?)!

Trump’s advisors were not informed of his gambit, although The Hill site reported today that On Monday, Trump said in an interview that he “might” try to meet Kim during the trip to the demilitarized zone. The White House asked that the comment not be reported because of security concerns.

Trump claimed on Saturday, “I just thought of it this morning. We’ll be there, and I just put out a feeler.”

I consider this a very interesting suggestion, but we have not received any official proposal.

I believe that if a North Korea-U.S. summit is realized on the line dividing Korea, as President Trump wishes, it will become another opportunity to deepen the friendship that exists between the two heads of state and to improve relations of the two nations.

The first summit between Trump and Kim in June 2018 ended with a vague statement about “denuclearization” of the Korean Peninsula. The second in February in Vietnam was dramatically halted by a Kim walkout.

The office of South Korean President Moon Jae-in, who will have dinner with Trump on Saturday night, said, “Nothing has been decided, but our position remains unchanged that we want dialogue to happen between North Korea and the US.”

It’s like “The Bachelor”. But North Korea has stated clearly it will only denuclearize part of its weapons program, and this won’t change any of that even if they do shake hands.