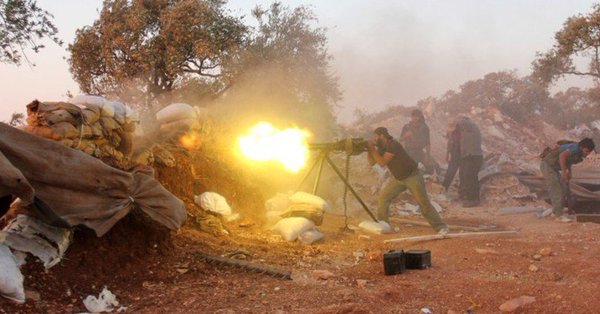 The Assad regime has again failed to advance in its eight-week offensive in northwest Syria, taking heavy losses in an assault on a key hilltop in northwest Hama Province.

A pro-Assad blog, fed by regime military sources, acknowledged another loss in the attempt to take Tal Maleh, which overlooks a vital road linking regime positions in the province, and the nearby town of Jibeen.

The blog said between 20 and 25 regime troops were killed and at least three “vehicles” were lost.

Pro-opposition activists echoed the report, adding that rebel forces had destroyed regime armored vehicles with anti-tank missiles. One site claimed at least 50 regime soldiers were slain and more than 100 wounded.

#Syria: #NLF wiped out today with a #Kornet a BMP on KafrHoud front (N. #Hama). pic.twitter.com/esT18KqlS7

The Russian-regime offensive began May 6. In its initial days, the assault captured several towns and villages. But despite intense Russian airstrikes, the advance soon stalled. A counter-offensive by Turkish-supported rebels and the Islamist bloc Hay’at Tahrir al-Sham in early June regained some of the territory, and lines have been static since then despite the regime moving in elite units from other parts of the northwest front.

The regime has tried several times throughout the offensive to seize Tal Maleh, but has suffered setbacks with casualties on each occasion.

Meanwhile, Russian and regime bombing and shelling has killed more than 400 civilians in neighboring Idlib Province, wounded hundreds, and displaced more than 330,000. Almost 30 medical facilities have been attacked, and several civil defense personnel have been slain.

Our heroes paid the ultimate sacrifice for their people. Their helmets have come off for the last time. We call for the world's support to keep our humanitarian workers out of the crosshairs..#WhiteHelmets #Syria #NotATarget pic.twitter.com/Icu3IqvoZM

Journalist Hadi al-Abdallah reports on pro-Assad airstrikes on civilian homes after the latest failure to advance in northwest Hama:

There are an estimated 3 million people — about 20% of Syria’s remaining population — in Idlib and northern Hama, the last major opposition area in the country.