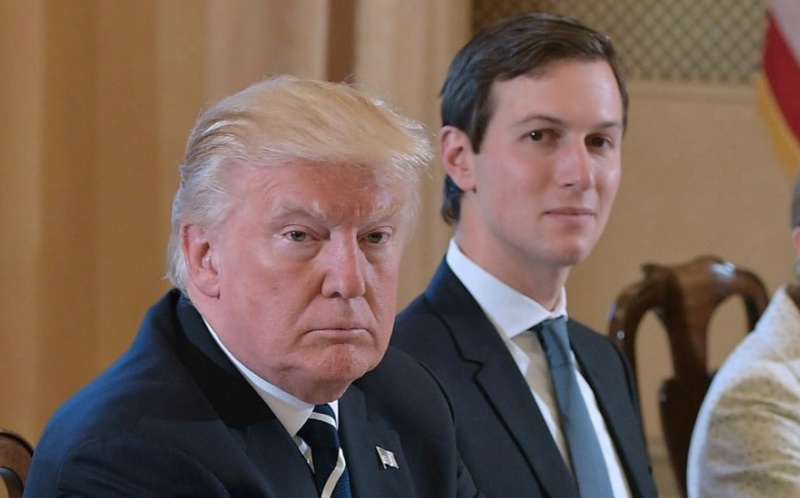 Donald Trump with son-in-law Jared Kushner, who objected to the tariffs on Mexico (File)

On Thursday, Trump linked his trade wars with his anti-immigration campaign. He announced on Twitter that a 5% tariff will be imposed on Mexico on June 10. The charge will escalate by 5% each month, to a maximum of 25%, “until such time as illegal migrants coming through Mexico, and into our Country, STOP”.

The duties on Mexico are being imposed three weeks after Trump raised tariffs on $200 billion of Chinese goods from 10% to 25% and threatened to impose the charge on the remaining $350 billion of Beijing’s products. He has also slapped steel and aluminum tariffs, including on the European Union, Canada, and Mexico, and he is threatening duties on Japanese and German automobiles.

And on Friday, the White House ended special trade status for India from June 5, pointing to tariffs on billions of dollars of Indian products.

Warnings Over Economic Damage and NAFTA

Economists, manufacturers, and business and consumers organizations have all warned that the duties on Mexico will add to economic damage, following a projection of $1.3 trillion lost in GDP from an extended trade war with China.

On Wednesday night, in an Oval Office meeting, Trump’s son-in-law Jared Kushner — phoning from his tour of the Middle East — argued that the tariffs could jeopardize Congressional ratification of a revised North American Free Trade Agreement with Mexico and Canada. He said he would work with the Mexicans on the immigration issue.

But Trump rejected the arguments and said the tariffs were going to be announced. The order was completed by the office of his hardline anti-immigration advisor Stephen Miller and by White House lawyers.

Other White House offices only learned on Thursday that the announcement was imminent. Some senior Republican legislators — including Senate Finance Committee Chairman Charles Grassley — were not told before Trump’s Twitter revelation.

As leading Mexican officials traveled to Washington on Friday and the US stock market fell, Administration officials offered little explanation of how the tariffs would check migration into the US.

Mexico has taken advantage of the United States for decades. Because of the Dems, our Immigration Laws are BAD. Mexico makes a FORTUNE from the U.S., have for decades, they can easily fix this problem. Time for them to finally do what must be done!

Trump again lied in tying migrant crossings to the entry of drugs into the US: “90% of the Drugs coming into the United States come through Mexico & our Southern Border. 80,000 people died last year, 1,000,000 people ruined”.

In fact, the large majority of drugs are intercepted at official US ports of entry.

Trump also put out his standard argument that tariffs are needed for any US trade deficit:

Mexico makes a FORTUNE from the U.S., have for decades, they can easily fix this problem….We have a 100 Billion Dollar Trade Deficit with Mexico. It’s time!

However, objections mounted from GOP legislators. Free trade advocates are being joined by border-state Senators and Representatives.

“While I support the president’s intention of stopping unchecked illegal immigration, I do not support these types of tariffs, which will harm our economy and be passed onto Arizona small businesses and families,” Sen. Martha McSally of Arizona said.

A spokesman for Sen. John Cornyn of Texas explained, “Senator Cornyn supports the President’s commitment to securing our border, but he opposes this across-the-board tariff which will disproportionately hurt Texas.”