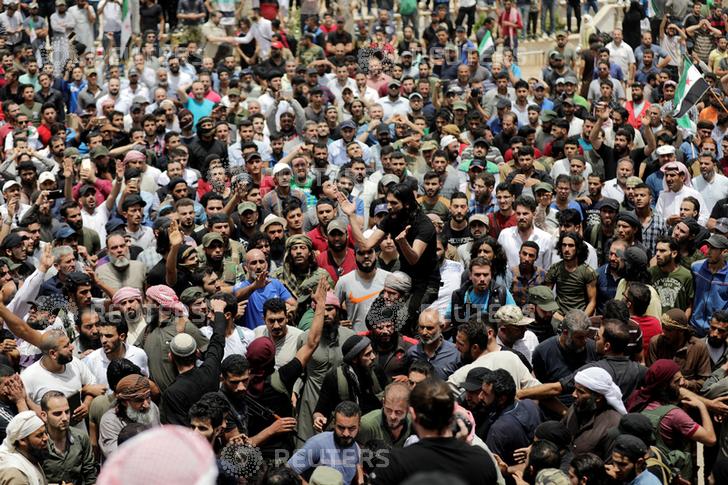 Thousands of Syrians gathered on Sunday for the funeral of Abdul Baset al-Sarout, the football goalkeeper who became a leader of resistance in Homs and the “Singer of the Revolution”.

Sarout, who organized local men to defend opposition areas of Syria’s third-largest city until they surrendered in 2014, died on Saturday of wounds suffered on the frontlines in northwest Syria.

A commander in the Jaish al-Izza rebel faction, he was injured on the first day of a counter-attack that has pushed back the Russia-regime offensive which began May 6 in northwest Hama Province.

People in al-Dana in Idlib Province stood on roofs to watch Sarout’s body, wrapped in white,carried through the town as Jaish al-Izza members fired guns into the air. In the mosque, men kneeled in front of his body to pray, some of them weeping.

“We all know Sarout’s songs and golden vocals. Today is a big loss, a sad day for the Syrian revolution. We lost one of its icons,” said Ali al-Zajel, an activist at the funeral.

Sarout was prominent in the protests which began in 2011, singing and leading chants as hundreds of thousands of people went to the streets in Homs and across Syria.

As men began to form armed units to face the Assad regime’s army and security forces, Sarout organized a brigade in Homs. The resistance was costly: his uncle and all four of his brothers were killed, and Sarout survived a series of assassination attempts.

After opposition areas of Homs fell, he organized another brigade to fight in central Syria before he — like many tens of thousands of Syrians — were forcibly transferred to opposition territory in the northwest.

Sarout was the center of an award-winning film about the Syrian uprising, Return to Homs. later drew controversy when he was accused by the hardline Islamists of Jabhat al-Nusra of fighting for the Islamic State.

In 2016, he gave an hour-long interview to talk about the Homs uprising, his decision to fight, and the battle to clear his name.

We took the decision to take up arms, because initially we went out with olive branches and bared our chests. We never had any intention of taking up arms.

After we showed the whole world the full picture of what was happening, once they saw us demonstrating with no bigotry or sectarianism and on top of that being killed.

We had no choice anymore but to defend ourselves, to defend our land and our honor and the matter of jihad in self-defense is nothing to be ashamed of. This is a commandment from God to defend oneself.