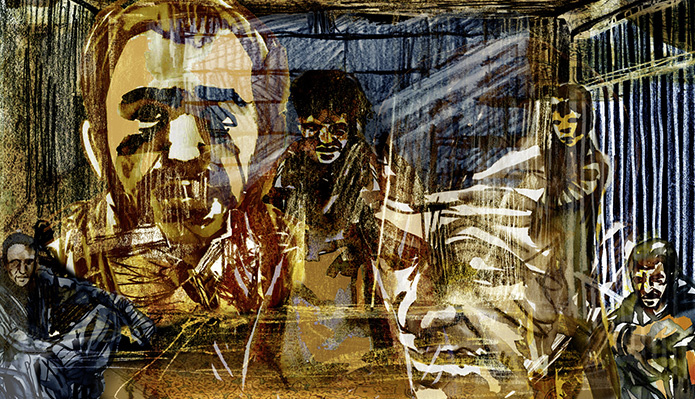 The article was originally published in 2017 but has received renewed attention on social media this week.

“They took off my clothes!”, the 11-year-old girl screamed. She didn’t seem to know what she was saying as she wandered the streets of her village, located in southern Syria near the city of Daraa.

Nora’s mother, Fatima, stumbled across her daughter by chance when she turned down this street. For the past few hours, she had been frantically searching for her child after hearing a rumor that a group of children who had been detained in a military base might have been released. As soon as she heard, the 35-year-old mother took to the streets, hoping beyond hope to find her missing daughter.

When she finally saw her child, Fatima struggled to recognize the features that she had once known by heart. She moved closer. Nora, in a state of shock, didn’t recognize her.

They had last seen each other only a month and a half before – 45 days to be exact. Yet it was as if an eternity had passed since May 3, 2011. It was the very beginning of Syria’s Arab Spring. All across the country, more and more people were joining protests against the regime of President Bashar al-Assad and the regime was cracking down. The wave of repression was at its bloodiest in Daraa and its surrounding region, the epicenter of the popular uprising.

In early May 2011, Syrian soldiers and pro-government militias known as the Shabihas had surrounded the town. As helicopters circled over the neighborhoods, soldiers went house-by-house to flush out the protesters they considered “terrorists.”

Karim, Fatima’s husband and Nora’s father, was accused of having helped people who were wounded by bullets fired during the protests. On that particular evening, Karim wasn’t at home. The soldiers ordered Fatima to contact him. She pleaded with them, trying to explain that she and her husband were “practically divorced,” but the soldiers didn’t want to hear any of it.

An officer’s gaze settled on the two children in the room: Nora and her younger brother. Fatima panicked. In an attempt to protect them, she told the officer that they weren’t her children. But terrified Nora cried out, “Mama!”

“We are going to hold your daughter hostage until your husband turns himself in,” the officer announced, grabbing Nora. He and his men hauled her off to a military base in Daraa [the exact location is withheld for security reasons]. The same night, Nora’s father, Karim, turned himself in at the military intelligence agency. Despite this, his daughter would remain a prisoner for the next 45 days. Karim, for his part, would never return.

Fatima told Zero Impunity her daughter’s story one morning in September 2016. The family fled Syria close to four years ago and they now live in an apartment in a poor neighborhood in Amman, the capital of Jordan.

Nora is now a fragile 16-year-old. Her purple abaya, which is dotted with white flowers, doesn’t hide how frail and slight her body is.

Fatima speaks in a low voice, but there is no mistaking her determination to speak out. Many Syrian parents have chosen to remain silent about the violence suffered by their children in an effort to protect them from the shame of the social exclusion that could ensue. Fatima, however, wants people to know about “what Bashar al-Assad did to us”.

With a slow movement, she pulls out several jars of pills from a well-worn handbag.
“Nora takes medicine to help calm her down,” she says gently. “I can’t tell you her story in front of her, or else…”

…Or else, she might hurt herself. Nora has already tried to kill herself several times.
Patiently, Fatima recounts the story that her daughter eventually told her.

When Nora arrived at the military base, she realized that she was not the only child there. More than 45 people, mostly women and teenagers, shared her cell. Starting very early in the morning, the prisoners were given pills. The youngest were also given injections. Nora endured regular blows from her jailers. On the 40th day, the jailers told the children to “get ready”. The children thought that the hour of liberation had finally arrived.

Soldiers took Nora from the cell. Soldiers undressed her then brought her into another room. There, a naked “man with grey hair” – the director of the military base– was waiting for her.

It pains Fatima to continue.

“Nora told me, ‘He took me. And he raped me. He slept with me.’ Nora screamed, she tried to flee, she struggled to escape his grasp.”

What happened next is deeply disturbing.

“He then gave her a small yellow pill and gave her a shot in her right arm. He hit her so hard that her head started spinning.”

The next morning, the little girl woke up in an interrogation room. She was covered with blood and several officers were standing around her. Why was there blood there? she wondered. What happened? Nora has no idea what these other men did to her.

“She remembers seeing the man who raped her,” says her mother. “But she has no idea what the others did to her.”

“There is proof that girls and boys scarcely over the age of 12 have experienced sexual violence, including both torture to their genitals and rape,” said international human rights organization Save the Children in its 2013 report Childhood under Fire.

Human Rights Watch also mentions sexual violence against children in two general publications, one about the detention of children and the second about sexual assault within Syrian prisons. The Office of the United Nations High Commissioner for Human Rights, which documents human rights violations in Syria, has also written several paragraphs about this topic in various reports.

Investigators said that the “UN was assembling proof of sexual violence endured by children detained by government forces in both official and secret detention centers”. UN investigators don’t hesitate to state that “this violence [against children] serves to humiliate, wound, obtain forced confessions, or to pressure a parent to turn himself in”.

The Syrian regime has started using sexual violence against children as a weapon in its repressive machine. This very first victim of this weapon was likely a Syrian boy named Hamza El Khatib.

On April 29, 2011, anger and unrest were rumbling across Syria. On that day, 13-year-old Hamza al-Khateeb was arrested by Syrian authorities during protest in Daraa. This round-faced boy would die in detention. A month after his arrest, Syrian authorities returned his horribly mutilated body to his parents, as if to send a warning to those clamoring for revolution in Daraa. Hamza’s small body bore many signs of torture. Among other things, his penis had been cut off.

This gruesome warning, however, did not play out to its desired effect. Instead, it set the country ablaze. Young Hamza became the first martyr of the Damascus Arab Spring.

“Treat Them In Same Manner As Adults”

To understand the extent to which this violence was systematic, one must to cross the Syrian border into southern Turkey, to an area called Antakya, where many former actors of the state’s repressive machine now live. One of them is Bassam Al Aloulou, 54, a former general in the Syrian army who was once the director of Aleppo’s civilian prison.

Zero Impunity met with him one morning in October 2016. It was the first time that Al Aloulou agreed to speak to journalists about the goings on inside “his” prison….

Al Aloulou, the former general, clings to his Muslim prayer beads, called a misbaha, yet he speaks with the military precision of someone who is used to giving reports.

“When I left, there were about 1,000 minors in the civil prison in Aleppo,” he says. “Most were criminals, but some had been detained to put pressure on their parents. To my knowledge, the youngest was 13 years old.”

Al Aloulou says that, Damascus has had a clear policy on detained children since Spring 2011.

“The Damascus committee [which includes the highest directors of each security branch in the Assad regime] ordered us not to differentiate between minors and adults. They told us: ‘Because they are at protests with the adults, we will treat them in the same manner’.”

Minors are no longer kept separately from the other prisoners. Now, they are imprisoned with adults, many of whom are common criminals.

The effects of these orders on child detainees were immediate and devastating: “The older prisoners started to exploit the younger ones. They forced them to carry out tasks like dishwashing and cleaning… they also raped them.”