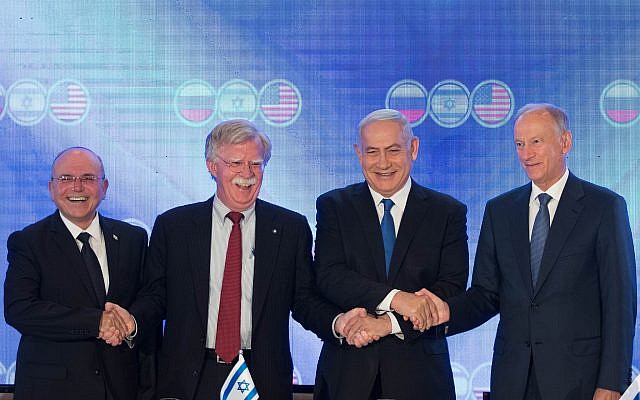 In an extraordinary meeting with the US and Russian national security advisors, Israel’s Prime Minister Benjamin Netanyahu has demanded the removal of all Iranian and Iranian-led forces from Syria.

Netanyahu played up to US National Security Advisor John Bolton and Russian counterpart Nikolay Patrushev, “I believe that there is a wider basis for cooperation between the three of us than many believe,” with “a real opportunity” for regional stability, “particularly in Syria”.

Alongside Israel’s long-standing security alliance with the US, Netanyahu has established co-operation with Russian President Vladimir Putin over Syria in a series of meetings since 2015, when Moscow launched its military intervention to prop up the Assad regime.

But the Prime Minister’s call for the withdrawal of Iran — the other essential ally of Bashar al-Assad — has not yielded any dividends, although Russia has accepted periodic Israeli airstrikes on Iranian and Iranian-led forces, their positions, and missile and weapons transfers to Lebanon’s Hezbollah.

See also the Netanyahu Show: A 7-Point Guide to Israel, the US, and Iran

Bolton said little of substance in his news conference after discussions with Patrushev and the head of Israel’s National Security Council, Meir Ben-Shabbat.

“We didn’t come with the expectation we were going to solve all the problems, or even most of them,” said Bolton.

He emphasized Iranian involvement in Lebanon, Iraq, Yemen, and Afghanistan as well as Syria and asserted that the Jerusalem meeting “helps everyone understand what the various positions are and we’ll go from there”.

Patrushev indicated resistance to Netanyahu’s line, saying Iran and Russia are cooperating in a fight against “terrorism”: “We have a mutual possibility to influence each other and we have an opportunity to listen to each other:

We understand Israel’s concerns and we want the existing threats to be eliminated so that Israel’s security be ensured. At the same time, we should remember that other regional states also have their national interests.

In an unusual reading of the situation, Bolton insisted that Patrushev was not supported by President Putin, “The Russians have said repeatedly that they would like to see Iranian forces leave.”

The National Security Advisor asserted that while Russia has been unable to obtain Iranian withdrawal so far, the summit in Jerusalem showed the three countries are working to “find a way to make it happen”.

Russia’s English-language State outlets are still silent about the outcome of the discussions, but The Times of Israel is vocal: “In Trilateral Jerusalem Summit, Russia Sides With Iran, Against Israel and US”.