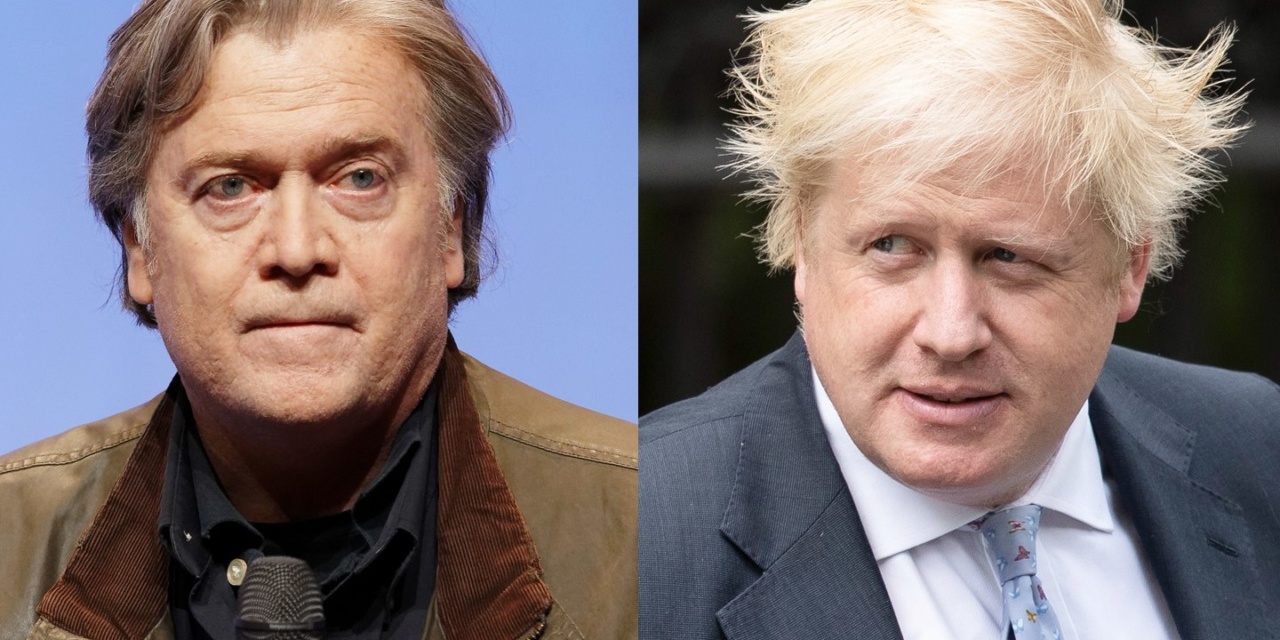 Johnson denied the discussions, despite evidence of the ongoing scheme, including endorsements by Trump. Now video testimony by Bannon confirms that the two men have plotted for almost a year.

Boris Johnson has denied his association with a man who is known for his far-right activism. A man who has said that British extremist Tommy Robinson “is the f—ing backbone of this country”, who told the French National Front, “Let them call you xenophobes. Let them call you nativists. Wear it as a badge of honor.” <>

Boris Johnson is being economical with the truth. He not only knows Steve Bannon, Donald Trump’s controversial former campaign manager and ex-White House chief strategist. Johnson has relied on the activist in his quest to move into 10 Downing Street.

A video, obtained by the Observer, shows Bannon talking openly about his relationship with Johnson. He explains how he helped Boris craft the first speech after his resignation as Foreign Secretary — at the time of Donald Trump’s first visit as President to the UK — in which Johnson tore into Prime Minister Theresa May’s Brexit strategy.

The footage of Bannon reading a July 16, 2018 newspaper and commenting on the strategy for Johnson — incorporate the themes of his “magnificent” speech during the 2016 Brexit referendum campaign — lays waste to Johnson’s denial last summer: “As for the so-called association with Steve Bannon, I’m afraid this is a lefty delusion whose spores continue to breed in the Twittersphere.”

It hasn’t been a good week for the Tory front-runner for the Prime Minister’s job. The police were called to the flat he shares with his partner, Carrie Symonds, in the early hours of Friday morning after neighbors heard a loud altercation with screaming, shouting, and banging. Team Boris has countered with photos of the couple “madly in love” and proclamations that they “want to get married as soon as time is right”. Pundits on the right such as Toby Young, Tim Montgomerie, and Allison Pearson have defended Boris’s “private matter as a private matter”, but now are happy for this not-so-spontaneous sequel to be displayed.

Trying to deal with Boris’s love affair with Bannon may be trickier. The footage of the strategist — pushed out of the White House in August 2017 but still in close contact with Donald Trump’s camp — was shot by the filmmaker Alison Klayman, who followed Bannon for her documentary The Brink, which is premiering next month.

The video was shot in the week that Johnson resigned over Brexit, as Bannon was in an ad hoc London headquarters to meet leaders of the European hard right, including former UK Indepedence Party leader — and Trump ally — Nigel Farage.

Bannon explains that he “met Boris Johnson…years ago”, but had “got to know him quite well” after Trump’s election victory in 2016″. As he reads The Daily Telegraph about Johnson’s resignation statement, under the headline, “Let’s Make Britain Great Again”, Bannon turns to the camera:

Today we are going to see if Boris Johnson tries to overthrow the British government. He’s going to give a speech in the Commons….

I’ve been talking to him all weekend about this speech. We went back and forth over the text.

In politics, there are no coincidences. Johnson’s resignation speech, “It’s not too late to save Brexit,” has been followed by harsh, derogatory declarations with targets from Europeans to Muslim women — the same tactics Bannon devised for Donald Trump over Mexicans, immigrants, and enemies within the US.

Even some conservatives are concerned. Matthew d’Ancona, the editor of the Spectator, wrote in September 2018, “Ignore Boris Johnson’s sex life. His flirtation with Steve Bannon is the real worry.”

For the Johnson-Bannon connection in July 2016 was far from spontaneous. Bannon had started discussions with Nigel Farage in 2011 about a UK version of the US Tea Party movement. Two years later, he worked with the Young Britons Foundation, an insurgency movement within the Conservative Party. As Peter Jukes summarizes, “Both Johnson and Trump have something else in common – they are opportunists willing to move with the times.”

Bannon’s association with Nigel Farage — now heading his new vehicle for attention and influence, the Brexit Party — has been featured in the press. After all, Farage flamboyantly held up a pint of beer and thanked his Trumpian mentor on March 30, 2017, the day the UK triggered its Article 50 departure from the European Union: “Well done Bannon. Well done Breitbart [the attack site run by Bannon]. You helped with this. Hugely.”

And Bannon returned the favor in a speech in South Carolina in 2018, saying Farage and UKP were foundational to Trump’s success: “I said, ‘That’s a canary in a mine shaft. We have to get a group there that sets up and covers that every day like Breitbart covers politics here. Because by following UIP, we’re going to understand the evolution of the Tea Party.”

But even if Farage is roiling the Conservatives and UK politics with the Brexit Party, he is not placed to become Prime Minister. So will Boris Johnson get the same attention for his collusion with Bannon?

On Sunday, former The Sun editor David Yelland noted that some newspapers like the Financial Times were paying attention but the BBC and other broadcast outlets were staying mum.

The Bannon story (Boris Johnson) is on front of @FT tomorrow but still not featuring on most broadcast I can see. Odd. Thank heavens for print which is leading this campaign whilst BBC (has to be said) flounders.

Today Johnson, accused of hiding behind the sofa to avoid any pratfalls on the way to becoming Prime Minister, will give a series of carefully-staged interviews — while Britons pore over the pratfall of his domestic dispute.

Meanwhile Bannon, in plain sight on film, will continue as the opportunist on the outside. He may have publicly stepped down from Breitbart, but the site thunders today, “Nigel Farage Exclusive: I Can Be Boris Johnson’s Best Friend or Worst Enemy… It’s Up to Him”.

As Farage explains, “Steve likes to be seen at the center of the action. He knows Boris, he speaks to Boris. Steve speaks to virtually everybody.”