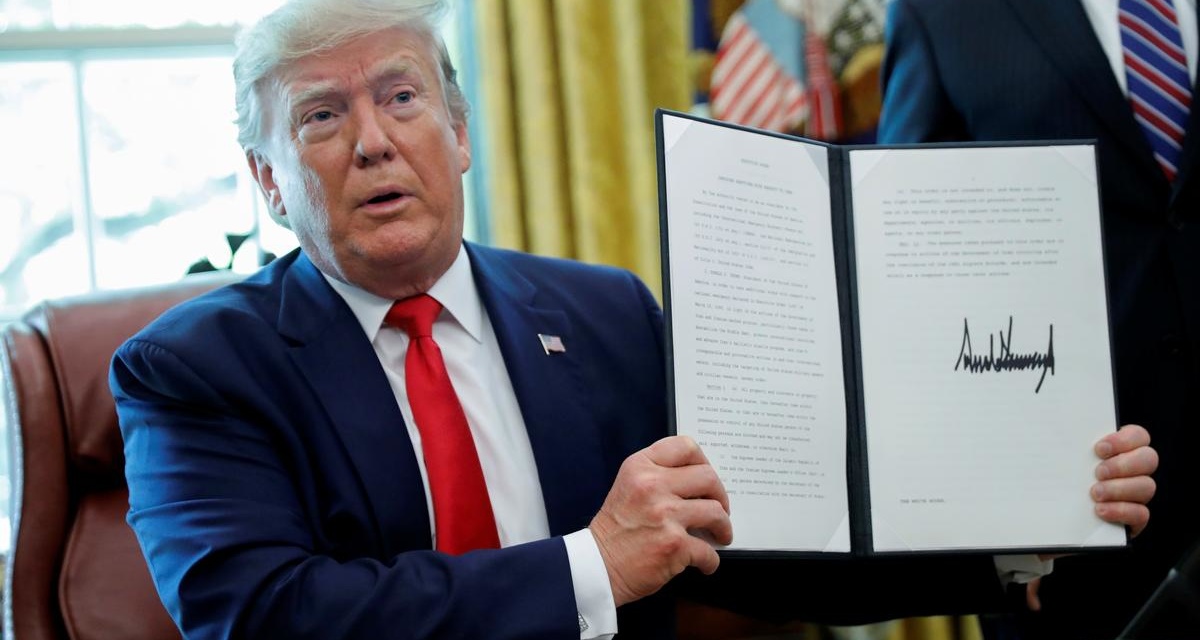 Iran’s President Hassan Rouhani has called the White House “mentally disabled”, in his televised dismissal of the latest US sanctions:

“Today, the Americans have become desperate and confused. This has made them take unusual measures and talk nonsense….

Tehran’s strategic patience does not mean that we are afraid. We do not fear America, and have shown restraint so far.

Rouhani mocked the “outrageous and idiotic” sanctions, “Iran’s Leader is not like those of other countries, who have billions in an account abroad so you can sanction it, seize it or block it. To sanction him for what? Not to travel to America?”

He said of measures against Foreign Minister Mohammad Javad Zarif, “You call for negotiations. If you are telling the truth, why are you simultaneously seeking to sanction our foreign minister, too? It is obvious that you are lying.”

The Trump Administration has imposed new, largely symbolic sanctions on Iran’s officials including the Supreme Leader, following last Thursday’s downing of an American drone by the Iranian Revolutionary Guards.

Donald Trump announced on Monday that the measures will prevent the officials from using the international banking system or any financial vehicles set up by European nations or other countries.

With comprehensive sanctions last November, tightened this spring, the US has already cut off Iran from the global financial system, including an attempt to block all revenues from oil exports. The regime’s officials do not have substantial assets in international banks, where they have long been at risk of being frozen.

The US step would have effects if Iranian official agreed a mechanism with the European Union for non-dollar trade in Iranian oil and other commodities and goods. However, Tehran rejected the EU’s launch of a limited Special Purpose Vehicle in early February, claiming “humiliating conditions” such as Europe’s concern about Iran’s missile program and activities in the Middle East.

Despite the limited practical significance of Trump’s announcement, Iran’s Foreign Ministry responded immediately with its own symbolic statement, through a tweet by spokesman Abbas Mousavi:

Imposing useless sanctions on Iran’s Supreme Leader and the commander of Iran’s diplomacy [Foreign Minister Mohammad Javad Zarif] is the permanent closure of the path of diplomacy.

The Supreme Leader has already barred talks with the Trump Administration as “poisonous”, forcing President Hassan Rouhani and Zarif to close off any option of dialogue.

Last week, after explosions damaged two tankers in the Gulf of Oman and before the downing of the US drone, Ayatollah Khamenei rejected mediation attempts by German Foreign Minister Heiko Maas and Japanese Prime Minister Shinzo Abe.

Judiciary chief Ebrahim Raisi said Iran is facing US “economic terrorism”, and Tehran’s Ambassador to the UN Majid Takht-e Ravanchi declared, “The US’s decision today to impose more sanctions against Iran is another indication that American does not attach any respect to the international laws and the prevailing international opinion.”

He reiterated the regime line that the US must stop “its economic warfare and terrorism against the Iranian people”.

Trump was under pressure to display firm action after his U-turn last Thursday on a US military response to the shootdown of the drone, approving but then quickly vetoing strikes on Iranian radar and anti-aircraft batteries.

He gave shifting and sometimes contradictory explanations over the weekend. Meanwhile, he clung to his hope of personal talks with Tehran’s leaders, saying he would be Iran’s “best friend” if it gave up nuclear weapons and praising the Iranians for not firing on a manned US spy plane which was in the same area as the downed drone.

See also EA on TRT World, Monocle 24, and BBC: Where Next in the US-Iran Conflict?

As he signed the executive order for the new sanctions, Trump said, “We will continue to increase pressure on Tehran. Never can Iran have a nuclear weapon.”

But he had already handed Iran another propaganda line, tweeting earlier in the day that the US military should not be in the Persian Gulf as America had no need of oil passing through the vital Strait of Hormuz.

….a dangerous journey. We don’t even need to be there in that the U.S. has just become (by far) the largest producer of Energy anywhere in the world! The U.S. request for Iran is very simple – No Nuclear Weapons and No Further Sponsoring of Terror!

The statement undermined recent Administration statements and US operations, including the move of a carrier strike force towards the Persian Gulf. About 1/6 of the world’s oil passes through the Strait of Hormuz.

.@realDonaldTrump is 100% right that the US military has no business in the Persian Gulf. Removal of its forces is fully in line with interests of US and the world. But it's now clear that the #B_Team is not concerned with US interests—they despise diplomacy, and thirst for war.

And, as he signed the executive order, Trump maintained his personal goal of a meeting wiht Iranian leaders — “I think Iran, potentially, has a phenomenal future” — while repeating that Iran would not only have to renounce any pursuit of nuclear weapons but also halt uranium enrichment for civil purposes.

Echoing Secretary of State Mike Pompeo’s 12 demands on the Islamic Republic, Trump also said Iran must quit “fueling of foreign conflicts” and “belligerent acts directed against the United States and its allies”.

Pompeo has also conditioned “unconditional talks” on Iran halting missile development, breaking ties with groups in the Middle East such as Lebanon’s Hezbollah, ending its support of Yemen’s Houthi insurgency, and withdrawing its troops from Syria.