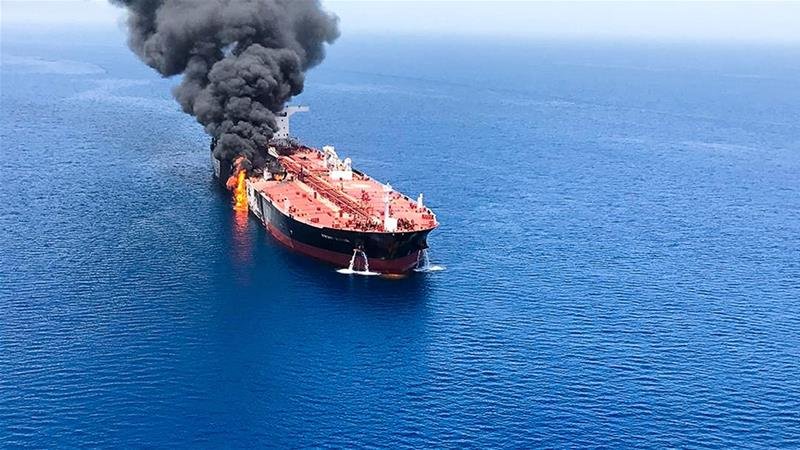 The stricken tanker Kokuka Courageous in the Gulf of Oman, June 13, 2019

Tensions surged on Thursday between Iran and the US, as two tankers were attacked in the Gulf of Oman, shortly after the Supreme Leader bluntly rejected mediation by the Japanese Prime Minister.

The Japanese-owned Kokuka Courageous and Norwegian-owned Front Althair were struck about 70 miles from the UAE coast, near the Strait of Hormuz, a vital waterway for tankers.

A total of 44 sailors were evacuated. One was injured.

By the afternoon, US Secretary of State Mike Pompeo was blaming Iran for the incident, which follows a May 12 attack with explosive devices on four ships — including two Saudi tankers — anchored in the UAE port of Fujairah.

Pompeo said US intelligence agencies reached their conclusion from the weapons used, the expertise and resources required, and the similarity to other attacks: “Taken as a whole, these unprovoked attacks present a clear threat to international peace and security.”

See also EA on Monocle 24: No War But US Pressure on Iran Continues
Is A War Coming Between US and Iran?

US Central Command released video which claimed to show a Revolutionary Guards patrol boat pulling up alongside the Kokuka Courageous and removing an unexploded limpet mine. On Thursday night, the US military released two photographs of the ship’s hull, showing damage and what it said was likely the unexploded mine.

Video from @CENTCOM allegedly showing an Iranian patrol boat removing an unexploded limpet mine from the Kokuka Courageous after the attack: pic.twitter.com/gXc0KNotEa

Even before Pompeo’s news conference, Iranian officials were firmly denying any involvement in the attack and pointing at others. Foreign Minister Mohammad Javad Zarif tweeted:

Reported attacks on Japan-related tankers occurred while PM @AbeShinzo was meeting with Ayatollah @khamenei_ir for extensive and friendly talks.

Suspicious doesn't begin to describe what likely transpired this morning.

Zarif stepped up the rhetoric — at about 3 am in Tehran — by blaming the “B Team” — US National Security Advisor John Bolton, Israeli Prime Minister Benjamin Netanyahu, and Saudi Crown Prince Mohammed bin Salman.

That the US immediately jumped to make allegations against Iran—w/o a shred of factual or circumstantial evidence—only makes it abundantly clear that the #B_Team is moving to a #PlanB: Sabotage diplomacy — including by [Japanese Prime Minister] Shinzo Abe — and cover up its #EconomicTerrorism against Iran.

I warned of exactly this scenario a few months ago, not because I’m clairvoyant, but because I recognize where the #B_Team is coming from.

At the UN Security Council, acting US Ambassador Jonathan Cohen repeated the blame of Tehran. Iran’s UN mission responded by denouncing the “inflammatory remarks” as part of “another Iranophobic campaign” of disinformation: “The US and its regional allies must stop warmongering and put an end to mischievous plots as well as false flag operations in the region.”

In their meeting, Abe said he was carrying a message from Donald Trump. Khamenei replied to the Prime Minister:

We do not doubt your sincerity and goodwill. However, regarding what you mentioned about the President of the US, I do not consider Trump as a person worth exchanging any message with and I have no answer for him, nor will I respond to him in the future.

The statement, circulated on Khamanei’s official website, went further with its denunciation of the Trump Administration’s May 2018 withdrawal from the 2015 nuclear deal between Iran and the 5+1 Powers (US, UK, France, Germany, China, and Russia):

The Islamic Republic of Iran negotiated for 5, 6 years with the United States and the Europeans — the 5+1 Powers — which led to an agreement. But the United States disregarded and breached this definite agreement. So, what common sense would once again allow negotiations with a state that has thrown away everything that was agreed upon?

The Supreme Leader then effectively sent Abe on his way. When the Prime Minister expressed his belief that the US is ready to hold genuine talks, Khamenei said, “We do not believe that at all. Because genuine talks would not come from someone like Trump.”

At the start of the week, Iran also pushed away German Foreign Minister Heiko Maas, criticizing European countries for not doing enough to give Iran an economic lifeline amid comprehensive US sanctions.

In February the European Union launched a limited Special Purpose Vehicle for non-dollar trade in Iranian oil and other commodities and goods. Iran rejected the mechanism, known as INSTEX, because of “humiliating conditions” such as Europe’s expression of concern over Tehran’s ballistic missile program, activities in the Middle East, and alleged bomb and assassination plots in Europe.

Iranian officials repeated the rejection of INSTEX even before Maas departed Tehran.