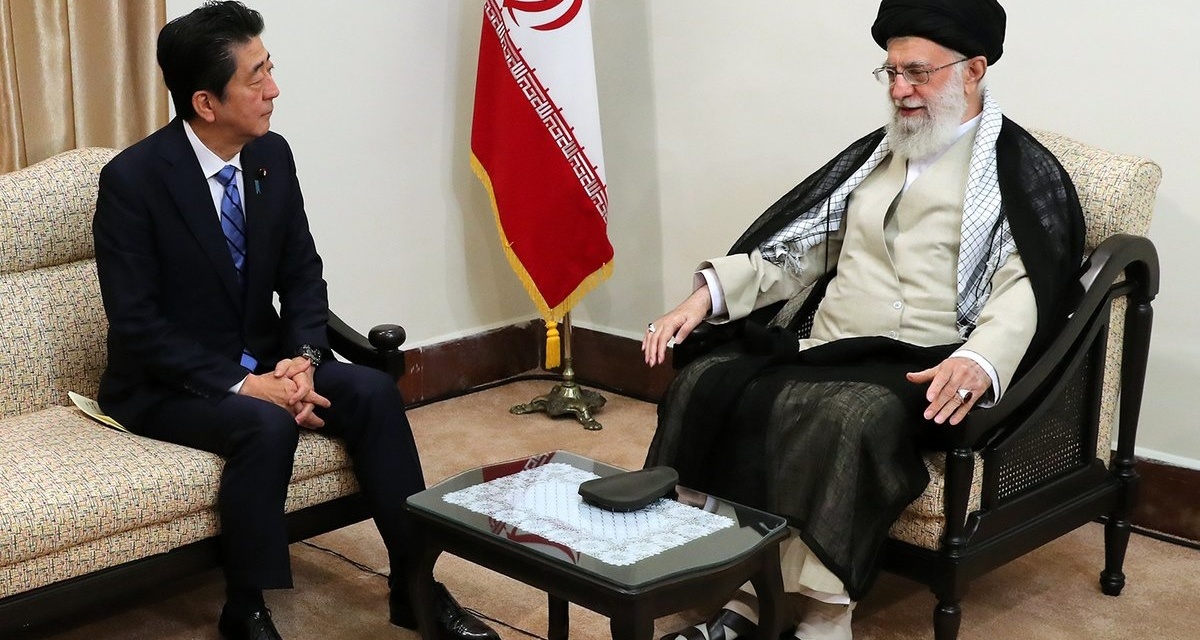 UPDATE 1230 GMT: The Supreme Leader appears to have rejected Japan’s mediation effort, as two oil tankers were attacked in the Gulf of Oman near the strategic Strait of Hormuz.

In his meeting with Japanese Prime Minister Shinzo Abe, Ayatollah Khamenei rejected any discussions with the US.

Abe said he was carrying a message from Donald Trump, but Khamenei replied to the Prime Minister, according to his website:

We do not doubt your sincerity and goodwill. However, regarding what you mentioned about the President of the US, I do not consider Trump as a person worth exchanging any message with and I have no answer for him, nor will I respond to him in the future.

He continued with reference to the 2015 nuclear deal, “The Islamic Republic of Iran negotiated for 5, 6 years with the United States and the Europeans — the 5+1 Powers — which led to an agreement. But the United States disregarded and breached this definite agreement. So, what common sense would once again allow negotiations with a state that has thrown away everything that was agreed upon?”

The rejection was driven home when Abe expressed his belief that the US is ready to hold genuine talks with Iran. Khamenei said, “We do not believe that at all. Because genuine talks would not come from someone like Trump.”

Meanwhile, two tankers were apparently attacked in the Gulf of Oman, about 70 miles from the UAE and close to the Iranian coast.

The Japan-owned Kokuka Courageous, flying a Panama flag, was en route to Singapore with methanol. The Front Altair, flying a Marshall Islands flag, was carrying naphtha for Taiwan.

A total of 44 sailors were evacuated. One was injured.

On May 12 four ships, including two Saudi tankers were hit by explosive devices while anchored in the UAE port of Fujairah. The US and Saudi Arabia suspect Iran was behind those attacks, but no evidence of Tehran’s involvement has been presented and the Islamic Republic denies any role.

Iran has quickly responded to today’s incident with condemnation, published an image of one of the tankers ablaze. 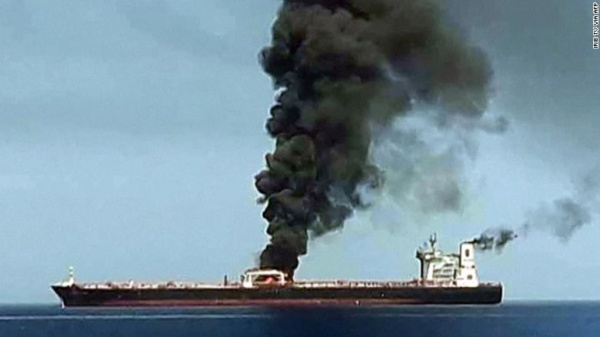 Donald Trump defensively tweeted, after news of Khamenei’s rejection, “I personally feel that it is too soon to even think about making a deal. They are not ready, and neither are we!”

He then circulated the video of Secretary of State Mike Pompeo blaming Iran for the attack on the tankers:

"It is the assessment of the U.S. government that Iran is responsible for today's attacks in the Gulf of Oman…."@StateDept @SecPompeo pic.twitter.com/sTIB0p1kCE

Abe arrived on Tuesday and has been Iranian officials in an attempt to maintain the 2015 nuclear agreement and avoid US-Iran military confrontation. On Thursday, he was hosted by the Supreme Leader.

There is a possibility of an accidental conflict and a military conflict should be prevented at all costs.

Amid rising tension, it is essential for Iran to play a constructive role in strengthening peace and stability in the Middle East, so that this region won’t be destabilized further or accidental clashes won’t happen.

Rouhani said, “Iran will remain committed to the deal, which is important for security of the region and the world. Tehran and Tokyo both oppose nuclear weapons.”

But the mood is far brighter than on Monday, when Tehran rebuffed German Foreign Minister Heiko Maas.

Iranian Foreign Minister Mohammad Javad Zarif chided European countries for not doing enough to give Iran an economic lifeline amid comprehensive US sanctions: “Those [who wage economic wars] cannot expect to continue living in safety.”

Maas cautioned Iran over its plan to quadruple provision of 3.67% uranium, technically breaking a provision of the 2015 nuclear deal, if the Islamic Republic is not satisfied with an European Union plan for a Special Purpose Vehicle to bypass the US sanctions.

Rouhani responded, “We expect Europe to stand up to and resist America’s economic terrorism against the Iranian nation and fulfill its obligations in accordance with the JCPOA [nuclear agreement].”

Rouhani mixed hope and warning in his statement alongside Abe. He said:

If there are some tensions, [their] roots stem from America’s economic war against Iran. Whenever it stops we will witness a very positive change in the region and the world.

However, he added that while Iran will not start a war with the US, it will respond “decisively” to any American attack.

Iranian officials have indicated their immediate objective is to get Japan’s lobbying for an easing of US sanctions on Iranian oil exports.

In May, the Trump Administration ended sanctions waivers for Iran’s top customers, including Japan, China, South Korea, India, and Turkey.

A senior Iranian official said, “Japan can help easing the ongoing tension between Iran and America….As a goodwill gesture, America should either lift the unjust oil sanctions or extend the waivers or suspend them.”

Iran’s official oil exports have fallen almost 60% since April 2018, adding pressure to an economy with serious problems over productivity, inflation, unemployment, investment, and a historically-weak currency.