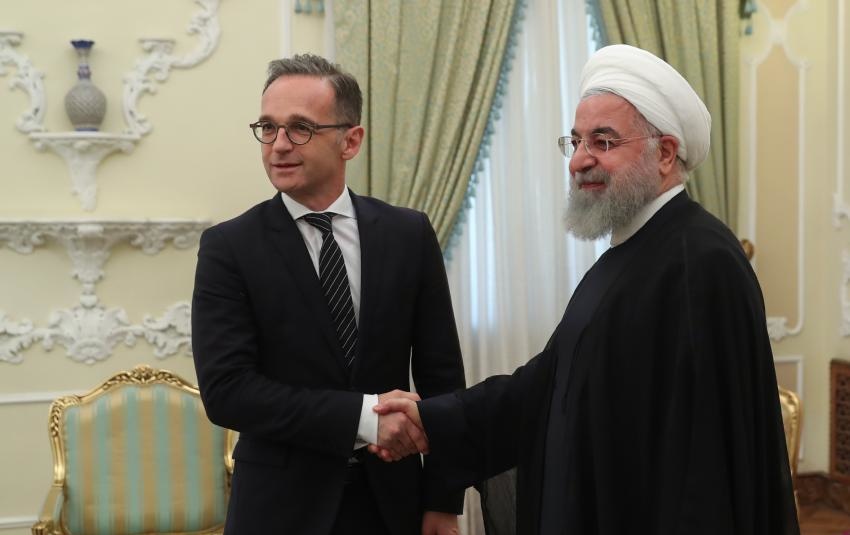 The Javan newspaper features a front-page cartoon of Maas with a swastika armband, a Hitler-style moustache, and a Nazi salute.

“The stinking leftovers of Nazism and fascism have manifested themselves in the spirit of the weakest Europe in history,” Javan says in it accompanying editorial. “[The European Union] sent its envoy to Iran to say ‘Europe cannot implement without America’s approval but cannot accept Iran’s refusal to deliver on some of its commitments’.”

And Kayhan, whose editor is appointed by the Supreme Leader’s office, invokes the provision to Saddam Hussein of materials for weapons of mass destruction, used in the 1980-1988 Iran-Iraq War.

“Germany, as one of the main suppliers of weapons of mass destruction to Saddam…should have apologized to Iran and reconsidered its policy instead of expressing concern over Iran’s defensive capabilities,” the paper thunders.

Iran has rebuffed Germany’s attempt to mediate conflict between Tehran and the US, criticizing Europe as well as the Trump Administration.

German Foreign Minister Heiko Maas met on Monday with high-level Iranian officials, including counterpart Mohammad Javad Zarif and President Hassan Rouhani. Maas hoped to ensure Iranian adherence to the 2015 nuclear deal, despite US withdrawal and comprehensive sanctions, as well as further distancing the Iranians and Americans from military confrontation.

See also EA on Monocle 24: No War But US Pressure on Iran Continues

But Zarif turned the occasion into a chiding of the Europeans for not doing enough to give Iran an economic lifeline, as well as denouncing the Trump Administration, Saudi Arabia, and Israel.

“Those [who wage economic wars] cannot expect to continue living in safety,” he warned.

Maas cautioned that, if Iran carries out its intention to quadruple production of low-grade 3.67% uranium from July 7 — quickly breaching the limit set by the nuclear agreement — Germany, France, and the UK will interpret the step as Tehran leaving the Joint Comprehensive Plan of Action.

But Iranian Foreign Ministry spokesman Abbas Mousavi countered by deriding the European proposal of trade arrangements to bypass US sanctions:

What the Europeans need to do and what they have done so far have failed to win our satisfaction….The first step which the Europeans took following the US withdrawal was rather late. We said back then that the step, although having created a tiny bit of hope, was overdue.

In February, the European Union launched a limited Special Purpose Vehicle (INSTEX) in February, bypass the sanctions with non-dollar trade in Iranian oil and other commodities and goods. However, Iranian officials rejected the initiative because of “humiliating conditions”, such as Europe’s criticism of the Islamic Republic’s ballistic missile program, Iranian activities in the Middle East, and alleged bomb and assassination plots in Europe.

Maas said on Monday that the European countries are still working to deliver INSTEX, but Mousavi dismissed him: “We haven’t put much hope in INSTEX. If INSTEX had been going to help us, it would have done so already.”

Rouhani: “We Expect Europe to Resist US”

President Rouhani did not reject Maas, but used him to put pressure on the Europeans, “We expect Europe to stand up to and resist America’s economic terrorism against the Iranian nation and fulfill its obligations in accordance with the JCPOA.”

Rouhani said that, despite Iran’s deadline of July 7 before it steps up production of low-grade uranium, that Tehran has shown patience in giving “other signatories a chance” before following the US in withdrawal from the nuclear deal.

The President castigated the Americans, “Regional security will never be achieved through imposing pressure and sanctions on the Iranian nation,” and Zarif went farther in attacks on US foreign poicy and Saudi Arabia:

Who is causing instability in this region? Did we give Saddam Hussain weapons? Did we back Al Qa’eda? Did we imprison the Lebanese Prime Minister?

Is it us who are bombing civilians in Yemen every day? Did we support Daesh [Islamic State and [Jabhat] al-Nusra or were they American weapons that Saudi Arabia gave them?