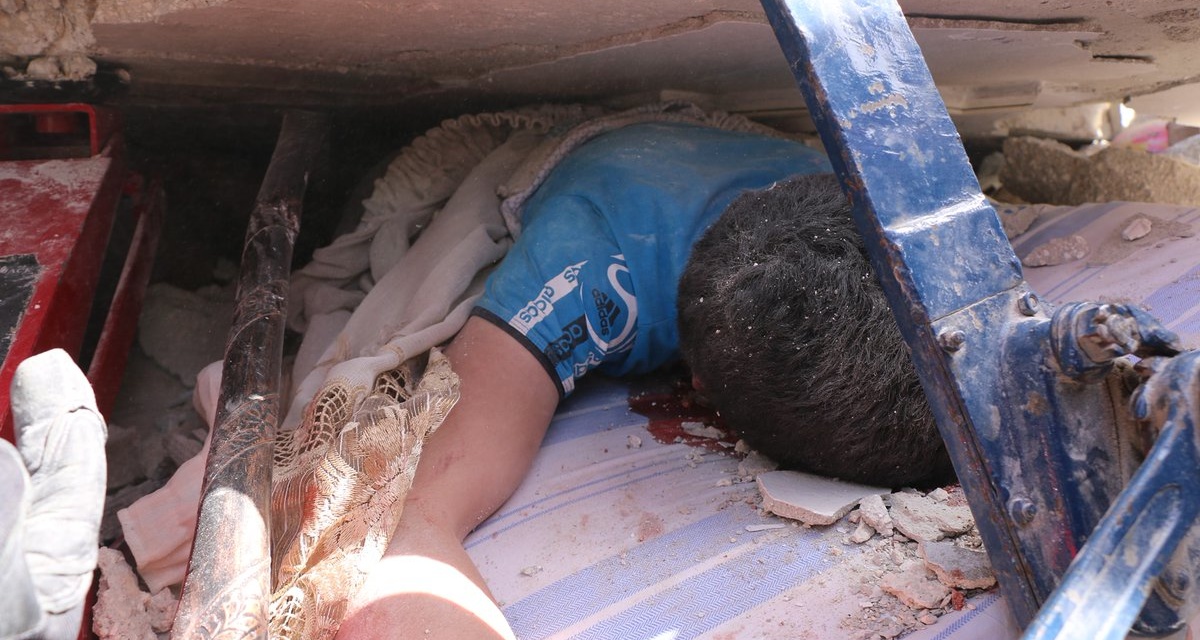 A slain boy lies under rubble from a pro-Assad attack on Ma’arat al-Num’an, Idlib Province, Syria, May 30, 2019

Pro-Assad forces have attacked one of the 12 Turkish observation posts around Idlib and northern Hama Provinces.

The post is in northwest Hama, rebels and the Islamist bloc HTS reportedly launched another counter-attack on Friday in the area north of the town of Qal’aat Al-Madiq.

Qal’aat Al-Madiq was captured by the Russian-regime offensive in initial days in early May. But the advance has been checked by the rebel response.

Meanwhile, doctors have confirmed that eight hospitals in northwest were bombed by Russia and the Assad regime after coordinates were shared with Moscow in the hope of preventing attacks.

The UN gave the GPS locations, supplied by NGOs operating in Idlib, to Russia as part of a “deconfliction mechanism”.

The hospitals are among 28 medical facilities attacked in the past month. They include a maternity hospital in the town of al-Atareb, which had to evacuate premature babies.#

However, UN officials are reluctant to criticize Moscow or Damascus over the attacks.

Hedinn Halldorsson, a spokesperson for the Office for the Coordinator of Humanitarian Affairs, said it was “too early” to determine whether health facilities under the “deconfliction mechanism” had been attacked:

Some of the locations may have been deconflicted with relevant parties. The UN is gravely concerned by the number of health and education facilities struck in northwest Syria in recent weeks.

Extraordinary how in a 6 minute interview UN's Humanitarian Affairs Chief @UNReliefchief avoids saying Syria & Russia are bombing hospitals in north Syria's #Idlib & that 3 million civilians there have “nowhere to flee to” because Turkey's border is closed https://t.co/2dO0LsANQE pic.twitter.com/o1q04kxGso

Six civilians, including three young brothers, were killed on Thursday in the latest pro-Assad bombardment of northwest Syria.

The victims were in Ma’arat al-Num’an, south of Idlib city. The town has been regularly bombed by Russia and the Assad regime since an escalation of attacks from mid-February, shattering a demilitarized zone declared by Moscow and Turkey last September.

The horrified wails of children punctuate one of the last day of the holy month of #Ramadan. Today the target was #MaaretNuman City. Five civilians were killed in this attack, 3 were brothers. The parents of the boys were rescued alive and 1 brother was pulled from the rubble. pic.twitter.com/8TV9Qxmc5f

Since April 28, Russian-regime attacks have killed about 300 civilians — most of them women and children — and injured more than 800. More than 300,000 of the estimated 3 million people in Idlib and northern Hama Provinces have been displaced.

A total of 24 medical facilities have now been destroyed or damaged by Russian and regime bombardment, according to the Syrian Network for Human Rights.

Russian-regime bombing is also targeting crops in western Aleppo Province, hoping to choke the food supply to residents — about 20% of Syria’s remaining population — in Idlib and northern Hama.

The European Union said on Wednesday, “We expect the Syrian regime and the Astana guarantors [Russia, Turkey, and Iran] to fulfill immediately their responsibilities and commitments, and ensure the immediate protection of civilians.”

However, the international community has taken no action to check what the UN has called a “humanitarian disaster”. Despite having troops alongside rebels in the northwest since August 2016 — and co-sponsoring the demilitarized zone which has been broken — Turkey has not responded publicly beyond limited statements of concern.

There are claims, however, that Ankara has covertly stepped up arms supplies to rebels who have faced a Russian-regime offensive in northwest Hama and neighboring northeast Latakia Province since May 6.

And on Thursday, Turkish President Recep Tayyip Erdoğan called for a ceasefire and political resolution, in a phone call with Russian counterpart Vladimir Putin.

The offensive, which began May 6, took several towns in northwest Hama. However, it was checked by a rebel counter-offensive, and a series of attacks has failed to take the key mountaintop town of Kabani in neighboring Latakia Province.

"Be well Abdouda .. don’t worry don’t worry, he is asleep, he is a sleep"
Moments of the White Helmets team’s work to save a child from under the rubble and recover the bodies of his 3 brothers who were killed by the regime’s warplanes air raids on #MaaretNuman City this morning. pic.twitter.com/SiAEbNe1zM