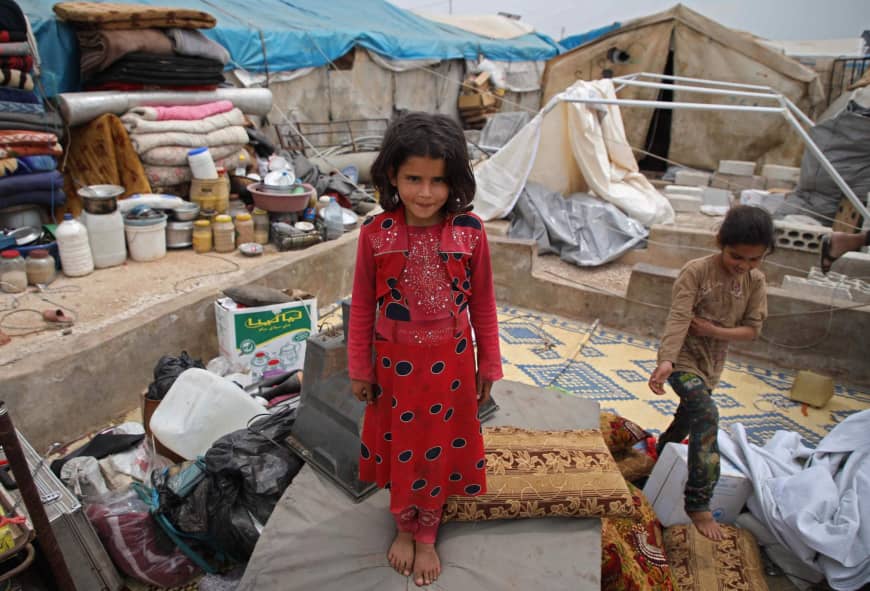 A displaced Syrian girl at a camp in Atmeh, Idlib Province, spring 2019 (AFP/JIJI)

At least 200,000 more civilians have fled Russia-regime ground and air attacks in northwest Syria, the last major opposition area in the country.

The United Nations and the Union of Medical Care and Relief Organisations (UOSSM) each said on Thursday that more flights had been forced by a Russia-regime offensive on northern Hama Province and bombing of neighboring Idlib Province.

Many tens of thousands had already fled before the offensive began on May 6. Despite a demilitarized zone declared by Russia and Turkey last September, Assad forces bombarded parts of Idlib and northern Hama, with Moscow contributing occasional airstrikes.

Idlib and northern Hama are home to an estimated 3 million people — 20% of Syria’s remaining population — many of them displaced from other parts of Syria by pro-Assad attacks.

Most of the recently displaced have sought refuge along the border with Turkey. With camps already overcrowded, new ones have sprung up near the frontier wall. Some people have resorted to sleeping under trees.

An estimated 44,000 people have moved to the regional capital Idlib and another 50,000 have gone to Ma’arat al-Numan, despite recurrent regime airstrikes and shelling — including an attack on a marketplace that killed 12 people Tuesday night.

The UN confirmed that since the end of April, there have been 20 attacks on healthcare facilities and one on an ambulance. Nineteen facilities, serving at least 200,000 people, have been bombed out of action.

The UOSSM said at least 229 civilians had been killed during the four weeks.

The Russia-regime offensive captured several towns in northern Hama but has been pushed back by rebels and the jihadist bloc Hay’at Tahrir al-Sham this week.

A counter-offensive regained the town of Kafr Naboudeh and is putting pressure on Qalaat al-Mudiq. Pro-opposition activists said the regime took heavy losses, including the capture or killing of commanders, with rebels seizing heavy weapons such as anti-tank missiles.